At the Beatles own official website there’s a lot of info about “Love” their 2006 album, which is not only the soundtrack to the Cirque du Soleil performance show celebrating the Beatles music, but also a controversial departure for the Beatles in that its made up of some of their best-known songs remastered and re-mixed with sounds and songs from across their extensive catalogue. “Love” is produced by longtime Beatles producer Sir George Martin and his son Giles, and it won two Grammy Awards in the categories Best Compilation Soundtrack Album for Motion Picture, Television or other Visual Medium, and Best Surround Sound Album.

For dedicated Beatles fans and collectors it proved to be a bit of of a challenge. Firstly, had the Beatles done the unthinkable and started to mess with the canon? Debate still continues as to whether this was a smart move, or a folly. Additionally, there were numerous release variations to buy if you were an avid collector. Two CD versions, promotional CDs, and other bits and pieces to track down for the completists amongst us…

To start with there was a single disc with the standard stereo mix in a standard jewel case: 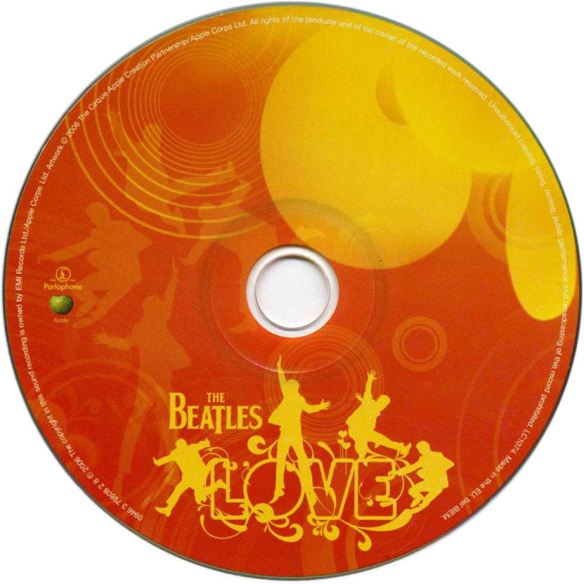 Then there was a two-disc set that came with more elaborate packaging. It’s a double fold-out Digipac in a thick slipcase. The package contains the single CD with the standard stereo mix (but with a slightly different printed image on the CD to the single version CD shown above). Added to this is a separate DVD disc containing the 5.1 surround sound mix. Same track list and songs – but if you have a 5.1 stereo set-up at home, the songs and sound effects surround you. It has the same booklet as the single CD release.

The final official commercial release (which came out a few weeks after the CD’s) was the vinyl LP. It arrived in a deluxe, 2 disc, gate-fold package. Mine is still sealed, so these images I’ve borrowed from the web. 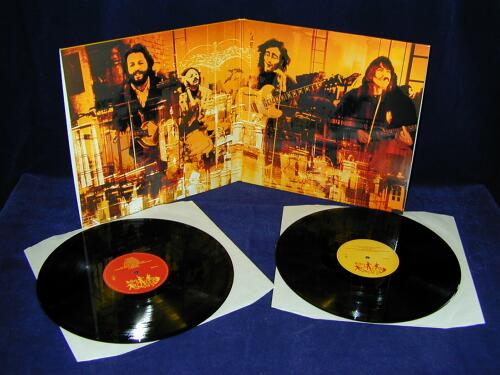 As you can see the vinyl edition came with custom labels for each LP, and is contained in a gate-fold cover with a large-format book. Its similar to the CD booklet, but because of the large format – complete with rich colour images from the Cirque du Soleil production – it is way more impressive.

There was also a four-song radio sampler released to stations around the world. This was done in an effort to generate publicity and conversation about the forthcoming new Beatles release for 2006. The songs on it were “Strawberry Fields Forever”, “Octopus’s Garden”, “Lady Madonna” and “While My Guitar Gently Weeps” (which was one of the most anticipated tracks from the whole album as it was George Harrison’s original demo tape of the song accompanied by a completely new string arrangement composed by George Martin for the new “Love” record). This promo CD was sent out with a press release containing quotes from Sir George Martin and his son Giles – who co-produced the album – talking about the four tracks on the promo CD. They describe how those songs were selected and give some of the background to the production techniques employed in mashing together different parts of Beatles songs to pretty much make completely new versions -a radical thought at the time. The cover of the radio sampler promo CD looks like this:

Apple/EMI was obviously determined to give “Love” the full promotional and marketing treatment because they also pressed and distributed (in limited numbers) a special “Interview Disc” featuring Paul McCartney, Ringo Starr and George and Giles Martin in conversation about “Love”. The interviews were recorded in October 2006, and they are all stand-alone statements about dirrent aspects of the work that went into producing “Love”, and the running order works through the release track-by-track. Its an interesting historical artifact to have in the collection. And definitely an authentic, original release. As you can see, again it has a colour variation of the “Love” artwork common to all releases: 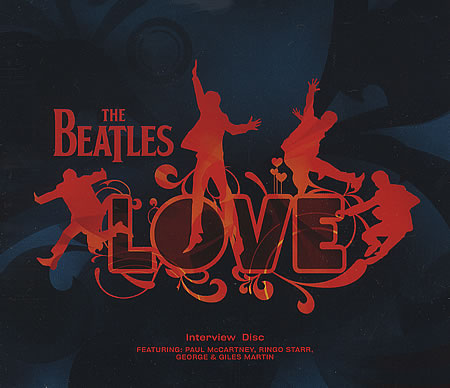 This disc is entirely spoken word and contains edited voices only. No music. The idea was that radio stations would get the songs from the official CD and make their own radio specials. For a time there on the web, via Ebay and the like, there was also a disc called “The Beatles Love – Radio Special”, purportedly distributed by Capitol in the US. I got a copy of this but, while someone has gone to a lot of trouble to make it look authentic, there is something suspicious about this one. The special is hosted by a DJ named Andre Gardner. If you Google him he seems legit, very much associated with covering Beatles news, hosting a show on WMGK in Philadelphia and having a Facebook page dedicated to the Beatles. Now, Capitol may well have commissioned this radio special and hired Andre to host it. It does have additional material to the official “Interview Disc” in that there are comments on “Love” by Olivia Harrison and Yoko Ono in addition to Paul, Ringo, and George and Giles Martin. And it comes with an official-looking running sheet, with track details and outcues. Here’s a short extract from the program:

There are some images of this CD below. If anyone can shed any more detail on this release – drop me a comment and let me know…. 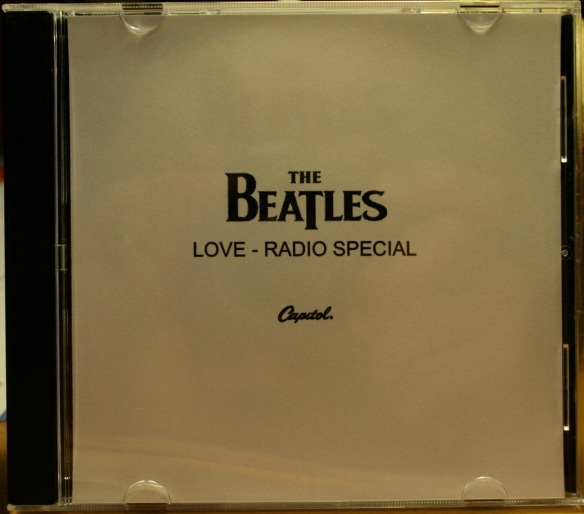 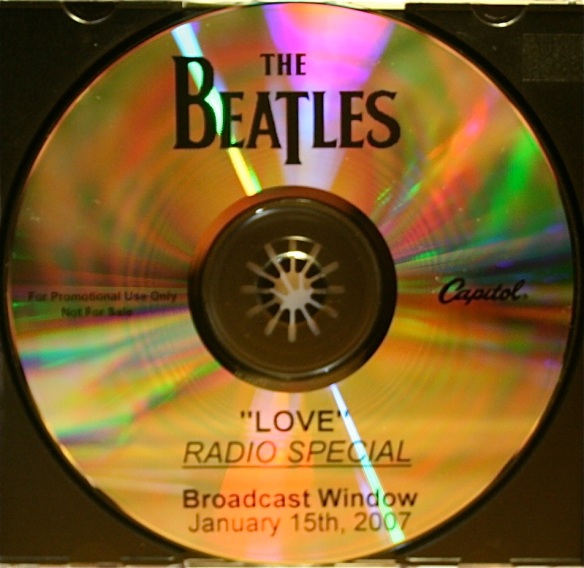 Meanwhile….at the time of the “Love” release the Beatles official website had not long been launched (it looked quite different to it’s present incarnation), and Apple used the new site to deliver a series of five down-loadable podcasts to further promote “Love”. Each was between six to seven minutes in duration, and like the official “Interview Disc” above, it contained extracts 0f Paul, Ringo, George Martin and Giles Martin talking about “Love”. Hosted by UK presenter Robert Lindsay, it contains music extracts mixed with the spoken word extracts. Quite nice to have.

Yet another spin-off for collectors was the DVD “All Together Now”, a documentary film about the creation of the Cirque du Soleil show and the accompanying soundtrack CDs. Earlier this year took out a Grammy Award for Best Long Form Music Video. (I posted about this at the time).

"Love" - the "All Together Now" DVD documentay

You can still see “Love” by Cirque du Soleil at The Mirage Casino in Las Vegas. MTV reviewer Gil Kaufman saw the show just last month (April, 2010) and had this to say. The Beatles own site has some fun facts about the “Love” show.

Finally, an official printed promotional cardboard flyer for the two CD releases came my way. Its about foolscap size, and is four pages in all – the front looks like this: