Skip to primary content
Following my post on some of the release variations I have in my collection of the Beatles “Love” CDs and LP, I had a note from Ned in the United States who has a very interesting and unique CD single from the “Love” releases.
He has in his collection this rare Japanese promo CD single: 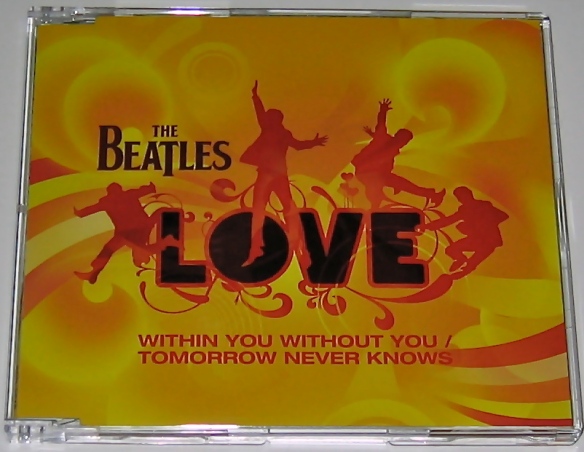 As you can see above, it has the familiar bright yellow “Love” cover art work – but it contains just one track from “Love” called “Within You Without You/Tomorrow Never Knows”, a mash-up mix by George and Giles Martin of the basic track and vocal from “Within You Without You” (originally released on “Sgt Pepper”), and the drum track from “Tomorrow Never Knows” (taken from “Revolver”).  Giles Martin said “This was the first thing we did (for the “Love” project). We played it for them (Paul and Ringo) and they said ‘we want more like that!’  We had to remind them, ‘Fellas, you know that on most songs you did actually change chords!”  George Martin said at the time: “‘Within You’ is not the most memorable song, but it’s much more interesting with that rhythm.”
According to Ned this CD single was created for Japanese radio stations and issued by EMI Japan without the full knowledge of EMI’s London office. When they found out it was withdrawn shortly after release, thus making it a very collectable item. “It is absolutely NOT an unauthorized release but remains the only CD single issued from the “Love” project”, says Ned.

It has a nice insert that lists the other tracks on the full CD release:

Ned writes: “I mail ordered this from Japan right at the time of the opening of the show in Vegas.  I believe it ran me around US$20 – including shipping.  I have no idea what the value is now as I only collect what I like and not what might be worth something someday.  Apparently, Yoko Ono had (has) the same collecting philosophy and it has served her well.
Ned has two other favorite Beatles-related items. One is a still-sealed, 4 CD Lennon box from 1990 with a blank space on the back cover art where the song “Imagine” should be listed (the song is on the disc, however). “I bought this one from a woman going through a bad divorce.  She only wanted US$15 for it.  Even though I was very much interested I IMPLORED her to ask for more because I knew she could get it.  However, she insisted because, to her, it represented her former husband.  (Years earlier, I had regretfully sold my copy…and I was desperate to get a copy back in my possession).”
The other item is a withdrawn, mid-80’s CD release of Lennon’s Shaved Fish – manufactured in Japan for the U.S. market – that has slightly different artwork on it. “It was withdrawn because EMI either failed to use “No-Noise” on the master tapes or the tapes they did use were from inferior sources.  Either way, the hiss is more apparent than the common one.  But the fact that it was quickly pulled off the market makes it of interest”, says Ned.

But back to the “Love” promo CD. “Promo Sample” is printed in Japanese around the hub. The catalogue number on the disc is PCD-3275. 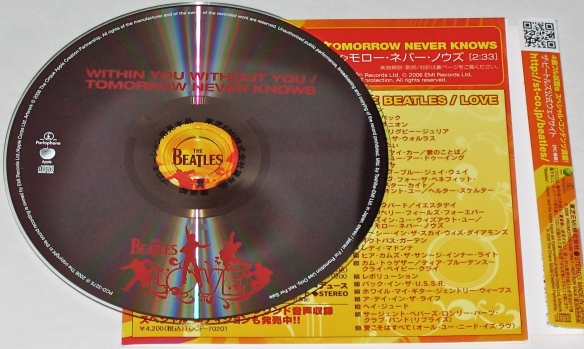 Sincere thanks to collector Ned for all the info and photos. Here’s a clearer picture of the black  promo writing around the center of the CD single’s hub: 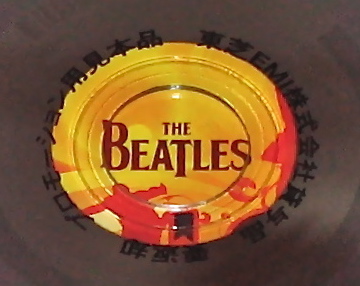