OK. I’m going to preface this first post on some unusual CD and DVD items I acquired in a South East Asian country with a statement that I don’t collect Beatles bootlegs and I don’t support or promote piracy in the music business. All my collection to date has been made up of legitimate, officially released discs – that’s CDs, LPs, singles, books, DVDs, magazines and other printed items.

Recently I was able to spend some time on holiday in Vietnam. Like most Asian and developing countries there are many opportunities to buy fakes – everything from Louis Vuitton luggage and Gucci handbags to Ray Ban sunglasses and Tag Heuer watches. Of course there are lots of stores, markets and street vendors selling illegally copied DVD films as well. There are not so many places to buy music – but they’re there if you seek them out. In the central Vietnamese city of Hue I walked into a store selling mostly fake DVDs and a bit of music on the side and saw a copy of Paul McCartney’s latest 2 CD release “Good Evening New York City”. It was easy to tell it was a fake. It came (like all the cheaply copied DVDs do) in a flimsy clear plastic bag (i.e. no hard jewel case or Digipac cardboard). The artwork was all there ready to put it into a CD jewel case, but it looked like a cheap photocopy. The discs had rudimentary labels printed on them but clearly looked fake. No catalogue numbers, copyright info, not even the title of the disc. One disc had the words “Paul 1” printed roughly on it, the other “Paul 2” and that was it. It was selling (in the local currency) for 20,000 Vietnamese Dong – that’s US$1.03, or $1.17 Australian. And that’s even before any bargaining over the price. I decided I really didn’t want to buy a copy – even for the novelty value.

At the other end of the scale are those CDs and DVDs where its obvious that a lot of time and effort has gone into producing what looks to be an absolutely legitimate release. Standing in a shop in Hanoi (which I did last week) it becomes really hard to tell. Is what I’m looking at the version sanctioned by the artist and record company as the official release for China and South East Asia?

Take this example of the Beatles “Anthology” 5 DVD box set. I got it from a shop in Hanoi that was filled with what looked like official releases. All movie stock was in standard DVD packaging with proper labels. It was not one of the shops dealing in fakes.

It looked like this. Here’s the front of the box: 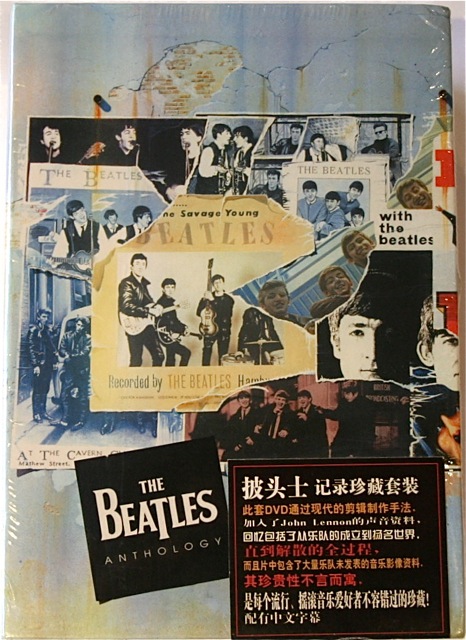 This copy still has the shrink-wrap around the sturdy cardboard box, though the opening has been cut by me so that the DVDs can be removed. The sticker is attached to the shrink-wrap.

Compare this to this official release purchased in Australia:

Here are the Chinese DVD spines:

Compared to the official release:

The number “12” in the pink circle on each refers to the censorship rating in Australia. Apart from that, not a lot of difference….Here is the sticker on the base of the Chinese version:

Sticker on base of Anthology DVD box - Chinese

As you can see, the Apple word is written but the Apple logo itself is missing. Also, apparently common with cheap copies, there are small spelling mistakes. Notice in the centre box of the sticker the words “Doldy Digital 5.1 surround sound”. It should be Dolby Digital 5.1 sound. This sticker appears to be stuck over the printed label actually on the box. You can faintly see the bar code, etc. underneath. Otherwise the Capital, Abbey Road, DVD Video, Dolby Digital and DTS logos on the right-hand side all look legit. Compare it to the Australian official release, where the label is printed onto the box:

Notice the official release has a Parlophone logo instead of Capitol which is just a territory thing (Parlophone seems to get half the world, and Capitol the other half!). There’s also a Region 1 DVD symbol, and a bar code.

Inside the individual DVD containers the story is similar. The actual discs in the Chinese version are very well-printed and look very official:

They even say “Printed in the USA”. Compare this to the official release:

However, the Chinese stuff up the sequencing of labels on the DVD discs.

The other noticeable difference to the official release is that the Chinese versions don’t have the small booklets inside each DVD box outlining the contents of each episode. These are in official release and look like this: 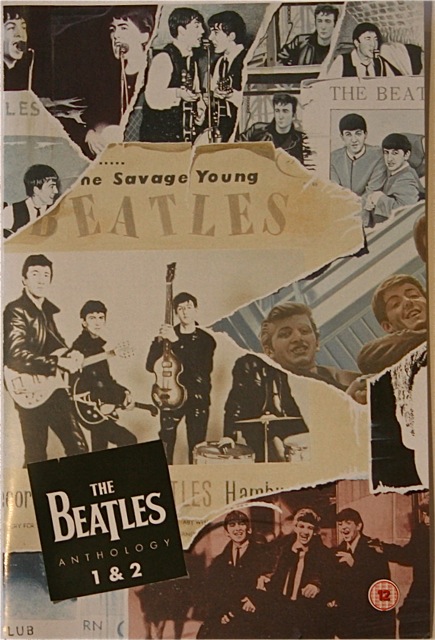 Anthology booklet (rear) - inside each DVD box of the official release

So, you can see that standing in a shop in Hanoi, deciding if this is official or not (especially while it’s still sealed up in its shrink-wrap) is very tricky. The price might have been a give-away: this 5 DVD box set cost 250,000 Vietnamese Dong. That’s around US$12.80 or AUS$14.80. Very cheap. It also doesn’t help if you don’t read Chinese. Here’s a close-up of the sticker on the front:

Sticker on the front of the Anthology DVD box set

Vietnam is actively cracking down on pirate or illegal copies of DVDs, CDs, clothing and watches. While there I read an article in one of the national papers that police are actively trying to break up the flow of counterfeit goods from across the border in China. When departing the country via Ho Chi Minh City airport all travelers bags are X-Rayed separately to the usual security check specifically to identify and confiscate goods, or to fine travelers for having fake DVDs. A New Zealand family in front of us were caught. They had in their bags over 60 copied DVDs they’d bought on the street. They were given the option of handing them over, or keeping them and paying a fine of US$50.00 (at first they were asked to pay a US$100.00 fine, but talked the official down…interesting). They decided the pay the fine and keep their DVDs. All the CDs I had purchased, plus the Beatles “Anthology” 5 DVD box above were in our suitcases and were also X-Rayed. We were not stopped by the airport officials. I’ll detail some of the Beatles compact discs I purchased in the next posts. Again it was confusing and difficult to pick the real from the fake.

4 thoughts on “Some Unusual Asian Beatles Items….Part One”