This blog is sub-titled “Adventures in Collecting Beatles Music”, and this post continues an examination of some South East Asian Beatles releases purchased in Hanoi on a recent trip to Vietnam.

Further investigation of these hasn’t categorically ruled out their legitimacy but it seems more likely that they’re actually illegal fakes that someone (in China) has taken a lot of time and trouble to manufacture to make them appear very much like official releases…..

In Part One I wrote about the 5 DVD “Anthology” box-set I found in Hanoi.  This next post is about a series of six double CDs called “The Beatles Double Golden Collection”:

It’s a series where two Beatles albums have been released in one CD box, each with an outer cardboard slipcase. The ones I was able to purchase were: 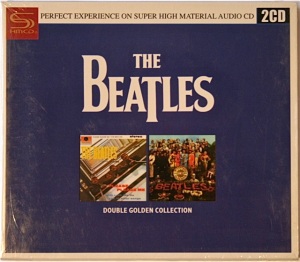 Please Please Me and Sgt Pepper 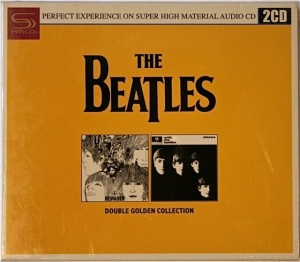 Revolver and WIth the Beatles 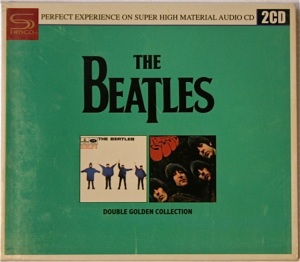 Abbey Road and Let It Be 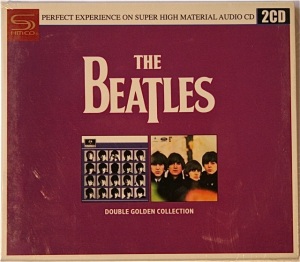 Each CD has the same documentaries as those found on the recent stereo “Beatles Remastered” discs. So, its clear that these CDs came out following the October 2009 release of those new “remastered” CDs.

If that’s the case then I can only assume that there must be at least two more titles in the “Beatles Double Golden Collection” series. There should be one that has the 2 CD “The Beatles” (White Album)”, and one for the 2 CD “Past Masters” release.  These would then fill out the catalogue. The shop in which I purchased the CD’s above mustn’t have these two titles in stock at the time – so I was able to get only these six.

These releases are interesting for a couple of reasons. As you can see above, they have a large logo at top left of the packaging for something called SHM-CD or “Super High Material CD”.  According to the internet this is “…an advance in the materials used in the production of Compact Discs that uses super quality, enhanced transparency polycarbonate material in the manufacture of CD’s”. The aim of this is to improve the sound. A Google search reveals what looks to be legitimate information about SHM-CD . It says it was invented by Universal Records and the Japanese electrics company JVC – both well-known and respected companies. This official-looking website has more information about the technology and some of the releases on SHM-CD. The rear of the slipcase also has some detailed information (in Chinese) about SHM-CD – see the top right-hand side of the image below (click on the image to make it larger):

Slipcase for Magical Mystery Tour and Yellow Submarine, with panel about SHM-CD

I’d really love to hear from anyone out there who can read Chinese and can shed some light on what the small print says, or who knows if these are legal Chinese copies of Beatles discs.

As to the contents of each CD, they appear to be exactly the same as the recent Beatles Stereo Remastered series – and the quality of the recordings is first rate. The 2-CD jewel cases are not of a standard size but larger in every dimension. You can see this clearly below when they are placed side-by-side with a standard CD jewel case:

The spines are also wider than standard:

Inside there are two CD’s on a swinging inner “door” with CD disc “A” on one side and CD disc “B” on the other:

The booklets in the “Double Golden Collection” contain lots of photographs of the Beatles. There is no text in the booklets at all. All the photos are exactly the same as those found in the booklets which come with the latest official Beatles “Remastered” series:

Here’s a closer shot of one of the CDs in the set: 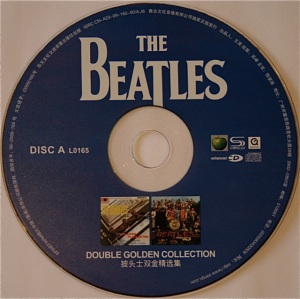 The rear cover of the jewel case details all the songs on the two albums. Notice the reference to the the special mini-documentaries. These were produced by Apple and accompany each album in the “Remastered” series as well:

Rear cover of the CD jewel case for "Please Please Me" and "Sgt. Pepper". Notice the last track for each title is the "making of" mini documentary for each album - just like in the official "Remasters" series

Again, the official logos (including Apple) and even a bar-code appear, making it tough when you are standing in a Hanoi record store trying to decide if these are indeed legitimate releases sanctioned by the Beatles and their record company Apple Records. If these are fakes whoever produced them has gone to extraordinary lengths to make them appear to be legitimate Beatle releases.

The other thing is – since returning home I’ve researched these titles fairly extensively on the web and can find nothing about them. I think that this post may be the very first to detail them.