Just secured (via Ebay) a copy of the very limited, re-released 7″ vinyl single “Band on the Run”.

It’s a 45rpm single that is apparently only being distributed in the US to some of the Record Store Day shops. Its part of the build up to the forthcoming re-issue of the album “Band on the Run”, which will be available in a number of formats.

Haven’t got the single in the post yet – but here are some photos: 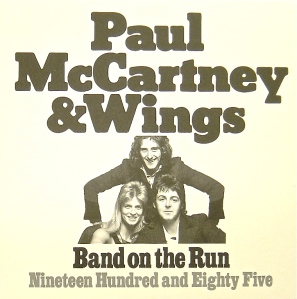 Taken from the forthcoming Paul McCartney Archive Collection reissue, the paper sleeve front cover replicates the original U.S. and European single releases which came out in 1973 (1974 in the UK).

The rear though gives away the fact its a 2010 release with its bar code and references to Concord Music and Hear Music – Paul McCartney’s new record label since he left EMI.

Originally this would have been released on the Apple label, but this time around its a plain black and white label from Concord Music:

Back in 1974 in the UK the B-side was a song called “Zoo Gang”, but everywhere else it was another track from the “Band on the Run” LP – “Nineteen Hundred and Eighty Four”:

Much thanks to Wogblog – who once again was the first with the info that this special and limited Paul McCartney and Wings vinyl single was going to be released.

3 thoughts on “Band on the Run – Limited Edition 45 Single”