On December 13 the WogBlog site featured a video of a brand new Paul McCartney song performed for the first time at the big fundraiser concert for Hurricane Sandy held at Madison Square Garden. Paul called out former Nirvana members Dave Grohl, Krist Noveselic and Pat Smear to back him on a brand new and rocking song called “Cut Me Some Slack”:

Turns out the song will also feature in a new, feature-length documentary and album directed and coordinated by Dave Grohl called “Sound City”:

It’s about the legendary recording studios called Sound City, in the Los Angeles San Fernando Valley, which was (as the press release says): “….home to countless legends, capturing their magic on two-inch tape, decade after decade. It was witness to history. It was rock and roll hallowed ground. And it was our best-kept secret.”

“Sound City was state-of-the-art when it opened in 1969. It soon became known for churning out one rock and roll classic after another. Featuring a legendary, one-of-a-kind Neve recording console, and arguably the best tracking room in America, many of the seminal albums of the ‘70’s, ‘80’s and ‘90’s were put on tape within these walls: classics by Fleetwood Mac, Neil Young, Tom Petty, Metallica, Nirvana… The list is staggering.”

McCartney’s “Cut Me Some Slack” will feature in the film and on the soundtrack CD release – both out in February:

You can download the Australian press release about “Sound City”. The US dates are here. And there’s a cool poster for the film: 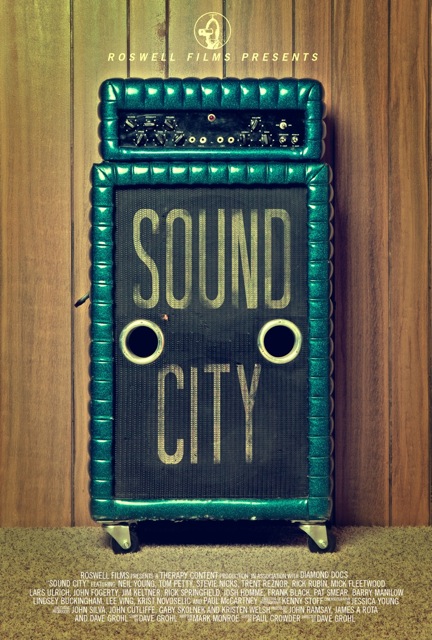