A recent trip to Canberra, Australia’s capital city, afforded a visit to the second-hand store  Flip Side Exchange which specialises in CD’s, vinyl and DVDs.

Found this great DVD there: 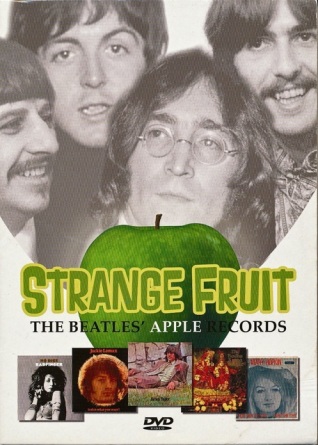 It is a 2012 documentary on the Beatles’ record, film, publishing and electronics company Apple. Reviewer Carlos Gonzales wrote at the time of release: “….other than their music, the Beatles tried to do something good for their fellow man, in this case struggling musicians that needed a break, a chance. It was then that they created Apple Records, and the wonderful Strange Fruit -The Beatles’ Apple Records provides us with an honest view and great, historic information about the history of the label and its artists.

The film is quite long (162 minutes), and it is loaded with history and music…..Strange Fruit -The Beatles’ Apple Records [tells] how the label began working on projects, beginning with the production of the film “The Magical Mystery Tour.” They then signed singer-writer Jackie Lomax, Mary Hopkin, The Iveys, James Taylor and others. They also made the Beatles White album. By 1969, the Beatles — pushed by John Lennon — hired Allen Klein, who promised them that he would clean up their finances. That year they signed Billy Preston, The Iveys became Badfinger, and the Beatles began disintegrating as a group. From then on, the filmmakers examine year by year everything that happened to the label, ending in May 6, 1975, when Apple announced that it would cease operations. Along the way, we learn about other groups that were signed by Apple….for example, Ravi Shankar, Yoko Ono, John Tavener, Modern Jazz Quartet, and Brute Force. Of course, we hear some of their music along the way.

The movie has interviews with some of the players, such a Jackie Lomax (who said that Apple Records was ‘utopia’), Ron Griffiths (from the Iveys), Joey Molland (Badfinger), and others. There are also interviews with historians, like Stefan Granados, Chris Ingham, Mark Paytrees, and more. In the end, we are told that Apple was a “curious disappointment in the history of rock music. A revolutionary label that never reached its potential.” And the big lesson, perhaps, is that “artists can not take care of other artists.” You will be the judge. Strange Fruit — The Beatles’ Apple Records is a great document of our times. With no apparent help from or sanctioned by the Beatles, the documentary tells the history of this controversial — for lack of a better word — music label.”

It’s a must for all collectors of the Apple Records releases.

For a sneak preview: