Over at The Beatle Forum there’s a bit of a discussion happening at the moment about a record that John Lennon was carrying into the EMI Abbey Road Studios. He’s being interviewed on the steps of the studios in 1966 for the UK weekly television series Reporting ’66, made by Independent Television News (ITN):

The video is quite interesting in itself as it has all four Beatles arriving at Abbey Road and being quizzed on the band’s future directions.

The question is: is that a record John has under his arm? And if so, what is it?

Here’s a still from the video, plus some close-ups: 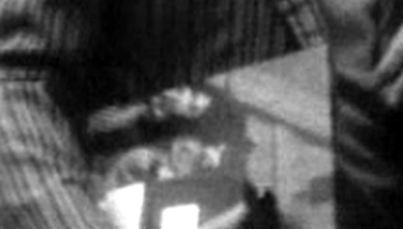 Can anyone out there help identify the record?

You can see more in the Beatles With Records series here (just go to the links at the bottom of the page).