Quite a few more photos of the Beatles holding or working with records have come in so it is time for a further instalment of our series The Beatles With Records.

The Liverpool Echo news site is reporting that the stereo radiogram shown in this picture of Ringo Starr and wife Maureen is up for auction:

Maureen is shown sitting on the custom-built record player and radio which was built for the couple when they lived at 34 Montagu Square, London in 1965. It was a quality piece for the time with a Garrard turntable, a British Leak valve amplifier, and an Armstrong tuner with twin speakers. Also in the photo are at least four Beatle gold records, plus a shelf stacked with LPs of various kinds.

According to the Echo, Ringo gave the radiogram to his Auntie Everley and Uncle Jim at 59 Madrin Street, Liverpool, which was Ringo`s Grandad`s house. It has been in his Aunt’s possession since 1966 and has just surfaced after almost 50 years:

The radiogram is just one of the lots in the Liverpool Beatles memorabilia Auction to be held in the Paul McCartney Auditorium there on August 29. We first featured the photo of Ringo and Maureen at home back in The Beatles With Records – Part Two.

Lots of records in the front window – and the arrow points to one record cover that may give a hint as to the date. It is Dylan’s The Times They Are A-Changin’, which came out in January, 1964: 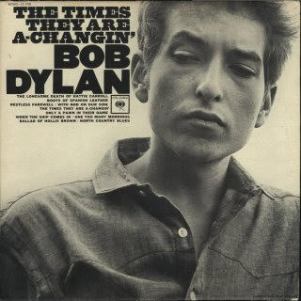 Lots of other LPs and EPS there in the window. Anyone else recognise anything? (The image was kindly sent through by Billy Shears at the SgtPepperChannel on YouTube).

Back in The Beatles With Records Part Twenty Five we showed a photograph of George Harrison with the Radha Krsna Temple and an Apple single they’d released (and he produced) called ‘Govinda’.

Here they are together again – this time in 1970 – and one member is holding another single of their Apple singles, ‘Hare Krishna Mantra’:

(Again, thanks to Billy Shears for sending through those images).

The topic of George Harrison brings us to model Patti Boyd, who later became his wife. Before they were married she featured in a number of photo shoots with Beatle records. Here’s another. This time Patti is holding a UK mono copy of With The Beatles, from 1963: 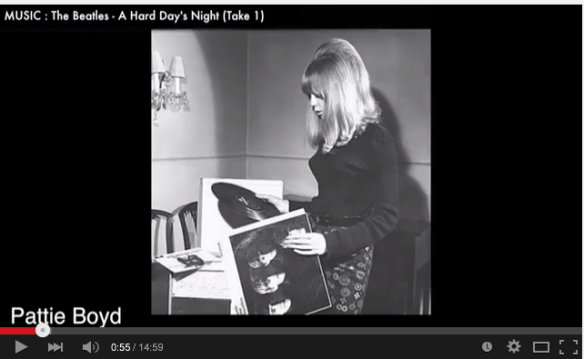 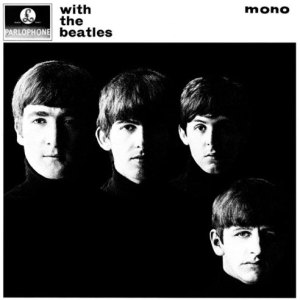 And we’ve just had the anniversary (on August 11) of John Lennon apologising to the American people for his “the Beatles are bigger than Jesus” comment. It led to some very odd and sad scenes of LPs and singles being publicly destroyed, these ones below live on air on radio…. 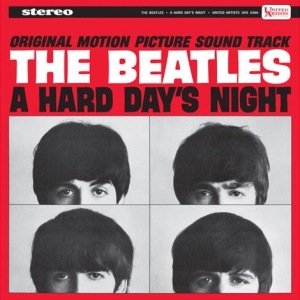 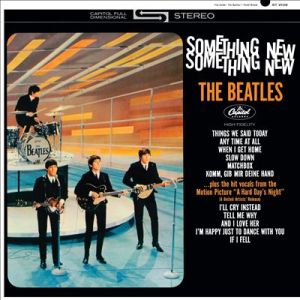 Jumping ahead in time, here’s Lennon at home with what looks like an acetate or test pressing in front of him (on the bed, lower right). Impossible to tell what it might be though: 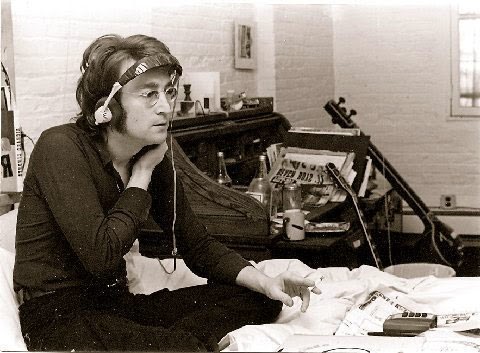 And John Lennon again, this time in what looks like a U.S. radio station studio with DJ Scott Muni:

This image looks very much like another photo from the same day, taken at the radio station WNEW-FM in New York. John was on the publicity trail for his album Rock’n’Roll. The two men are wearing the same clothing (Lennon a tee-shirt, and Muni a shirt and light coloured knitted sweater). You can see this photo in The Beatles With Records – Part Three:

And to finish a video of Paul McCartney, performing live at the famous Amoeba Music record store in Los Angeles on Wednesday, June 27, 2007. Here Paul is literally surrounded by vinyl and CD’s in the hundreds and thousands:

Just two obvious cover shots from the posters on the wall behind him…..You will no doubt spot a lot more:

And here is the full video:

Check out all the posts in this series here.