Does anyone remember when Paul McCartney’s Flaming Pie – the Archive Collection Edition – was officially released?

Oh yeah, it was back on Friday, July 31. Seems like such a long time ago now.

It was officially announced on June 12: 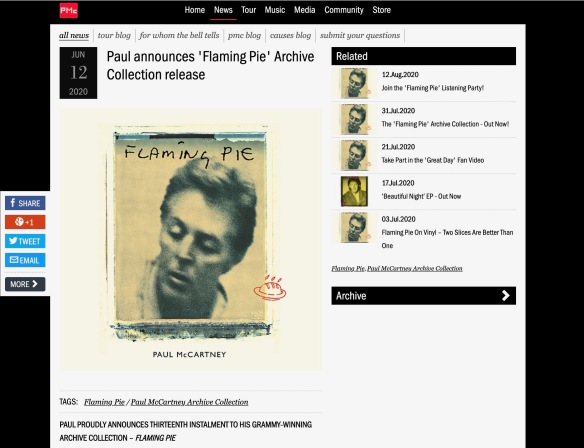 Back then, just after that first announcement, we posted this article on some of the items the forthcoming deluxe box set would contain, some of the rarities that’ve previously been released only as B-sides, etc.

It was an exiting time, expectation was building and we dutifully pre-ordered from the Paul McCartney official store site.

Well, it’s now September 3 and we are still waiting for our box set and LP’s to be delivered here in Australia. I know these are weird times and we’re in the middle of a pandemic, but patience is running a little thin.

Things were looking really good early on. The day after the official release, August 1, we got this hopeful email:

It’s on its way! But the helpful tracking info soon revealed that it didn’t get very far.

When you think about Paul McCartney and his “store”, you tend to think it might be in Britain. But no, our box was coming from the USA. By August 11 the package had been “received by the partner carrier” and, from what we can tell, was taken to a loading facitlity in New York. We guess this was somewhere near one of the big airports, either John F. Kennedy or La Guardia. And there it sat. And sat.

The package didn’t move from this spot for so long we wrote to Customer Service at the McCartney store. To their credit they responded immediately saying it had “….probably missed a scan somewhere”, and assured us that our Flaming Pie goodies were indeed making progress.

It took until August 22 for the tracking site to register that the package had finally “Departed Terminal Location”. Woo hoo! Progress.

On August 29 we got a note it had in fact arrived in Australia.

On the other side of the country.

Australia is a lot bigger than most people realise. We’re talking 3,280 kilometers or 2038 miles away by air.

And as of today, five days later, that’s where it remains. So close, yet so far.

I know. First World Problems. It’s only music, and in the scheme of things a tiny inconvenience. Everyone is trying their hardest, trying to keep things as normal as possible. And the number of flights between the USA and Australia is now severely curtailed, while the number of people seeking home delivery for just about everything has risen exponentially. Times are tough.

But is anyone else in the same boat as us and still waiting for their Flaming Pie to be delivered? Let us know in the comments box below.

9 thoughts on “Beatle Music Collecting in the age of COVID”