The newly re-issued Apple Records compact discs are available separately, or if you really want to lash out, as a complete box set containing 17 discs. The box is called “Fresh From Apple Records“.

Its a very flimsy box, printed to look like a wooden crate containing apples, and made of thin cardboard – so you need to take a lot of care when opening it and putting discs in and out. The rear of the box lists the content:

The box “lid” opens at the top only and there are two flaps either side:

As you can see, the cardboard is pretty thin and will tear easily…..Looking down on the box when it’s open here’s what’s inside: 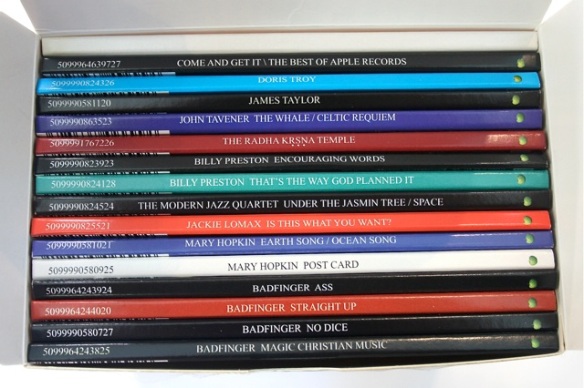 All the CD’s come in gatefold cardboard sleeves, and in the box set you get an “extras” double disc as a bonus, plus the “Come and Get – It Best Of Apple Records” disc:

This disc, which comes with a really nice booklet (as do all the CDs), contains some tracks replicated on albums in the box, but also a lot of previously difficult to find Apple singles that were never released on albums. These include songs like “Saturday Night Special” by The Sundown Playboys, “Give Peace a Chance” by the Hot Chocolate Band, “King of Fuh” by Brute Force and the instrumental “Thingumybob” by the Black Dyke Mills Band. Inside the gatefold of “Come and Get It” they have reproduced some original Apple Records press ads:

Just about every CD in the box has bonus material, but there also an extra two CD set (available only in the box) which contains all the bonus material that was initially only going to be available by digital download. There is one whole CD of bonus Badfinger material. The other CD of bonus tracks is shared by Mary Hopkin and Jackie Lomax. These two CDs come in a gatefold cover: 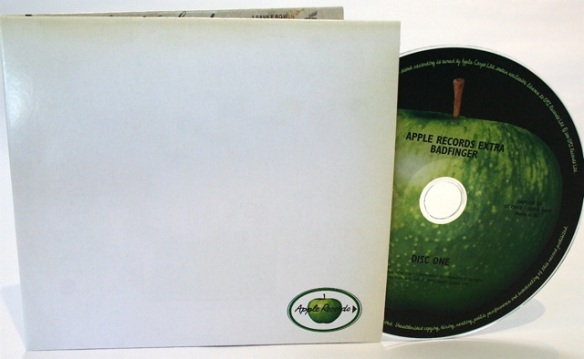 The front cover of the 2 CD “Extras” discs

This cover on the outside is plain white, with some intentional “yellowing” around the edges to make it look old. That Apple logo on the bottom right-hand corner isn’t printed on. Its a sticker: 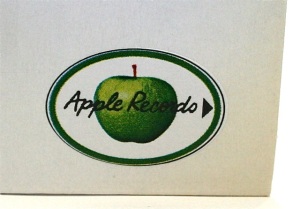 Inside the gatefold they have reproduced the Apple Studios original tape boxes and used this look to give the track listings for both CDs:

There are two reissues in the box which contain two original Apple LPs. These are the Modern Jazz Quartet with “Under the Jasmine Tree” and “Space” both on one CD:

The other is classical musician and composer John Tavener, who had two LPs original released on Apple Records – “The Whale” and “Celtic Requiem”: 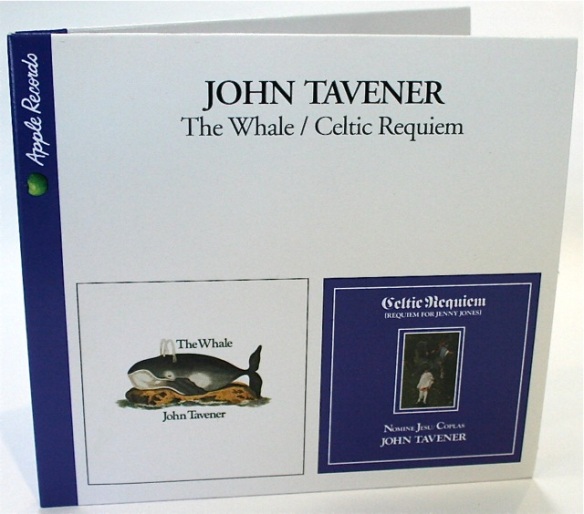 One of the late additions to the 2010 reissue plans was the disc by the Radha Krsna Temple. It was added after the initial announcement of the extensive Apple reissues back in August this year. It contains a single bonus track this time around – and (if you haven’t seen it before) it has a fantastic front cover:

There are two CDs from Billy Preston (“That’s The Way God Planned It” and “Encouraging Words”), two from Mary Hopkin (“Post Card” and “Earth Song-Ocean Song”), and no less than four CDs from Badfinger (“Magic Christian Music”, “No Dice”, “Straight Up” and “Ass”):

Other CDs come from Jackie Lomax (“Is This What You Want?”), James Taylor (“James Taylor”), and Doris Troy (“Doris Troy”).

It’s not the first time these titles have appeared as re-issues. There was a previous reissue program which started in 1991 and continued over a couple years.

All in all it’s a pretty nice set. It is good to have all these discs freshly re-mastered and gathered together in one place. I think though, for the money, they might have provided a more interesting (and sturdy) box to contain them…

6 thoughts on “Fresh From Apple – The Apple Box Set Unboxed”