To mark what would have been George Harrison’s 75th birthday in February there’s to be a major re-issue of the great 2003 Concert For George recordings and film.

For the first time the concert will be available on vinyl (as a four LP box set); new CD/DVD and CD/Blu-ray combo packages; plus not one – but two – super deluxe boxed special editions.

Both boxes come with these contents: a gold-colored, fabric-wrapped box with a die-cut mandala window to display a numbered cutting from the original hand-painted on-stage tapestry backdrop used during the Royal Albert Hall concert on November 29, 2002; the complete sound and film recordings from the concert (on four 180-gram audiophile LPs, 2 CDs, 2 DVDs and 2 Blu-ray discs); plus a 12”x12” hard-bound 60-page book. The sets also include a note from Olivia Harrison, explaining the story behind the tapestry. The “basic” set costs US$350.

However, for an extra $100 you can get that same deluxe box, plus what is described on the site as a complete set of “…authentic Test Pressings (4-discs), pressed at Quality Record Pressings (QRP)”. There are only 15 copies of these Test Pressing sets available worldwide.

For those after the new vinyl pressing of the Concert For George here’s the pack image with its contents: 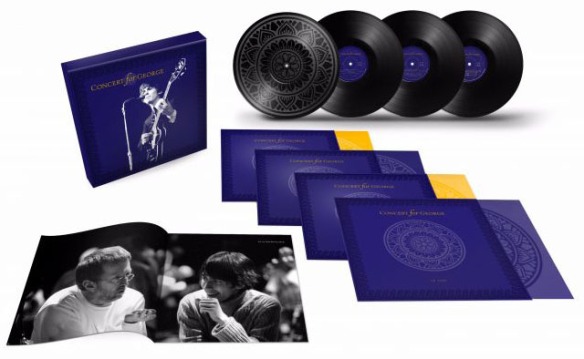 As you can see above the four LP set only stretches across 7 sides, and so Side 8 on LP 4 features a cool-looking etched mandala.

The new 2CD sets with either 2 Blu-ray or 2 DVD included look like this:

These bundles are identical in content except for the Blu-ray which contains an additional ‘Drummers’ featurette not available on the DVD version.

The original two CD set is also being re-issued:

All these Concert For George versions will be reissued on February 23. Proceeds from the sale of these products support The Material World Foundation.