Klaus Voormann has a new book due for release in the first week of August called Birth of an Icon – Revolver 50.

It celebrates the background story to his now classic front cover design for the Beatles Revolver LP, released on the 5th of August, 1966.

His book, done in a graphic novel style, tells the story from his perspective as a musician and artist who was called by upon by the Beatles, then nearing the height of their fame, to come up with something special, something new, different and lasting.To say he was put under pressure is something of an understatement.

It looks like it’d be a really interesting read.

Pre-orders for The Birth of an Icon – Revolver 50, which will be hand-signed by Klaus Voormann,  have a pre-sale price 46 Euro (+ shipping & handling costs).

“…it is good for me to see the other side of a story I know so well and to realize aspects like the sheer panic that Klaus must have felt at being asked to do our album cover. In the end, the Revolver cover was a classic and this book is another.”  – Sir Paul McCartney

“…your Revolver book – it brought back such great memories – even farther back than Revolver…I hope it sells a million copies!…the Revolver cover was incredible and perfect for that album.” – Ringo Starr 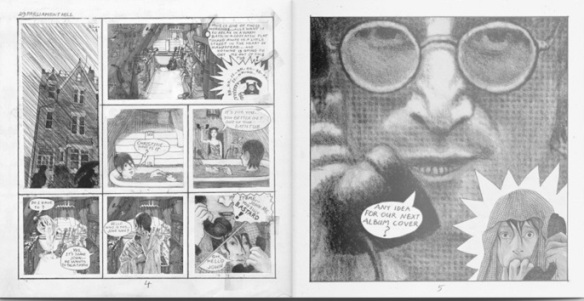