I have had in the collection for some time now a record that I thought was an original US pressing of the Beatles Let It Be.

You know the one. It comes in a gatefold cover, red Apple label on the vinyl, catalogue number AR 34001, red Apple on the rear cover: 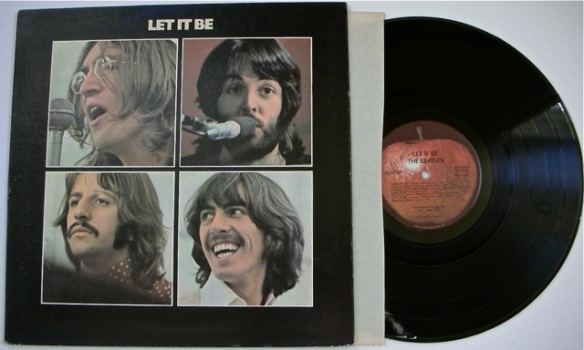 The copy I have had for oh, maybe 30 years, looked genuine enough. That is until I read that this is one of the most counterfeited vinyl records of all time…..

When I started to look into it some more I discovered that what I had in my collection was actually a fake.

And it was only two weeks ago, after finally picking up a genuine copy at a record fair, that I could conduct a side-by-side analysis to spot the differences. Here are the tell-tale signs.

Firstly a close-up of the real cover:

And here is the illegal copy:

As you can see the skin tones on the photo of George Harrison are much more grainy on the fake. Also notice the white borders around each photo. They are much thicker on the counterfeit.

Next, a close-up of the red Apple label. The genuine copy is first, the fake is second: 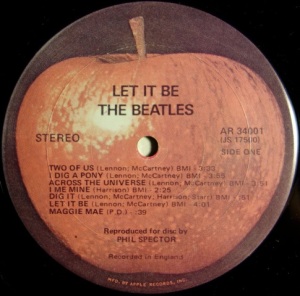 The counterfeit label lacks vibrancy. It is washed out and dull.

The best proof that you have a legitimate copy is in the run-out area of the vinyl itself. There should be the words “Bell Sound” stamped there on both sides (the fake will not have this). It’s difficult to photograph but here goes. First, Side 1: 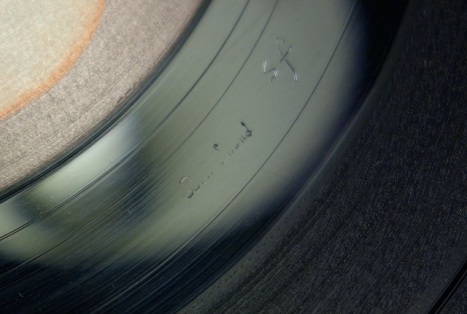 Genuine Let It Be pressings with the red Apple were mastered at Bell Sound by a guy named Sam Feldman and that’s why you can see his initials “sf” scratched into the vinyl above. Fakes don’t have that Bell Sound stamp, but the people who made the illegal copies did try to imitate the originals by including the “sf” initials too.

Furthermore, legitimate pressings will have the letters “IAM” in a triangle in the run-out area of the vinyl. It should be properly machine stamped there on both sides like this:

The fakers tried to imitate this too – but it they did just a crude drawing which you can see here:

(By the way, the “IAM” in the triangle stands for the International Association of Machinists Union whose workers ran the pressing plants).

It was Sam Feldman who also scribbled the words “Phil + Ronnie” on the deadwax. This was for Phil Spector (who produced Let It Be) and his wife, singer Ronnie Spector:

Non-legitimate copies also have “Phil + Ronnie” scratched in the play-out area of the disc but the writing is much smaller.

So thats it. Your guide to real and fake copies of Let It Be.