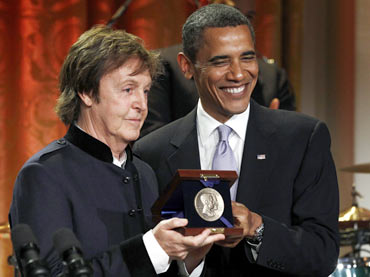 Paul McCartney was in the East Room at the White House this week to receive the Library of Congress Gershwin Prize for Popular Song from US President Barack Obama. It’s just the third time the award has been presented.

From Glen Levy at TIME Magazine:

“It’s sure to be a pop culture reference point for years to come: Sir Paul McCartney performed for the Obamas at the White House on Wednesday in light of the Beatle being presented with the third annual Gershwin Prize for Popular Song. He followed in the formidable footsteps of Stevie Wonder and Paul Simon.

You would imagine that the possibility for puns in pieces such as these would be endless when it comes to the songs he could sing but Macca simply rocked up and dedicated his very own track, “Michelle”, to the First Lady herself. After serenading Mrs Obama with the lyrics, “I love you, I love you, I love you,” McCartney joked that he could be the “first guy ever to be punched out by a president.” (if that had been the case, he surely would have screamed “Help!” See what I mean when it comes to the puns?)

McCartney was no slouch with his own zingers either, unable to resist the following funny: “After the last eight years, it’s great to have a president who knows what a library is.” (Paul McCartney will be here all week ladies and gentlemen).  Want proof? “I don’t think there could be anything more special than to play here,” he commented, before making the following offer: “Lunchtimes, we could come around … We’re cheap.” Back to the day job and he reeled off a string of classics including “Got To Get You Into My Life, “Eleanor Rigby” and “Let It Be.”

Obama praised the British legend for his contribution to U.S. culture, saying the Beatles had “helped to lay the soundtrack for an entire generation, ” as well as adding, “That’s right, we stole you, Sir Paul.”

If this wasn’t enough, the likes of Stevie Wonder, Elvis Costello, Emmylou Harris, the Jonas Brothers, Jack White, Dave Grohl, Lang Lang and Faith Hill were among the eclectic, star-studded line up with Jerry Seinfeld on hand to add the official comedy (the show will be broadcast as a PBS special on July 28). The night ended with the Obamas up on stage, singing along to “Hey Jude.” The White House has never hosted a cooler evening. See for yourself here.”

The set list for the night was:
Paul McCartney – Got To Get You Into My Life
Elvis Costello – Penny Lane
Dave Grohl – Band On The Run
Corinne Bailey Rae and Herbie Hancock – Blackbird
Emmylou Harris – For No One
Faith Hill – The Long and Winding Road
Jonas Brothers – Drive My Car
Lang Lang – Celebration on the piano
Jack White – Mother Nature’s Son
Stevie Wonder – We Can Work It Out
Paul McCartney – Ebony And Ivory (a duet with Stevie Wonder)
Paul McCartney – Eleanor Rigby
Paul McCartney – Michelle
Paul McCartney – Let It Be
Paul McCartney – Hey Jude
(The concert and award speeches were taped by PBS and will be televised as a 90 minute TV special on July 28th in the US).