What has to be the cutest little Beatles book ever: 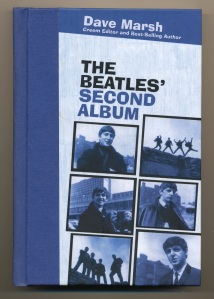 Its the 1964 Capitol Records US LP release “The Beatles Second Album”, and for Dave Marsh and millions of Americans, when it came out (despite its manifold flaws) it was a paradigm shift in music.

I say “despite its many flaws” because Marsh outlines numerous arguments as to  why “The Beatles’ Second Album” was indeed flawed – from the poor sound transfers from the original UK master tapes of individual songs; the way the song running order differs from those being released on the Beatles original albums in Britain; because in it’s 22 minutes so many of the songs are not original compositions but cover versions; right down to the shoddy, slapdash cover art. However, putting all that aside, it’s an album which still had the power to turn a young teenage boy onto rock music – a passion which remains to this day more that 45 years later…

“There’s a story here. I mean to tell it. It has a beginning, a centre, an aftermath….Because of all the contrdictions of its creation, and becasue it unwittingly came closer to describing the shape of the Beatles’ musical roots than anything else they did in the recording studio, “The Beatles’ Second Album” tracks on several other levels. Also because of the response of fans now and the Beatles then to how it and its other bastard American brethren, spawned from greed and greatness in near equal measure, because of what it says about who the Beatles could have been and what they were and who we could have been and what we were, too…..What we were left with pretty much traveled on a single track: the story of the Beatles as a grand triumph of good cheer and fellowship, teen idols turned into heroic artists.”

If you want to see more the front and rear covers, plus the first chapter in full (and half the second chapter), are available online.

While it’s a cute little book, it is an odd one in that it is published by Rodale Books. Rodale, from what I can gather from the web, are the publishers of magazines like “Men’s Health”, “Women’s Health”, and “Runner’s World” etc., as well as a range of health and lifestyle books – so its unusual that they ventured into the world of popular music back in 2007 when they published this one. It definitely sounds like there’s a bit of an intriguing back story about just how it came to be published….