It was released today (Friday, September 2) in Australia:

This is the re-issue, in newly remastered form, of “The Beatles 1” compilation which first came out in the year 2000. As the sticker on the front cover says: “27 Classic Number 1 Singles – Remastered”. Here’s the rear cover: 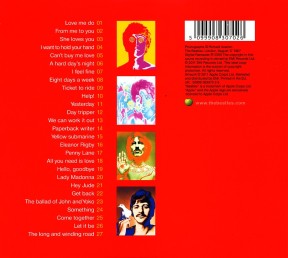 These are the remasters done at the same time as the big release of all the albums back in 2009. It comes in a cardboard gatefold sleeve that’s in the same format as all the 2009 re-issues.

Below is the front cover of the booklet, which despite some speculation that it would be different, has exactly the same 30 pages and layout as the 2000 issue:

Each page is dedicated to a particular song and gives the recording place and date, chart information and full colour photographs of various record sleeves of that single from around the world.  Even the CD printing is the same as the 2000 issue:

The Beatles official site has this promotional video for “1” now on the front page: