Another variation of Paul McCartney’s Russian album Снова в СССР has come into the collection. I found another version on Ebay which I didn’t have. It was listed by an Australian seller (so postage was relatively safe, fast and cheap). It was also at a very reasonable price and so I couldn’t resist: 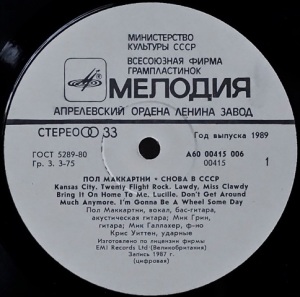 Снова в СССР is Russian for “Back in the USSR” and last time I posted on this was way back in 2010 when I detailed some of the other variations in my collection. I had five different vinyl pressings then, plus the CD edition, but there are actually almost too many variations of this LP to count. This latest one I have comes from the Aprelevka pressing plant which was just on the outskirts of Moscow. It’s the 1989, thirteen track version.

You can see all the many variations of this disc at the amazing The Beatles Get Back in the USSR website. To get to the key Снова в СССР entries go to the site’s pages detailing the original 11 track release; the more common 13 track release (which we have here); and the very rare mis-pressed 12 track release. As well as the many label variations from the different Russian pressing plants you’ll be able to explore the many cover variations in the printing of this album as well.

3 thoughts on “Another Variation of McCartney’s Choba b CCCP”