On the eve of a major new retrospective exhibition of her art, Vogue magazine has published an interesting article about the importance of Yoko Ono as an artist in the 1960’s.

Beginning today at the Museum of Modern Art in New York is an exhibition entitled “Yoko Ono: One Woman Show, 1960-1971″. 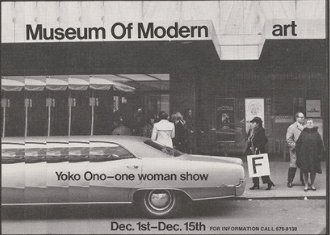 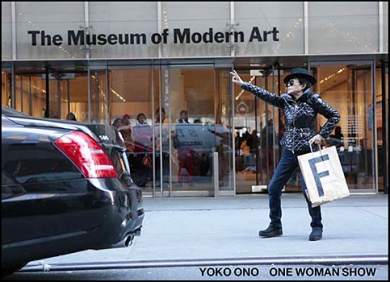 Of course any discussion about Ono inevitably comes around to her relationship with John Lennon and the Beatles. As Vogue says about this exhibition: “….even though John Lennon is visible and mentioned, it is gently done. On these gallery walls, we see him less as a Beatle and more as a fellow artist.”

And: “If you grew up with the Beatles, it can be difficult to like Yoko Ono. People like to accuse her of turning Lennon into a humorless hippie, the two of them tweaked out on too much acid, calling for peace. They like to point out that he stopped making music to be a dad, while Ono pursued her career as an artist. Lennon loved her—their chemistry is unmistakable—but this alone didn’t get his fans to love her, too. We like our idols unattached, even if they’re unavailable.”

You’ll notice that the Illy coffee company is a sponsor of the MOMA exhibition. As part of that Yoko Ono has produced seven, limited edition espresso coffee cups as part of the company’s Art Collection series by famous artists. You can learn more about these here. 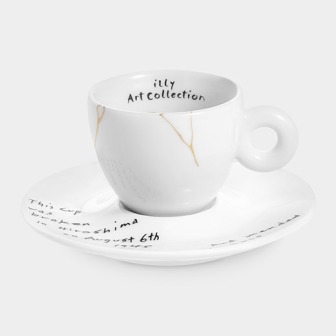