My daughter was at a big market in Melbourne a couple of weeks back. There was a guy selling records and so she bought this for me:

It’s the 12″ single release of John Lennon’s ‘Jealous Guy’, taken from his Imagine album. As far as I can tell the single was released in 1985. Discogs doesn’t have this particular release listed, but it does have entries for the UK and Europe which look to be the same.

This is the Australian release and as you can see it’s backed with ‘Going Down On Love’ (from Walls and Bridges), and ‘Oh Yoko!’ (also from Imagine). 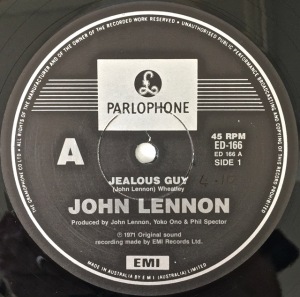 The cover is a bit worn and creased and there’s a slight tear on the back, but the vinyl inside is in absolute mint condition.

It’s nice when your kids buy you presents!