We recently moved offices at work and I needed something to brighten up my new space. So I got onto Ebay and found this Beatles poster, which I’ve had framed. Here’s the Ebay image (its not my office!): 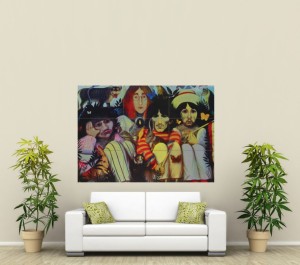 I got it because it’s the painting used on the front cover of “The Beatles Ballads” which, when it was released back in 1980, spent some seven weeks in the number one spot on the Australian charts:

The cover art is by an artist simply known as ‘Patrick’ (you can see his signature at the bottom left in the image above).

‘Patrick’ is actually Scottish artist and playwright John Byrne. His art was popular with the Beatles and in 1968 they commissioned him to create a possible cover for what would become “The Beatles” (also known as “The White Album”). Byrne’s style and concept appears to support the original working title of that album which was “A Doll’s House”. Turns out it wasn’t used then, but the work re-surfaced as the cover for the compilation album “The Beatles Ballads” twelve years later.

John Byrne (b.1940) has had an interesting and varied life. He grew up on a notoriously tough housing estate in Paisley, not far from Glasgow in Scotland. He escaped work in a carpet factory to study at the Glasgow School of Art, and carved out a successful dual career as both an artist and a writer. 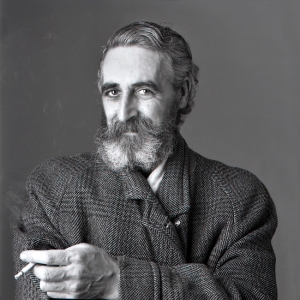 John ‘Patrick’ Byrne’s biography reflects his diverse talents. He’s designed theatre sets and record covers. His play “The Slab Boys” (1978) won him the Evening Standard’s most promising playwright award. The very successful, six-time BAFTA award-winning television series “Tutti Frutti” appeared in 1987. These writing achievements developed alongside his prolific artistic career, which took off in 1967 when Byrne assumed the identity of ‘Patrick’ for a solo show at the Portal Gallery in London. A prolific painter, illustrator and print-maker, Byrne today boasts a range of works held in many prestigious public collections.

His record cover credits include works for Donovan, Gerry Rafferty and Billy Connolly:

Two weeks ago, at the Edinburgh International Book Festival, Beatles fans got to catch up with Byrne who was there to publicise his new illustrated childrens book called “Donald and Benoit: A Story of a Cat and a Boy“. He signed this copy of “The Beatles Ballads” as John ‘Patrick’ Byrne: