This is the next installment of close-up, detailed photos of the current John Lennon re-issue program. We’ve already had a look at the “Signature” box set containing freshly remastered editions of all the original studio albums, plus two CDs of singles, home recordings and outtakes.

Now its the turn of the other box set issued as part of the program called “Gimme Some Truth”. First thing to say is that it is much smaller that the “Signature” box set (although that’s not saying much as the “Signature” set is huge). Its really just a slipcase kind of affair, designed to hold four CDs in cardboard sleeves plus a book. The other thing to say is that there’s nothing new here audio-wise for the avid collector. These are compilations completely made up of previously released tracks – most of which have been re-issued in a variety of forms many, many times… 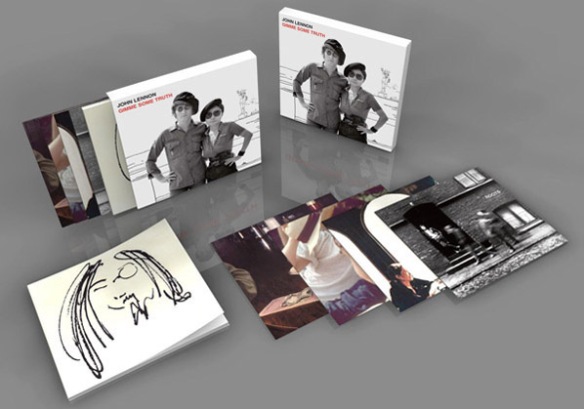 The front and rear photos on the box are of John and Yoko in New York, only they’ve been superimposed on a drawing of New York Harbour (as imagined by John Lennon). It was taken by Scottish photographer Iain Macmillan, best known for his photo for the cover of “Abbey Road”:

Here’s a shot from the same photo session with Iain Macmillan: 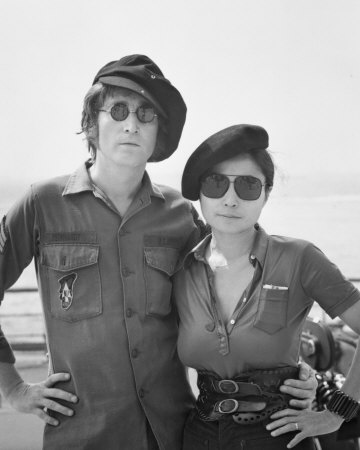 Inside the box are four themed CDs that gather John Lennon’s songs into categories. The first is “Working Class Hero”:

This photo is taken by Bob Gruen, a long-time friend and frequent photographer of Lennon who has taken some of his most iconic shots, including the images for the “Walls and Bridges” album, and he did the photograph used on the recent biography of John by Philip Norman. There are 18 tracks on this CD and they include “Power to the People”, “Steel and Glass” and “Give Peace a Chance”.

The second CD is called “Woman”, and gathers together love songs and songs specifically about the women in Lennon’s life: 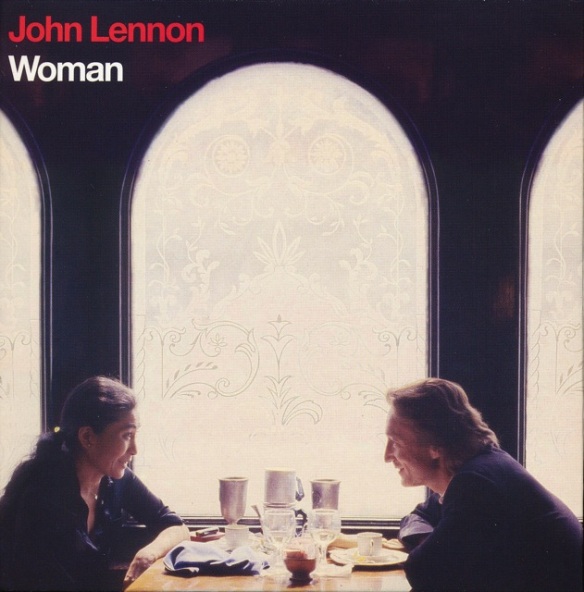 This image is by Lilo Raymond, and is a photograph from the same sessions as the one used for the front cover of the 1983 posthumous LP release called “Heart Play – Unfinished Dialogue” which contained conversations with John and Yoko recorded in 1980:

Got to be one of the saddest photos of John, don’t you think? So much potential there and a baby boy he won’t get the chance to see grow up….. Songs include “Nobody Told Me”, Watching the Wheels”, and of course “Borrowed Time”. The image was taken by Nishi Saimaru, who’s 1990 book “The John Lennon Family Album” features intimate family photographs taken over a three year period with the Lennon’s in New York, Miami, Hong Kong, and Tokyo. She also took the cover photo for that other four CD box set released in 1990, simply called “Lennon“.

The fourth and final disc collects Lennon covering tracks from his youth – early rock’n’roll standards plus a couple of other more contemporary rockers.

This is one of a series of famous images taken by Jurgen Vollmer of a young John Lennon in a Hamburg doorway. Vollmer, Astrid Kirchherr and Klaus Voormann met the Beatles in Germany in the early 60’s. Later, John was to write: “… Vollmer was the first photographer to capture the beauty and the spirit of The Beatles…We tried very hard to find someone with his touch after we returned from Hamburg, Germany…nobody could…The photographs…speak for themselves.” One of his photos from the same session was used on the cover of the 1975 album “Rock ‘N’ Roll”:

The “Gimme Some Truth” box also contains a 24-page book featuring an article (“Truth In All It’s Forms – The Songs of John Lennon”) by Anthony DeCurtis. DeCurtis also wrote the essay for the “Signature” box. It is illustrated with additional photographs, Lennon drawings and hand-written lyrics.

The front and rear covers of the book feature a Lennon drawing with his face morphing into Yoko Ono’s, and vice versa:

The final inclusion in the box is a business card-sized piece of cardboard with the word “Online” on one side and instructions and a PIN code for you to access the John Lennon Universe on the web on the other.

I’m not sure, but I think this card and PIN get you access to less comprehensive content in the “Universe” to that of the “Signature” box one. If anyone confirm that let me know.