Back in November I wrote about the release of a new two CD, 50th Anniversary Edition of “The Beatles (with Tony Sheridan) – First Recordings”.  I’ve finally tracked down a copy for the collection and so can now give you a few more details about its contents and packaging.

“First Recordings” is released by Time-Life/Universal Music Special Markets, and the two CD’s come in a separate gatefold sleeve along with a thick booklet, all contained in a cardboard outer slipcase: 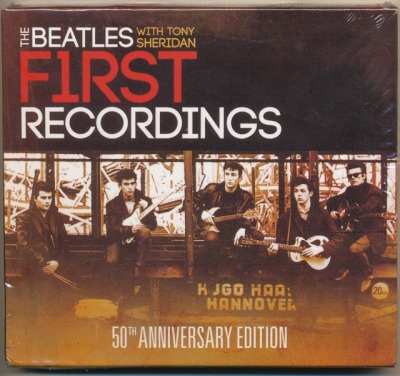 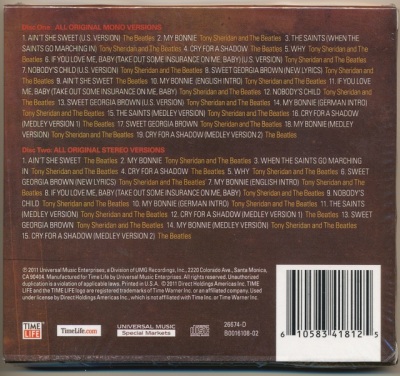 Inside is the gatefold cardboard sleeve which holds the two CDs – the front and rear covers of the sleeve look like this: 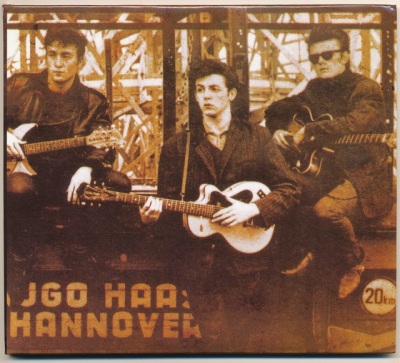 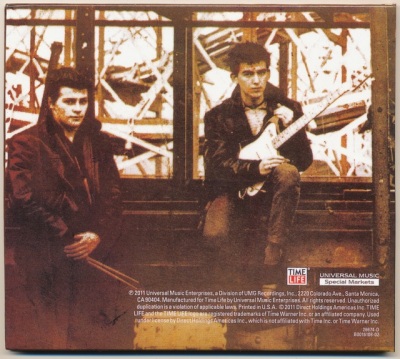 And here are the two CDs: 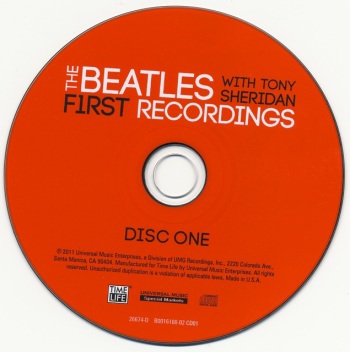 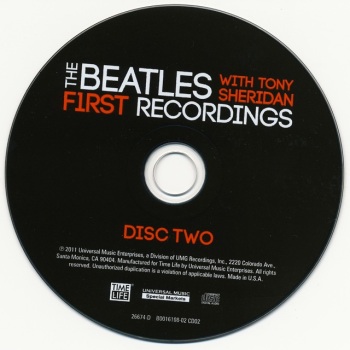 Also included in the package is a very detailed and thick 36 page booklet with a lengthy essay written by Swedish Beatles expert Hans Olof Gottfridsson (edited by respected music writer Colin Escott); lots of black and white and colour photographs; reprints of original recording contracts; details of recording dates; and hand-written biographies by Pete Best, George Harrison, Paul McCartney, and John Lennon (who credits himself in brackets as the band’s “LEADER”).

There are also lots of examples of original record covers and labels from the time. Here is the front and rear covers of the booklet: 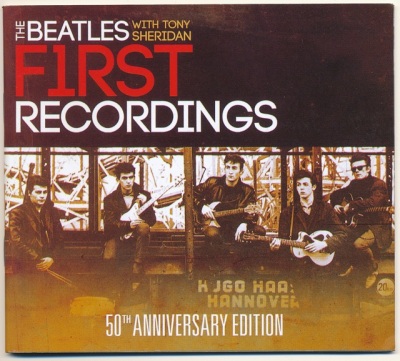 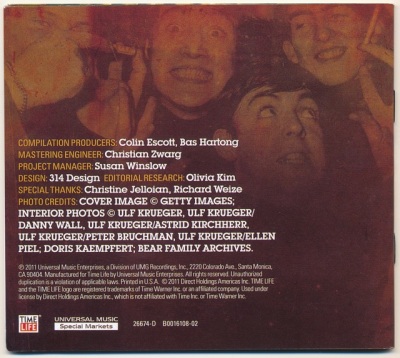 Here are some examples from inside the booklet:

(click on any of these images to see larger versions)

As you can see above there are 35 tracks in all, in both mono and stereo and the disc claims this is to be every version and track of their earliest recordings. Time-Life has a small website with a little bit more detail about the release and there’s some further information about these recordings here. Of course these tracks have been released in many forms many time (both officially and unofficially) over the years. This set gathers them together in the one place – very much like the two CD box set released in 2002 for the 40th anniversary by Bear Records called “The Beatles with Tony Sheridan: Beatles Bop – Hamburg Days” in which Hans Olof Gottfridsson was also involved:

Writing a review on the Amazon site, kennedy19 summed it up this way (and the same can be said for this Time-Life 50th anniversary edition: “….the 1961-62 recordings of the Beatles (with Pete Best, not yet Ringo) in recording studios in Germany as a backup band for Liverpool singer Tony Sheridan. The Beatles themselves had nothing to do with this reissue, but Beatlemaniacs will be impressed with the thoroughness with which this collection was made….The recordings themselves are contained on 2 CDs, and it should be noted that there are really only about 10 songs here, but that this set excels in tracking down every available mix of each one that was ever released (the original tapes no longer exist), both in mono and stereo. Beatles fans may be disappointed that Sheridan (impersonating Elvis pretty well) sang most of the lead vocals on these recordings, although John Lennon does get to sing a version of “Ain’t She Sweet,” and the Beatles did get to record their own catchy instrumental composition, “Cry for a Shadow.” Other songs include “When the Saints Go Marching In” and the famous “My Bonnie” which brought the band to Brian Epstein’s attention. It is interesting to hear the Beatles playing their recognizable sound here, with the energy and versatility that would amaze the world in a few short years. This is also a rare chance to assess the drumming of Pete Best. Casual fans will think this set, with its multiple versions of the same songs, and its painstaking documentation of each one, to be too much ado about too little. But scholars and rabid fans interested in the early years of the group will definitely want to add this to their collection. And yes, the sound quality is very good.” 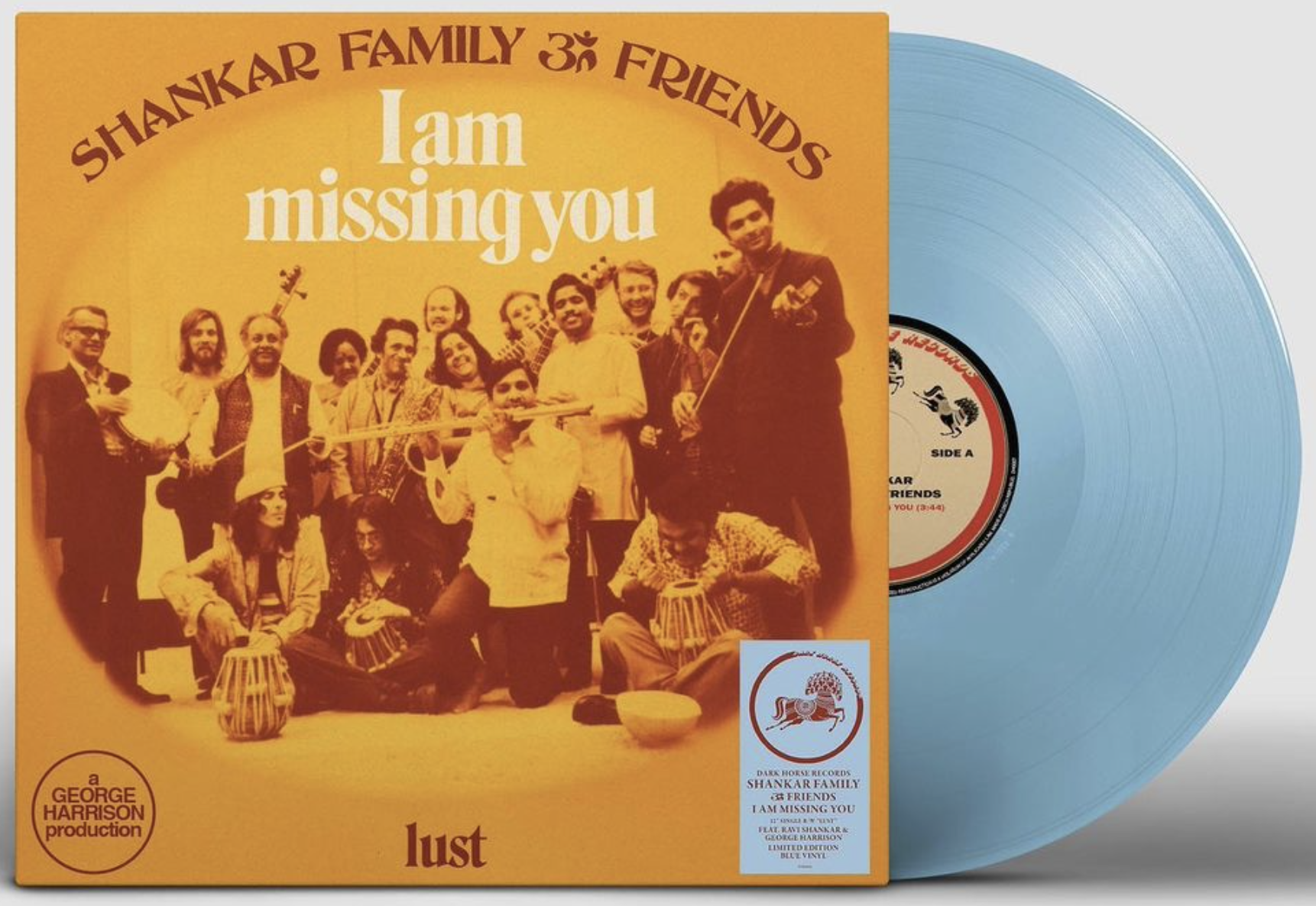