It was in a suburb about a 25 minute drive away – way outside my usual garage sale territory, and one I had to think twice about…..But I finally decided that, yes, it sounded like too good an opportunity for the collector in me to pass up. It was those words: “Vinyl – 1000’s rare & collectable”. That did it…..

When I finally got there (a bit later than is wise with these things) the sale was literally in an old, free-standing garage at a private house on a quiet street. There were already two or three guys there picking over literally shelves and shelves of vinyl – stacked floor to ceiling around the walls of the garage, and also in the centre of the floor space as well. The guy holding the sale was definitely in the business and looked like a) a real collector and b) like he owned (or used to own) a second-hand record store and this was both his excess stock and some of his private collection combined.

The question in situations like this is “Where to start?” The feeling of anticipation mixed with the sheer volume of LP’s to look through can be daunting. I asked the owner if there was any order to the way the albums were arranged. He said no, its all pretty random, which just added to the anxiety. No sections like “Female vocal” or “Popular”, “Classical”, “Jazz” and the like. So I just delved in. First shelves were classical – so I kind of bypassed that pretty quickly. There was actually very little popular music. Mostly Broadway shows, film soundtracks, and a lot of 50’s singers as far as I could see, with some decent jazz, blues and a little bit of pop scattered throughout. Kind of disappointing really.

The only Beatles-related item I could find in the 45 minutes I was there was this:

This is the rear cover: 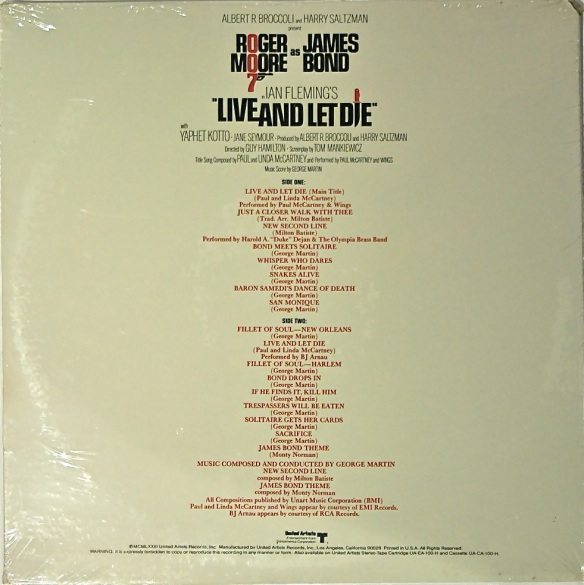 He had LOTS of copies of this – probably 20 or 30 – and they were all US pressings on the United Artists label, all original and all still sealed. They were “cut-outs” or remaindered stock, each having a corner cut off by a machine at the warehouse to designate their clearance status. The one I grabbed had only a tiny cut-out on the top left-hand side (which you can see in the photos). This is a gate-fold cover, but as it is still sealed in its original shrink wrap from 1973, I’m probably going to keep it that way and not open it.

I already had an Australian pressing of “Live and Let Die”. It’s not a gate-fold, and as you can see from the images below, it has a slightly different front cover: 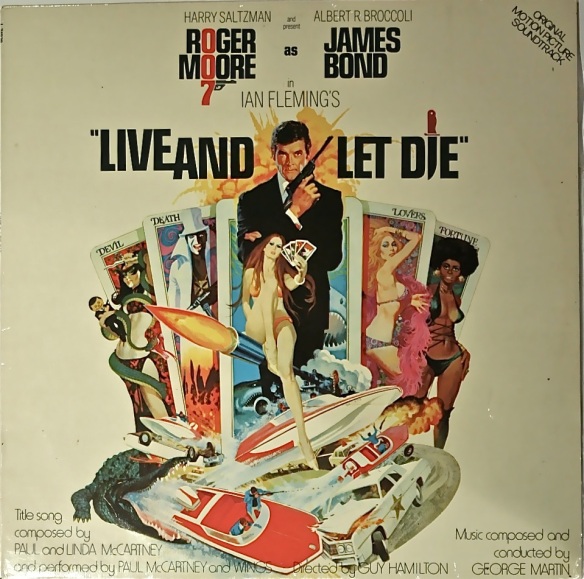 And a very different rear cover:

﻿And here’s the label for the Australian pressing:

Trust me. That stamp on the label stating “Property of A.B.C. (the Australian Broadcasting Corporation)” is genuine. And I genuinely purchased this record from a second-hand store. I know the ABC sold off a lot of surplus LP’s a few years ago and I’m assuming that this is one of those legitimate items.

McCartney and Wings also released a single from the album. I have two copies of this (both Australian pressings) – one on the green Apple label:

And one on the red Capital label: 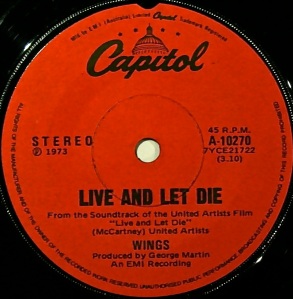