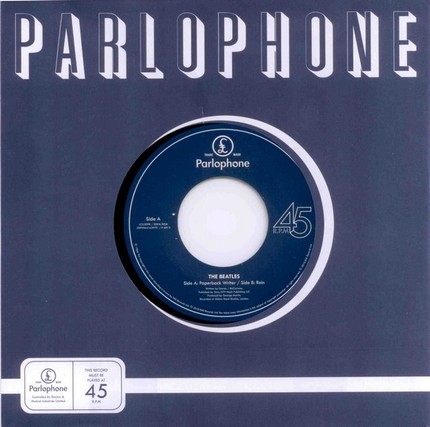 I’ve been sweating on the postman arriving this week as I bought a copy of the “Paperback Writer/Rain” Parlophone Record Store Day re-issue, and it arrived today. Mine came from the US. It was finally released there on June 8 after an on-again/off again series of dates came and went. This followed the initial UK release on Record Store Day proper earlier this year on April 17.

In the UK the re-issue was limited to just 1000 copies – and hence the prices being asked went through the roof. I believe (see below) that the US releases are imports of the exact same UK pressings – and so are a chance to catch up on that really rare initial UK release.

You can see five close-up images here – three of the most recent “Paperback Writer/Rain” US release, and two of a previous US Capitol issue.

I’ve just received a copy of the new “Paperback Writer”/”Rain” 7″ vinyl single from Capitol, which will be issued to participating indie record stores as part of continued celebration of Record Store Day. The disc & sleeve are actually the same as was released in England. This is an import of that release (i.e. not pressed here in the States by Capitol). The record features a black-and-white Parlophone die-cut sleeve with dark blue label backdrops. The A-side label lists both songs; the B-side label features art that matches that on the back of the sleeve – letters spelling out “Parlophone.” For those who keep track, the disc is Parlophone R-6813/EMI 50999-6-41639-7-0. The disc itself features stereo mixes of the two songs. It’s important to note – this is the first vinyl release taken from the new masters, and they sound fantastic. The stereo spread sounds as if the mastering engineer pulled in the left and right a hair (i.e. so that the hard-left and hard-right panning of some channels isn’t quite as far left or right). And, of course, being mastered at Abbey Road, my needle didn’t jump out of the groove on “Paperback Writer”.

After reading all this I got a bit inquisitive and wanted to find out if the Beatles Parlophone re-issue was a one-off, or part of a bigger re-issue by the company around Record Store Day. Turns out “Paperback Writer” was just one of many re-issues by the label – all done with similar dark blue sleeves and labels. Here is the official Parlophone press release

Parlophone have announced plans to release a series of limited vinyl (1000 copies each) for Record Store Day (17th April).

Babyshambles Side of the Road/UnBiloTitled

Chiddy Bang Opposite of Adults/Sooner or Later

Lily Allen Back To The Start/Kabul Shit

(plus one other release)

Miles Leonard, President of Parlophone said: “Parlophone and our artists recognise the importance of our Indie stores and their contribution to not only our new and developing artists but to our catalogue as a whole. Being able to support this campaign with some great 7″ releases from The Beatles to Bat For Lashes is our way of thanking them for their continued support. After all ‘Music Matters’.”

Of course Capitol in the US also released The John Lennon Singles Bag as part of the celebrations for Record Store Day as well, and you can read more about that here.