This isn’t new – it comes from back in December last year but I’ve only just discovered it and thought its worth passing on because it’s kind of interesting.

Its an interview on the Australian EMI site with Richard Lush – who worked at EMI during the 60’s as second engineer to Geoff Emerick recording the Beatles. As he says in a great quote from the article:”….I did 105 sessions; 105 days I walked across Abbey Road and went to work for the Beatles….”.  Not many people can make that claim.

“I was 18 years old and I had been there for 6 months. Before I started on “Revolver”, when we did “A Day in the Life”… Geoff and I, Geoff was 2 years older then me… Geoff would have been 20 and I was 18. I remember us in the control room joking to one another… isn’t amazing…they are actually trusting us… (We laughed)” 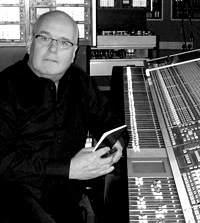 “People often ask me: “What’s the worst thing about working for the Beatles?” And I always said… The fact that they would always start late. Most bands in those days started in the morning (10am) but they would start around 2pm. So you would show up just before 2… There would be no fans, no screaming girls, so you knew they had not arrived yet. Then George Martin would show up about 4 o’clock, we would set up, still be waiting, and then the Beatles would roll in about 7 or 8pm and go to about 8 in the morning……I worked on “Pepper”, did a track on “Revolver”, about half   “The White Album”, some of “Magical Mystery Tour”.”

Anyway, check out the interview in full – its worth a read.

If you want to see Richard Lush in the studio here’s a short clip of him examining the piano and drum parts for the John Lennon track “God”, from his solo album Plastic Ono Band. This was part of the great “Classic Albums” video series: