Got this one second-hand on Ebay – and it looks like a really good read.

Ken Mansfield was a Capitol Records executive and an insider in the Beatles camp. He had a unique insight into the way the band worked, the absolute power they wielded in the music business, and the causes behind their ultimate demise. His book is called “The White Book”, and it carries the subtitle “The Beatles, the Bands, the Biz: an Insider’s Look at an Era”.

Each book, like the album after which it is named, is plain white all over, comes with the title embossed on the front cover, and has a limited edition number stamped on the lower right-hand side. Mine is 028525. 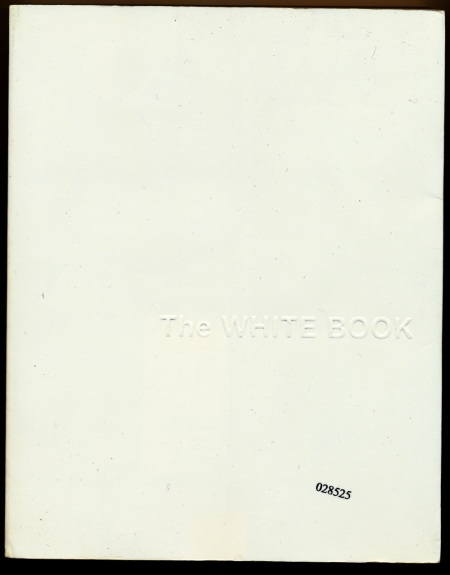 I really like the layout, look and feel of this book. Its a mid-sized softback, 248 pages with what they call in the book industry French flaps (don’t ask me why they are called that…the paperback front cover and rear extend and fold in – if that makes sense. Small but boring detail?). It has a large selection of photographs which are a combination of black and white, colour and colour-tinted photographs, many of them originals from Mansfields personal collection and as such never seen before. If you want a sneak peak at “The White Album” Google Books has a large selection you can see, along with extensive text extracts. Amazon also has a “Look Inside” preview.

Those links give you a really good idea about the design of “The White Book” and how it’s laid out. If you’ve scrolled through the Google Books/Amazon links you’ll appreciate there are lots of photos of items that illustrate key moments: telegrams, record covers, photographs, and hand-written notes from the Beatles to Ken Mansfield. One of my favourites: an autographed copy of the White Album given to him by George Harrison: 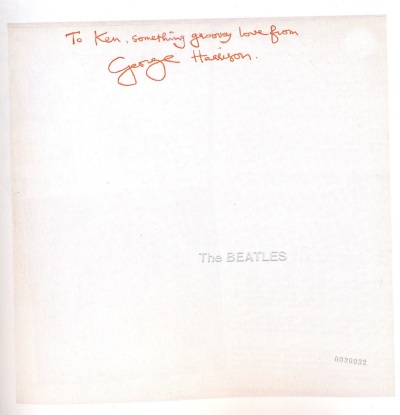 To sum up the contents of the book, this extract from Publishers Weekly is revealing:  “The second memoir from record-industry vet Mansfield (The Beatles, the Bible and Bodega Bay), a simple look at a complex happening, recounts his overwhelmingly positive experiences working with the Fab Four (and others) as they put together their late-career masterpiece The White Album. Mansfield relates how a lucky break in the 1960s took him from promotions executive for Hollywood’s Capitol Records to U.S. manager of Beatles-owned Apple Records. One of the few Americans allowed into the group’s inner circle, Mansfield presents revealing one-on-one time with each band member, yielding insight beyond their public personas. He notes, for instance, that mere words can’t explain how intimidating John Lennon and Yoko Ono were. Though he provides his side of artistic debates (should “Hey Jude” or “Revolution” be the first Apple single?), and eyewitness accounts of key Beatles moments (including the group’s final public performance atop the label’s London headquarters), Mansfield misses numerous opportunities to provide insider details and to comment on the progress (or lack thereof) in the recording industry; further, Mansfield’s awkward writing style—clumsy metaphors and alliteration, short chapters and confusing chronology—gives the work an amateurish feel. As Mansfield notes in the foreword, this book is something to enjoy because of its simplicity: engaging but hardly essential reading for the casual fan.”

That last bit is probably harsh. As a real fan this looks to me like it contains a treasure trove of stuff I don’t know, told from a unique perspective. “The White Book” has its own website fabwhitebook.com with lots more information and of course – a video:

1 thought on “The White Book”