Just back from a holiday in Europe where we picked up some Beatle treasure along the way. This is the next instalment about what we found…

Once we’d left Amsterdam it was off to France, specifically the beautiful Loire Valley and the city of Tours, about 240kms from Paris. It wasn’t until we were in a newsagent store there that we saw this, up on a shelf behind the counter: 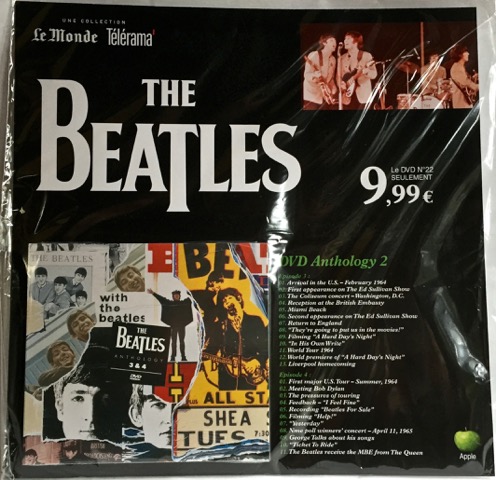 It’s part of a series produced by Universal Music in conjunction with the French newspaper Le Monde and their weekly art, TV and culture magazine Télérama. Starting back in January, each week they’ve slowly been releasing a collection of 25 Beatle albums and DVDs. As you can see these are individual CDs (or DVDs), each in a cardboard gatefold CD/DVD cover. This is attached for display purposes to a larger black cardboard square (11 inches by 11 inches). Each backing square has unique artwork and everything is sealed in a clear cellophane outer.

The weekly sequence for each release is detailed on the rear of the black cardboard square. It began with Sgt Pepper, and ends with The Beatles Anthology 5 DVD :

These CD and DVDs are only available from newsstands and places where Le Monde and Télérama are sold [see Wog Blog’s article about these releases here]. Similar re-issues have also been done in Italy and Spain, however these are not exactly the same CDs and DVDs as those for France.

Until we saw the Beatles Anthology 2 DVD in its special cardboard sleeve we’d completely forgotten about this series. It reminded us that, while all of the main albums had come out in cardboard gatefold sleeves before, there were some very unique packaging elements associated with nine of the 25 French releases: these are the five Anthology DVDs, plus four of the other CDs (Love [single CD]; Anthology 1; Anthology 2 and Anthology 3 [all double CDs]). Each of these have never previously been released in this form with a cardboard gate-fold slipcase. And so these were the ones we wanted to add to our collection. They’re unavailable everywhere else, and purchasing them from French newsagents is the only way to get them.

This wasn’t quite as easy as it might seem. Once each weekly issue is sold out the newsagents no longer stock them – and some of the items we were looking for dated back over seven weeks. While we were in Tours the then-current issue was The Beatles Anthology 2 DVD, so that was easy to pick up. As was The Beatles Anthology 1 DVD, which most newsagents seemed to still have supplies of:

We then needed to travel by train from Tours to the city of Amiens in the north, and while transferring through the huge Gare du Nord railway station in Paris to get there we found copies of The Beatles Anthology 2 Double CD and the Anthology 3 Double CD sets: 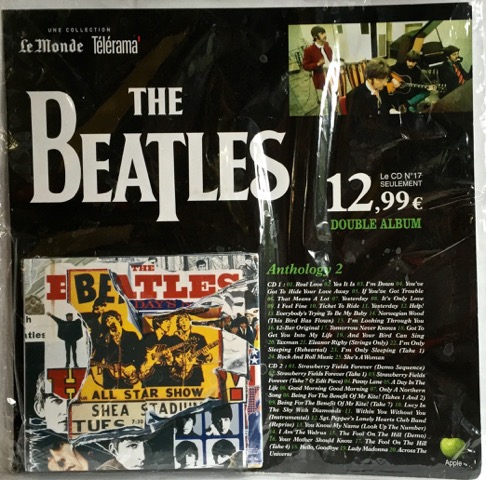 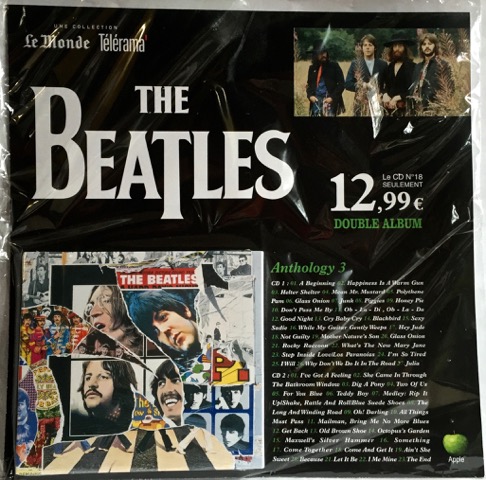 Arriving in Amiens we couldn’t find any other back-dated releases. But while there the latest release (The Beatles Anthology 3 DVD) actually came out – so we quickly grabbed a copy of that:

This left just the double CD Anthology 1 and the Love CD to track down. Our time back in Paris before heading out of the country and home was our last chance….and these final two proved very difficult to find. Lots of asking around turned nothing up at all, though the owners who operate the many little newsagency kiosks on the streets of Paris were really very helpful to us. These kiosks look like this and are dotted around all over the place:

Many of the proprietors really wanted to assist. When they didn’t have what we were after some gave us phone numbers to call (for Le Monde and Télérama), and one guy went above and beyond, using his mobile phone to call around to his mates in other kiosks to see if they had either the Anthology 1 CD or Love. He managed to track down a copy of Anthology 1 for us, and he said possibly the Love CD too. Could we come back the next day to pick these up? Of course we could! There’s nothing like having local knowledge on your side. When we got back next day it turned out he secured just this one for us, which was great:

And while he hadn’t been able to locate a copy of Love for us this helpful kiosk owner had managed to scrounge a copy of Sgt Pepper, the very first CD released in the series.

Because it was the first Pepper was displayed slightly differently. It came out attached to a much wider cardboard backing sheet which is 10 inches by 15.5 inches. So, because he’d been so very helpful (and because of the different appearance of this one), we decided to buy Pepper from him as well:

Love was actually the oldest one we were after. It’d been released to newsagents back in April and as it was now almost July it seemed absolutely no-one had it.

Where we were staying was quite near the very large Gare Montparnasse railway station. Inside (and around it on the street) were multiple kiosks and small shops selling newspapers. So one afternoon, the day before our final departure for Australia, we hit this area pretty hard. For some time we went from place to place with no luck, getting very footsore and tired.

We’d pretty much given up all hope when we tried the very last kiosk we could find….and there we found it, hanging on a hook in the kiosk. It was a little beaten up (you can still see the hook hole) – but it was a copy of the single CD Love album in its unique French cardboard gatefold slipcase: 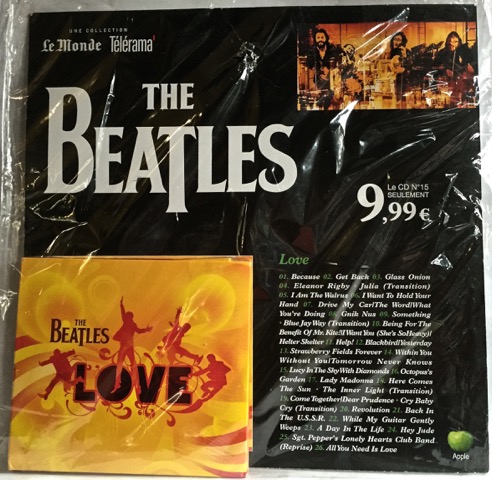 All these French reissues are in fact unique. They have different catalogue numbers and copyright details on the rear covers, and on their printed labels. For example, here’s the Anthology 1 CD. You can see reference to the Beatles Calderstone Productions Ltd., and even the fact that they are to be sold exclusively at newsagent kiosks:

Here’s a close-up of the small print (click on image for a larger version): 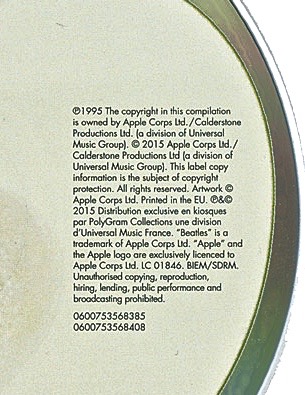 Of course, now we are back home that still leaves us with the quandary of how to source copies of The Beatles Anthology DVDs 4 and 5. These were released after we’d left the country…..so if anyone has any ideas on how we can get those two please drop us a line and let us know!