“I love that he’s pushing the boundaries in his songwriting harmonically and   lyrically. … I would see him bringing in new chord progressions that I still haven’t heard.”

So says producer extraordinaire, Greg Kurstin, who worked with Paul McCartney for over two years on Egypt Station, the maestro’s new album due out in September.

Kurstin has opened up at length in Rolling Stone for an interesting interview with Andy Greene about the new record, and just what it’s like to work with one of the icons of the music industry. The question everyone wonders about did come up: what’s it like telling a Beatle how to improve a song?

It is strange, but I know that’s what he really wants from me. I just have to take a breath and say it. Sometimes it might not go over very well, but he was always really cool. I remember a couple of times where I might have suggested something that might have been challenging. I can’t remember specifically, but I remember him just sort of carrying on and I’m wondering, “Did he hear me?” Then maybe half an hour would go by and I’d say, “Hey, Paul, what about that idea I mentioned a little while ago?” He said, “Oh, I heard you. I was just pretending to ignore you.” If he challenged me and wasn’t into the idea, I would realize, you know, that this is coming from a Beatle. He’s tried everything at this point. He’s done experimental albums. He’s done pop albums. Anything I could possibly ever want to do in the studio, he’s been there and tried it.

We also get to learn more about the contents and making of Egypt Station, a record that despite two songs being released as “singles” there’s been precious little detail about so far. Just one example:

I see that the album begins with “Station I” and ends with “Station II.” What can you tell me about those tracks?
That started with a choir piece that Paul had worked out on the keyboard. Then we brought in David Campbell to help arrange the choir. We went into a cathedral to record that, which was really cool. It started with us in the studio. Paul had worked out some chords that he wanted the voices to do. Then we started creating different ambient noises, some of which came from tape loops. He had a little portable reel-to-reel player, the one they used on Revolver for “Tomorrow Never Knows.” That was done on this little Brenell tape machine. We created some of the sounds on that, like slowing down guitars.

Great stuff that really makes you want to hear this album…..

There’s also picture by MJ Kim (courtesy of McCartney’s MPL Communications Ltd) showing the pair in the studio. The interesting thing is the copyright date – 2016: 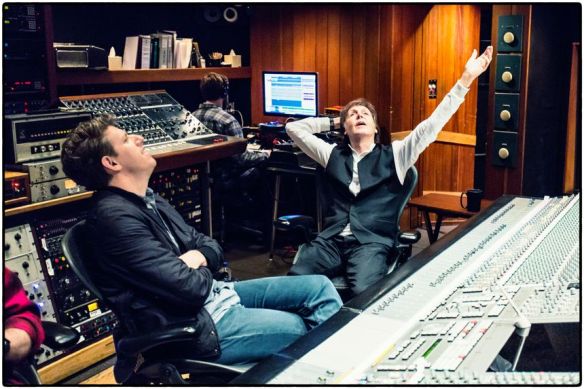