We posted recently about a unique stage show currently running in New York City on the life and times of John Lennon called Lennon: Through a Glass Onion.

We want to let you know about a special, limited time offer for the readers of beatlesblogger which is currently running for the show.

Using code GO39, tickets for Lennon: Through a Glass Onion are available for only $39. This special price applies to any seat in the theatre. The offer is available for the Monday, October 27 performance only. The performance is at 8pm at the Union Square Theatre.

To order your tickets go to http://lennononstage.com/ and use the special code.
(Limit is six tickets per order. Cannot be combined with any other offers. Price includes $1 facility fee. Phone and internet sales are subject to applicable fees. No refunds or exchanges – all sales are final).

This is a great show, getting excellent reviews. The New York Times says: “Beatle fanatics sure to see this show will want to savor every minute”.

We here at beatlesblogger have just discovered that a fantastic Australian theatrical production about the life and times of John Lennon has just hit New York. 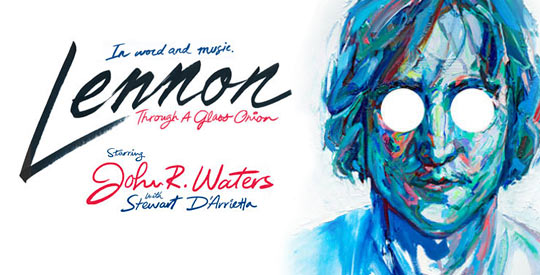 John Waters is one of Australia’s most respected and talented actors. He and his musical director Stewart D’Arrietta have been performing and perfecting their stage presentation about John Lennon since the early 1990’s. Over that time it has been rested, revived and revised many times – and at each new outing the show has always been met with great critical and audience acclaim here. Waters and D’Arrietta have been on the road throughout 2014, playing Lennon in cities and towns across Australia – so it’s great to see that the pair have now made it to the Big Apple after all these years. Tickets are reportedly selling well, and the show is getting some good media coverage in the city.

In Australia the show is known as Looking Through a Glass Onion – John Lennon in Word and Music, so it’s interesting to note the slight name change for the US premiere and also that John Waters is billed as John R. Waters for American audiences. We guess that’s so he’s not confused with the well-known US writer and film director of the same name.

Lennon: Through a Glass Onion is playing now at the Union Square Theatre in New York. It has a good run with performances booked through to February next year.

For a taste of how Glass Onion works on stage have a look at this YouTube video from 2010:

There’s a dedicated website for the New York Union Square Theatre shows with more details on the production, and there’s also a Facebook presence.

And in news just in: In celebration of John Lennon’s 74th birthday, Lennon: Through a Glass Onion hosted an audience sing along after the show with “Give Peace A Chance”: