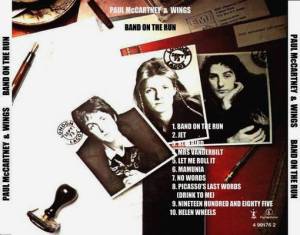 I got an email today from paulmccartney.com confirming the info in my previous post that the “Band on the Run” remastered release will definitely come out on November 1 in the UK and November 2 in the US.

The website’s News section has all the info – it pretty much says what we already knew about the different formats that will be available (1 CD; 2 CD + DVD; 3 CD + DVD deluxe; and vinyl 2 LP), but goes into more detail about the deluxe version – which comes with a lavish book:

Collectors will be especially thrilled by the 4 disc (3CD, 1 DVD) deluxe edition which adds an extraordinary 120-page hard bound book containing many unseen and unpublished photos by Linda McCartney and Clive Arrowsmith, album and single artwork, downloadable hi-res audio versions of the remastered album and bonus audio tracks, a full history of the album complete with a new interview with Paul and expanded track by track information for all four discs. The deluxe edition also includes a special Band on the Run audio documentary (originally produced for the 25th Anniversary edition.)

The email sent to me also has a link to download an HD version of the one of the videos that will be on the DVD disc that comes with the Special and Deluxe editions. Its a big file but if you’d like to see it click on the image below:

Its a short little film with a very home-made feel – but worth it for the soundtrack which is a trance-like version of “Band on the Run” from Paul that I’d not heard before….

2 thoughts on “Band On The Run – Dates Confirmed + Free Download”