Our competition to win a DVD copy of “Produced by George Martin” in the previous post asked the question:

George Martin was never just about one band. There was also comedy, and in 1965  he produced and arranged and conducted the accompaniment for a mock, spoken version of the Beatles “A Hard Day’s Night”.  Who was the performer?

The correct answer was Peter Sellers, the famous British comedian and actor who in 1965  released a single which was a comedy version of the Beatles “A Hard Day’s Night”. In it Sellers recites the lyrics to the song in the style of Laurence Olivier in Shakespeare’s “Richard III”.  The Sellers version became a UK Top 20 hit:

There were lots of entries and the first person through with the correct answer  was Eric Leon in France. Congratulations to Eric (who is a huge Beatles fan), and thank you to everyone who entered the competition.

And a very big thank you to Eagle Rock Entertainment for providing the prize. 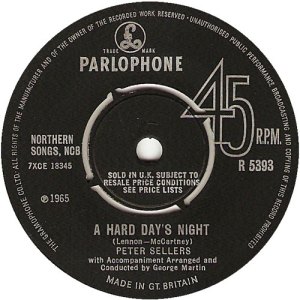 2 thoughts on ““Produced by George Martin” – We Have a Winner”