These days a lot of Paul McCartney’s and the Beatles vinyl LP’s and CD’s have the term “Manufactured in the EU” or “Printed in the EU” on the back cover – even some that are for sale in the US. Here are just a couple of recent vinyl examples from my collection:

And titles in the McCartney Archive series including: 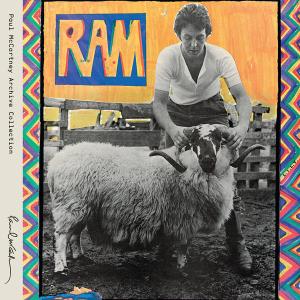 There are CD examples as well (though some of these do say “Manufactured in the USA”).This means these albums are being pressed (and probably in quite large quantities) somewhere in a European Union country. Many might think that means Britain, Germany, Holland, or maybe even France where they have a rich tradition of pressing good quality vinyl and are geared up to do so.

But then again, maybe not….

I’ve had an email from Russian Beatles collector Andrey. Remember back to Record Store Day earlier this year when Paul McCartney, as part of the publicity in the lead-up to the “Ram” Archives Series reissues, released a limited-edition 45 vinyl single of the song “Another Day“?

This was a collectors item reproduction single (including a nice picture sleeve) especially made for Record Store Day. “Another Day” was a song which was recorded during the “Ram” sessions. However it didn’t come out on the original “Ram” album . It was only ever issued as a single and was a huge worldwide hit.  The RSD release from earlier this year looks like this:

Well, Andrey bought that 2012 RSD “Another Day” single from a Russian internet shop.  The interesting thing is that while the small print on the rear of the paper sleeve states (as it does around the world) that the paper sleeve was “Printed in the USA”, one of the two stickers on the back of Andrey’s copy says that the vinyl record itself was actually manufactured in the Czech Republic by a company called GZ Digital Media.

The rear cover of Andrey’s copy looks like this:

And here’s a close up of that sticker:

If you go to the GZ Digital Media website you’ll discover that they’re a well-established and very professional outfit clearly geared up to do high-quality vinyl and CD pressing runs in large numbers if need be. The company’s vinyl “Products” page lists everything from mastering through to the production of 7″, 10″ and 12″ vinyl; shaped and coloured vinyl; and they even do the printing of covers and production of box sets if required.

That got me thinking about some other releases I have with “Printed in the EU” on the back.  The Beatles vinyl editions of “1” and “Love” for instance:

Is GZ Digital Media in the Czech Republic the plant where these were manufactured too?  Could be.

One of the articles I read about the forthcoming box set of re-mastered Beatles vinyl stated that one of the big logistical challenges Apple faced in planning the project was to find processing plant (or plants) that could physically cope with the sheer volume of discs needing to be pressed. They all have to be high quality and stockpiled in very big numbers for distribution. Perhaps the GZ  Digital Media plant is playing a part? 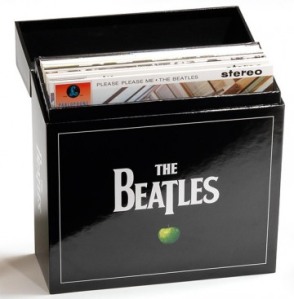 If you have any more info please join in the conversation.