Since we published information on the Limited Edition version of Paul McCartney’s Wingspan – Hits and History CD collection last week, our friend Andrey in Russia has provided information about three more unusual and collectable versions.

The first is this Ukrainian release. Here’s the rear cover: 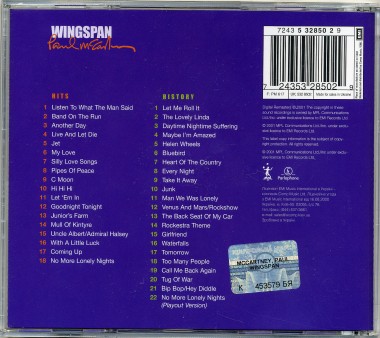 (click on any of the images to see larger versions)

And here are the two Ukrainian discs: 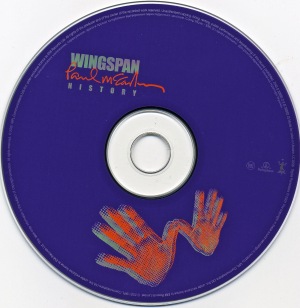 Andrey also provided information on not one, but two very collectable Japanese variants:

As you can see from the shots of the spines below these carry the same Japanese catalogue number and barcode:

And both come with an additional booklet (written in Japanese and English). However, in one version this booklet is incorporated inside the slipcase (its white spine can be seen below), while the other version has the added booklet outside the slipcase (orange spine in the image below):

(click on any of the images to see larger versions)

The other main differences between these two releases are detailed further here (and in all pictures Version 1 is above, and Version 2 is below):

Another thing to note is that in Japan Wingspan – Hits and History contains an additional track to the rest of the world. It’s the song ‘Eat At Home’ and this can be found as track 19 on CD 1. (EU and US versions only have 18 songs on this disc).