Looking at the recently released Capitol Records coloured (and black) vinyl reissue of the Paul McCartney Pipes of Peace LP, we got thinking about the labels used for the original release back in 1983.

This is the label style used on both sides of the 2017 version: 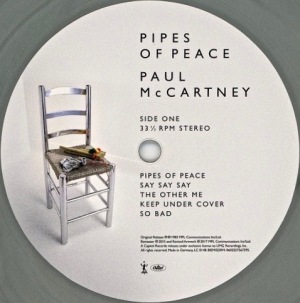 As you can see, the custom designed labels are similar thematically (but not exactly the same) as those used for Side 2 of the 1983 vinyl release: 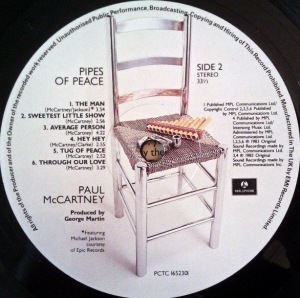 The chrome-plated chair image is larger and positioned differently, plus it has a different musical instrument on it.

For some reason Side 1 in each of the major markets around the world featured vintage depictions of either Parlophone or Odeon record labels (for those territories outside the US), or Columbia Records for the United States (because that was the label McCartney was signed to there at the time).

Here, for example, is the Side 1 label used in the UK – a vintage Parlophone in deep maroon: 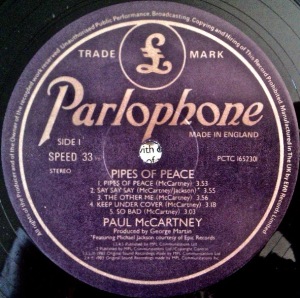 And here’s the label used in the US, which was done in the style of an old-fashioned Columbia release: 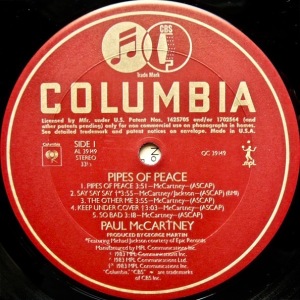 In Australia it was a vintage Parlophone – done in a dark brown and gold: 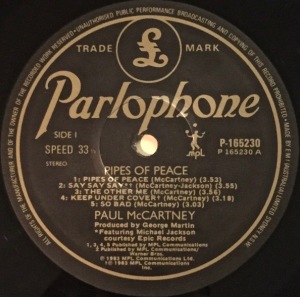 For Europe, where the Odeon label was used to release EMI titles, they used a vintage version too. Here’s the one for Germany:

And Spain of course: 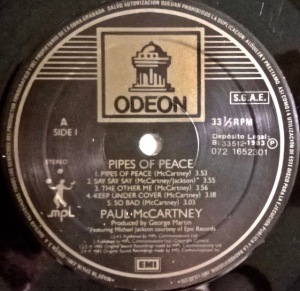 And here’s the label used in France for Side 1. Unusually, it’s a vintage Parlophone – which is strange because you’d think it would more likely be on Odeon too: 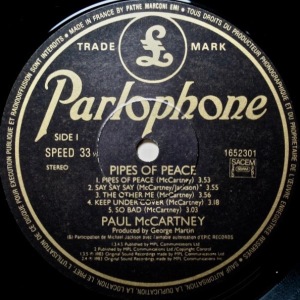 It was definitely vintage Odeon for Japan:

And in New Zealand it was a Parlophone: 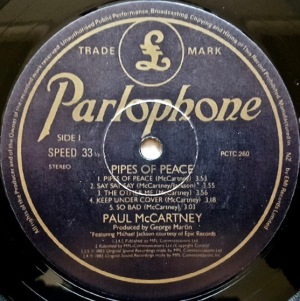 These next few are from smaller territories where we’re pretty sure that on both sides of the disc the  labels used were both the same. If you happen to have any further info on these please get in touch using the “Leave a Reply” section below. First up, India: 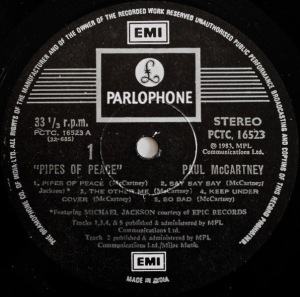 We can confirm that The Philippines definitely used a vintage black and yellow Parlophone for both sides of the disc:

And to some South American countries now – Argentina:

And lastly, Columbia, which interestingly seems to be serviced by both Parlophone and Columbia/CBS records:

If you’d like to see these labels in more detail, click on the images to bring up larger versions.

And if anyone knows just why Paul McCartney wanted to use vintage labels for Side 1 only of Pipes of Peace, please let us know by commenting below.