Like a lot of collectors around the world, we have been waiting patiently for Universal Music to sort out the delays and confusion around the supply and delivery of the recent Paul McCartney vinyl re-issues on coloured vinyl.

We ordered ours last year, weeks before the advertised shipping date – but it is only in the new year that they have finally arrived, and in two separate shipments. Ram clearly was in very short supply and it is pretty obvious that a pressing of more copies had to be hurriedly arranged. That LP came in a separate package a few following the main batch.

Having said all that, these look absolutely fantastic. Here are some images of the collection – the front “hype” stickers and record labels: 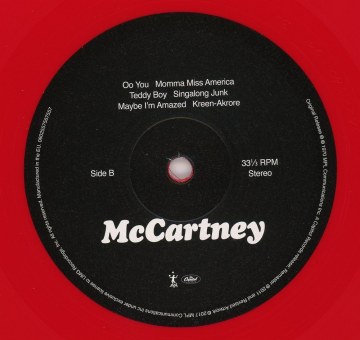 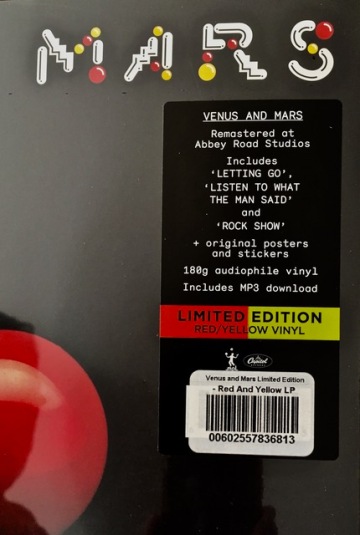 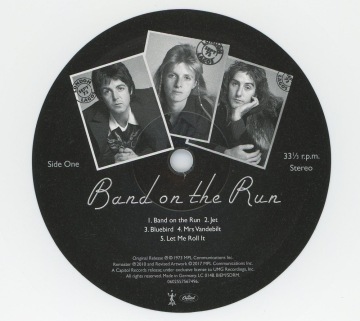 (As usual, click on the images to see larger versions)

Late last year Capitol Records announced an ambitious range of projects to take place across 2017 in celebration of its 75th anniversary producing, releasing and distributing music.

Principle among its plans was to be the release on vinyl of 75 titles from their vast catalogue that best represented the wealth of talent signed to, or associated with Capitol over the last 75 years.

The label convened an advisory board to decide on the final list of albums, and of course amongst them were a number of titles of interest to Beatle and solo-Beatle record collectors and readers of beatlesblogger.com.

Despite the fact that the year is just about done, it seems that there have not been any/many of the five Beatle titles on the list released as yet – at least from what we can tell. Nor has the John Lennon Imagine album, George Harrison’s All Thing Must Pass, or Wings Band on the Run shown up anywhere identified as part of the celebrations.

According to the press release, the US store Crate and Barrel is the main outlet and you can see they initially did have a few titles listed via their online store – some with a “Celebrating 75 Years of Capitol’s Music” logo on their front covers, some without). When we looked there were seventeen titles on their page – still far away from the seventy-five total. Subsequent searches failed to turn up ANY vinyl records or albums – so it looks like Crate and Barrel might have got out of the music business…..

Meanwhile, Amazon in October listed a 2017 re-issue of James Taylor’s eponymous 1968 Apple Records release, James Taylor – and this is one of the titles on the Capitol 75 list too:

The front cover image Amazon shows doesn’t have any “Celebrating 75 Years of Capitol’s Music” logo or sticker, but the rear clearly shows it to be an Apple/Capitol/Universal Music release. Look below the bar code:

Just by the way, according to The Daily Beatle site there is a problem with the pressing of this record. Side Two should have a song called ‘Brighten Your Night With My Day’. It is listed on the label, but is not present when you play the LP! Maybe that’s why when we ordered a copy for our collection, Amazon is saying they cannot give an exact delivery date. Maybe all copies have been withdrawn and corrected pressings are being prepared?

Still over at Amazon, a pre-order listing has appeared for Ringo Starr’s Ringo LP. This album is also on the Capitol 75 list, and the image below seems to have a Capitol 75th Anniversary identifier on the front cover (though we are not sure if this is genuine or has been photoshopped in by someone else):

Amazon says that Ringo will be released on January 19, 2018.

Curiously, Amazon is listing Goodnight Vienna for a January 19 release as well, but this title does not appear on the Capitol 75 list……not sure what is going on there. 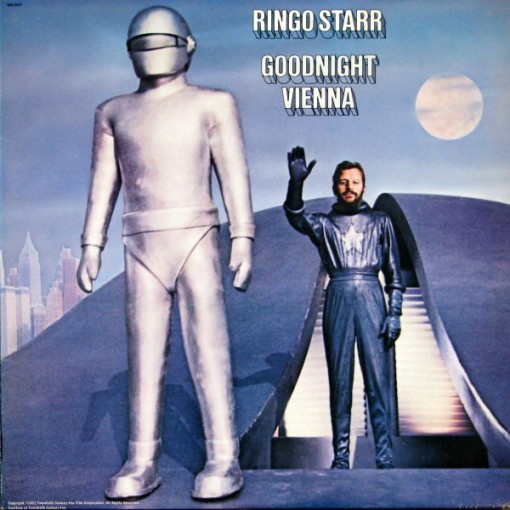 Five days on from the official announcement on the Paul McCartney website that there are to be eight titles in the McCartney Archive Collection series re-issued as single discs on the Capitol label (on CD, black vinyl and limited coloured vinyl), confusion reigns about just how anyone can actually order the coloured vinyl. 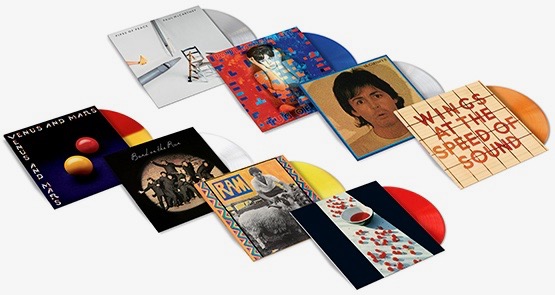 Both McCartney’s own site, and the Universal Music store site included links to order these but by the weekend both had been quickly taken down. The Universal link is just dead (and again here), while the official McCartney links for each album have since been altered and only take you through to the US Amazon site where there is no mention of the coloured vinyl whatsoever. The links are clearly for the black vinyl editions only.

Many online stores over the weekend quickly put up their own images and prices – both for individual coloured LPs and bundles – but these too have since been either completely taken down (for example SoundStage Direct in the US), or now carry an apology (for example the Bull Moose store) stating that they’ve been asked by the artist and the label NOT to sell these titles online.

To quote collectors on the Steve Hoffman Music Forums thread, many of whom have preordered and paid their money before the links just disappeared:

“Seriously, what a mess. I was actually stoked about this. Now i can see it’s probably not going to be easy…..”.

“Yes I’m worried about sites filling the orders. If the link was pulled from Paul’s site on the official announcement then I would worry about them being filled at any other site [too]. I have them pre ordered thru the link that was on his site and even thru that I’m worried I won’t get them. They seem very limited and none of the sites seem to be able to confirm they will honor the pre orders.”

It has to be said that this looks like a complete and utter stuff up my MPL and Capitol. They’ve gone into print and raised expectations, but they haven’t thought through what they were publicising, nor communicated how fans and collectors could get their hands on these eight coloured vinyl editions. Pretty bad form and does not auger well for the McCartney/Capitol/UMe relationship.

UPDATE: This just in from the Record Store Day site: Indie record stores are the ONLY physical retailers in the US to have the limited edition colored vinyl versions….. 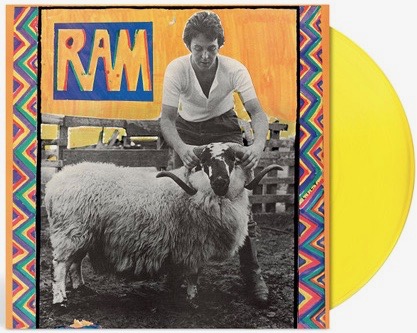 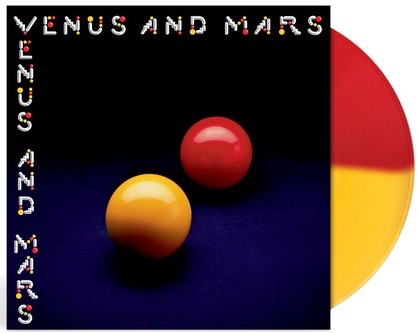 Chanced upon a small local garage sale (or yard sale) this morning and found this book:

Great Record Labels, written by Al Cimino and published by Chartwell Books in 1992, is quite an interesting overview of some of the most famous record companies, admittedly with a strong US bias. It has some really good images liberally scattered throughout, not only of the various record company labels themselves, but also many of the artists signed to the labels too.

Cimino has split his book into five broad categories covering music from the 1950’s through to the 1990’s. He starts with Sun Records in the Fifties, and ends with Def Jam in the Nineties, and works his way through most of the big labels in between – like Atlantic, Stax, Motown, Decca, A&M, CBS, Warner Brothers, Island, and Virgin – to name but a few.

There are two main segments of the book where The Beatles pop up. First is the chapter on the British EMI/Parlophone label: 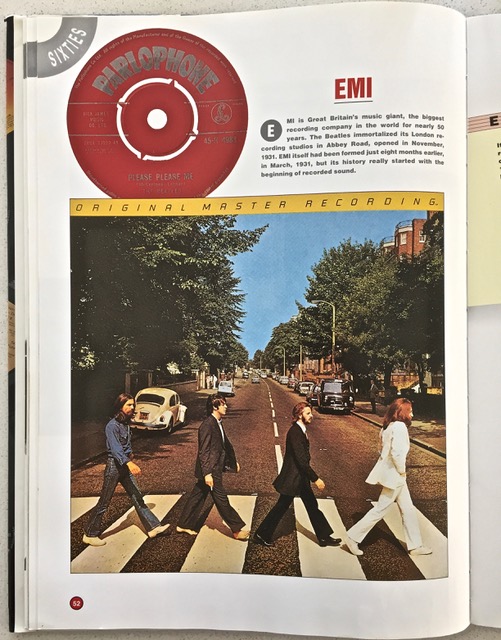 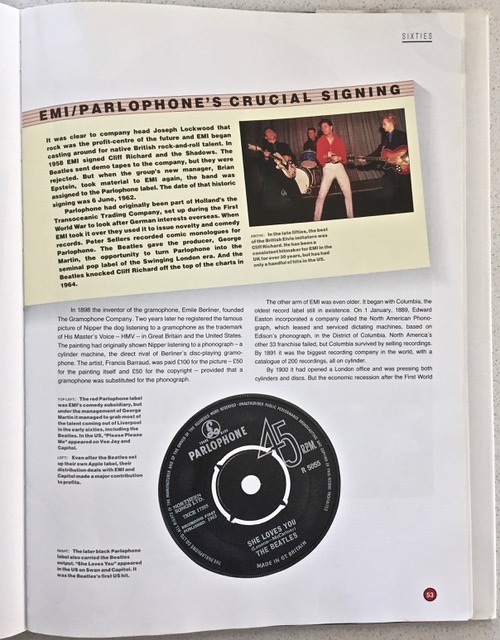 In the section on EMI’s US subsidiary Capitol Records there is only fleeting reference to The Beatles, despite the huge amounts of money they made for the company:

But to make up for that there’s no less than four pages dedicated to The Beatles’ own Apple Records: 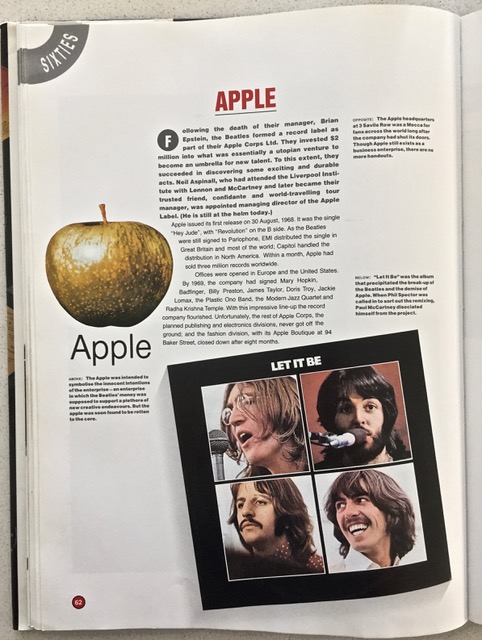 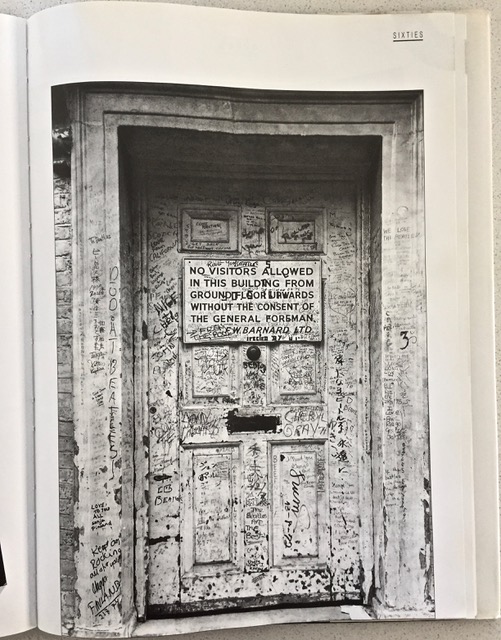 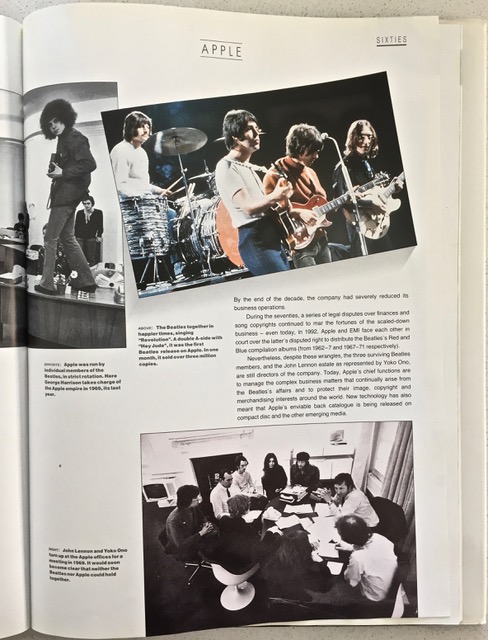 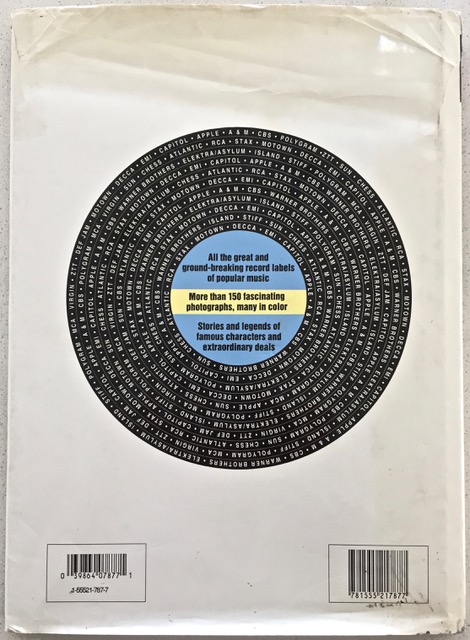 Despite being a little beat up, this is a nice little find and a good book to have in the collection.

The deal encompasses McCartney’s entire body of post-Beatles work, from his 1970 McCartney album, through his decade with Wings, to the dozens of solo and collaborative works and is a welcome home to the label where he began his career.

“This is genuinely exciting for me,” McCartney said. “Not only was Capitol my first U.S. record label, but the first record I ever bought was Gene Vincent’s ‘Be-Bop-A-Lula’ on the Capitol label.”

McCartney is currently working on a new studio album, while a comprehensive plan for the artist’s catalogue is being conceived by Capitol and Universal Music Enterprises (UMe) – in conjunction with the artist and his management team – and will be implemented beginning July 2017**. The catalogue moves to Capitol/UMe from the Concord Music Group, Paul’s previous label partner.

Capitol Music Group (CMG) Chairman and CEO, Steve Barnett said “Paul McCartney’s association with Capitol has long defined so much of our historic legacy, and all of us here are extremely proud and honored that he has chosen to come back home. Paul’s indelible contributions to our culture are second to none, and his constant evolution as an artist and performer continues to inspire and enrich the lives of countless millions of people. We are overjoyed that Paul will be creating new music for years to come, and that Capitol will be helping to present it to the world.”

** Just what this means will be interesting for collectors and fans. We’re in the middle of a huge McCartney Archive re-issue program in conjunction with Concord Records. So, what happens to that is one question that comes immediately to mind. Hopefully we’re not looking at starting over with an entirely new back-catalogue release program…..

Time for another Beatles With Records, this time courtesy of The Beatles Archive blog site.

On the afternoon of 29 August, 1965 the Beatles gave a press conference at the famous Capitol Records Tower building in Hollywood. Alan Livingston, then President of Capitol, presented the band with gold discs for sales of the US edition of their Help! soundtrack LP: 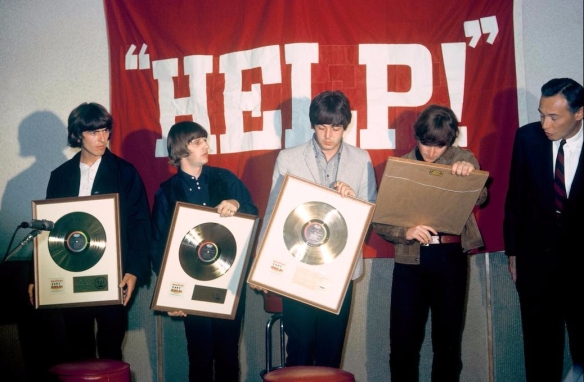 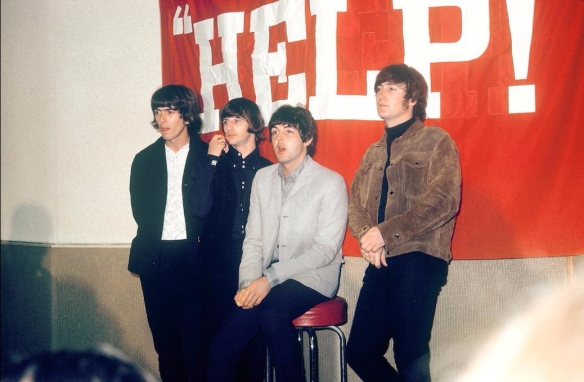 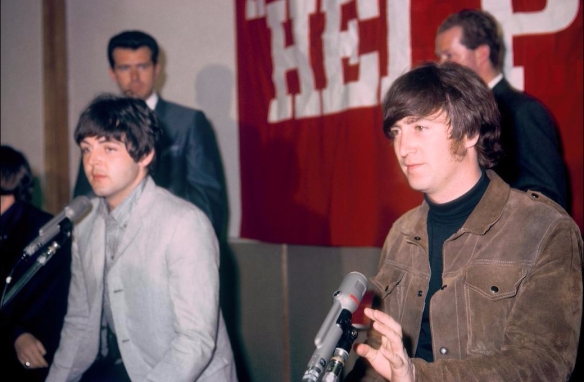 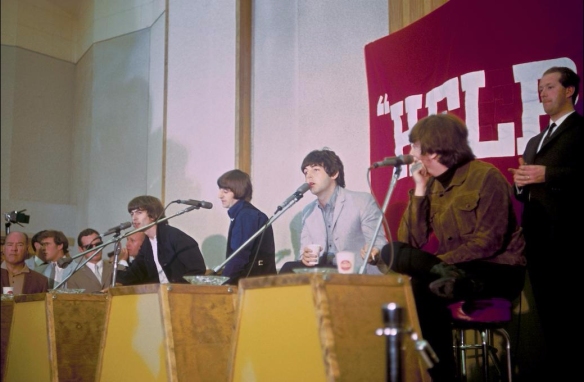 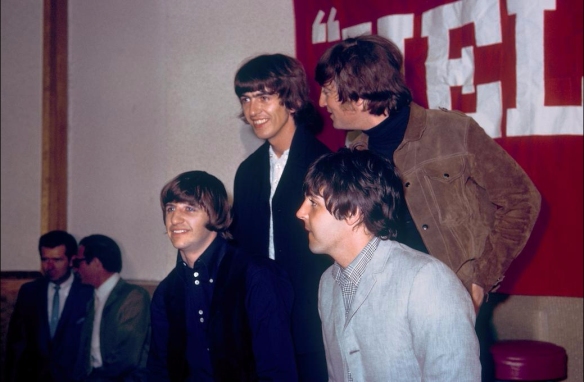 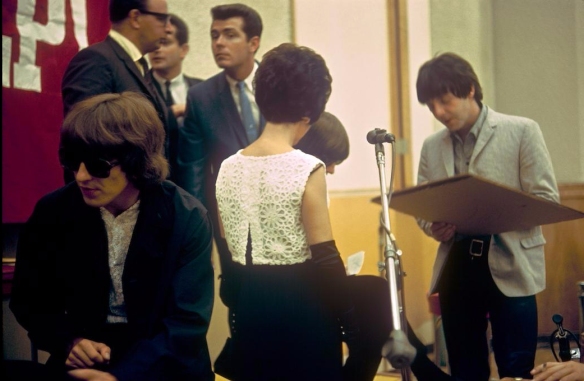 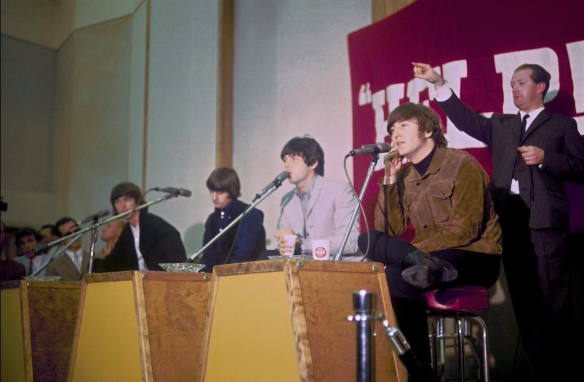 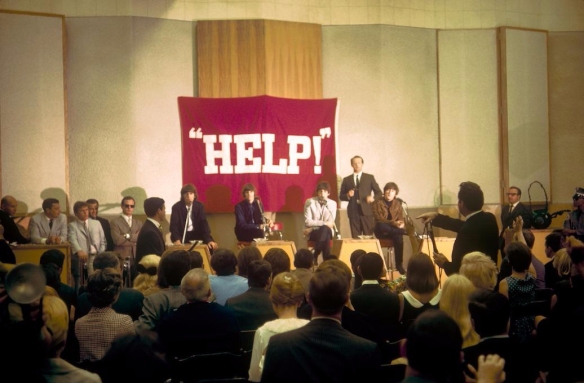 Afterwards an armored truck drove the Beatles to perform at the Hollywood Bowl, where 18,000 people attended.

See the other instalments of The Beatles With Records here.

In this the Beatles 50 Years celebrations of first making it big on the US charts, it’s interesting to watch how in 1984 Capitol Records visually marked what was then the band’s 20th anniversary….