The latest instalment in the Australian Beatles celebrations this month is the creation of a week-long “pop-up” digital radio station called The Beatles in Australia on ABC Extra.

Here’s a radio promo for the station:

You can listen in three ways. If you live in an Australian capital city and have a digital radio go the the ABC Extra channel. If you don’t have a digital radio, don’t worry – the station will be streamed live online (from next Tuesday) on the ABC Extra site. And the special programs can be accessed on your mobile device using the ABC Radio app. You can get that app here.

And here’s the official press release: 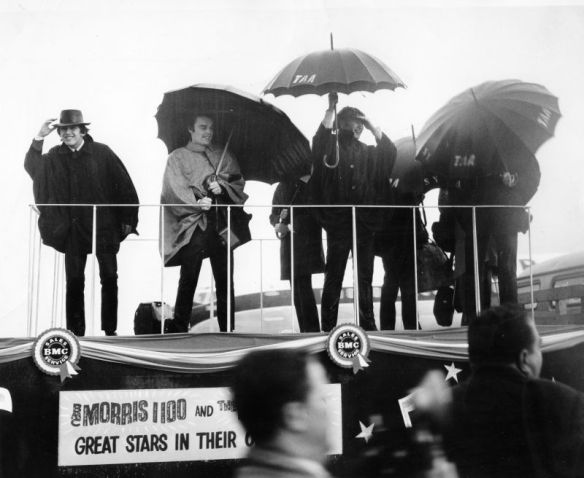 The Beatles arrive at Sydney airport in torrential rain on June 11, 1964. With them is stand-in drummer Jimmie Nicol. (Image: ABC)

THE BEATLES IN AUSTRALIA on ABC EXTRA

ABC Radio is set to launch a pop-up radio station celebrating the 50th anniversary of the Beatles concert tour of Australia in June 1964. The Beatles in Australia on ABC Extra will run from 8:00AM on Tuesday 17 June for one week. It will be available via mobile on the ABC Radio App, online and on digital radio.

The station will feature a series of specially made programs, programs from the ABC Radio archive and the music from 1964, including:

And for an earlier post on the the subject see: The Beatles in Australia

This is interesting and well worth a listen. During the the Beatles 1964 tour, radio journalist Ian Nicholls interviewed John Lennon, Paul McCartney, George Harrison, Ringo Starr and Jimmie Nicol when they visited Melbourne:

Looks like yet another McCartney III to chase down. Link in bio. #mccartneyiii #paulmccartney #beatles #thebeatles #vinylcommunity #vinylrecords
Loading Comments...