Perhaps not surprisingly the Beatles official website has gone (a bit like us) a bit Beatles in Mono mad: 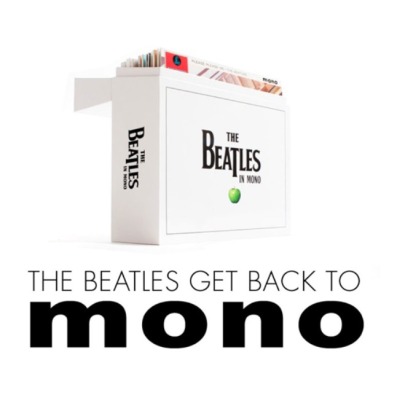 As well as various links off their front page, they have created a dedicated site which includes, amongst other pages, a media player where you can browse every title in the box set to get a sample of each track – in beautiful mono. The site comes complete with its own record player:

It must have been 27 years ago. It was a chance visit to a local record shop in Forestville, a northern suburb of Sydney, Australia.

Back then “record” stores were just that. They sold vinyl records. However, at the time many were in a state of transition. Compact Discs had just come out and the writing was very much on the wall for the humble vinyl record. At the time this record shop was in the process of getting rid of it’s vinyl, settling into the retailing of CD’s, and transitioning to become a video movie hire shop – on the way out of music all together.

I walked in for a look around and saw this small box set on one of the shelves:

You had the definite feeling that it had been on that shelf quite some time….had not sold…and the owners were definitely keen to shift it. I took it down and noticed it didn’t have a price sticker on it. I also noticed that amongst the individual vinyl singles they still had displayed that they’d opened at least one other similar box set to break up the contents and sell the EP records it contained individually.

I walked up to the counter and asked “How much is this one?”, holding up the box set. “You can have it for A$25.00”, said the guy behind the counter. Now, back then it wasn’t dirt cheap, but it was cheap for the quality of this mint, red vinyl Japanese copy of the entire Beatles Extended Play vinyl discs. I bought it.

What you see here is that same box set from all those years ago.

This Japanese release is the same as the U.K. set, except that all fifteen records inside are pressed on red vinyl and the two-record Magical Mystery Tour is in mono instead of stereo. All discs in fact are mono – except The Inner Light, which is in stereo. 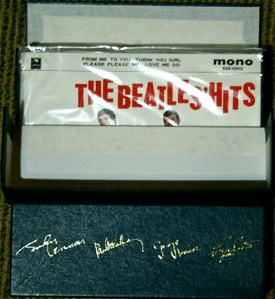 Each of the fifteen EP records inside come with plastic covers:

All the discs have plastic covers

Another interesting thing is that these discs play at 33 and 1/3 r.p.m, not the usual 45 r.p.m. There’s a paper sheet inside (in Japanese) with some information about the release:

The famed 2-record EP Magical Mystery Tour comes complete with the gatefold and booklet just like the original, and as already mentioned, is in mono:

And all the discs come pressed in a delicious-looking transparent red vinyl, and all with the original cover artwork: 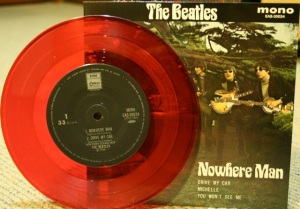 The red vinyl again – and each disc has plastic inner sleeves

There seems to be a LOT of interest in the unboxing pictures I posted of me opening up the Beatles In Mono remasters.

There’s also been a steady stream of people looking at the pics of the packaging for the Beatles “Apple” USB posted a while back.

So that left the Beatles Stereo Remastered box set still to do as an “unboxing”.

Instead of me doing it in still photos, I thought I’d have a quick look around on YouTube to see if there was a decent video example of the Stereo Box set being opened so you can see what it contains, and also to see if there was anything on the little Beatles USB that contains all the CD remasters in both MP3 and FLAC 24-bit quality, plus all the mini documentaries and the artwork for each album.

Turns out there is one video that does both the Stereo Box and a really detailed look at the packaging for the USB and the little Apple USB itself. Two for the price of one:

In searching for these I also found a guy who shows the user interface for the USB once it is plugged into your computer. You get to see what he’s seeing as he moves around the menus:

Thanks to Ian C. Rogers and zenkenobi.

In an earlier post I included an audio extract from a US National Public Radio podcast featuring Beatles historian and writer Kevin Howlett. He was talking about some of the fascinating differences between the  Stereo and Mono versions of the Beatles Remastered CDs.

Then the  other day I stumbled across this website where a guy called Jake Brown has gone to a lot of trouble to detail a lot more.  He’s spent time cutting together actual audio examples and palcing them side-by-side so we can all quickly hear what differences are. He’s also detailed in text form some other variations.  Have a read and a listen.  Thanks Jake!

In my last post I was bemoaning the fact that the official Beatles radio special released to promote the new Remastered discs didn’t go into very much detail at all about the actual process of remastering, nor the differences between the Stereo and the Mono box versions.

Well, just after that I discovered the sort of detail I was looking for in a podcast from America.

It’s a weekly show called All Songs Considered. Produced by the National Public Radio network (NPR), the program looks at all aspects of newly released music – and they have over the last few weeks (perhaps understandably) run a couple of shows about the latest Beatles releases.

One of them features a lengthy (22 mins 32 secs) and very interesting interview with Beatles historian and writer Kevin Howlett.

Howlett is the man responsible for all the words in the new booklets that accompany the new remastered stereo discs, and he wrote the essay that appears in the booklet that can be found in the Mono box set.

So, he’s an insider who knows what he’s talking about!  The All Songs Considered podcast goes into quite a lot of detail and gives frequent audio examples of the remastering process AND the difference between the stereo and mono versions.

Here’s Kevin Howlett talking specifically about the differences between mono and stereo in Sgt Pepper – an album he says was made to be heard in MONO:

A mate in the music business this week sent me a burn of an official Apple/EMI radio special produced for distribution to radio stations to promote the new Beatles Remastered box sets.

Its pretty interesting and is narrated by a cockney-accented Gary Crowley whom, from what I can gather from the web, usually works as a DJ and interviewer at the BBC Radio in London. The program runs 1 hour and 48 minutes in total, and is split into 6 segments. Crowley works his way though each official album release chronologically and the program uses interviews with John Lennon, Paul McCartney, George Harrison, Ringo Starr and George Martin to  paint a picture of how each record came about and in particular how the Beatles music changed and matured with each release.

Here’s how Gary Crowley opens the radio special, and the band talks about the early days, recording their first outing “Please Please Me”:

While there’s a lot of good stuff, the two main disappointments for me are that the program just looks at the albums, and doesn’t go into the singles that can be found on the “Past Masters” discs.  It also doesn’t go into any detail about the remastering process itself or how the whole 4 year project of painstakingly remastering each disc was run – which is a pity because I for one would have liked to have heard a bit about this aspect from those involved.

Anyway, its still a good addition to the collection and contains some really great interview extracts. One very interesting thing is that some of the music tracks are preceded by original studio banter by the band that I can only presume comes from the The Beatles Rock Band game, also released on 09.09.09.  I don’t have the game, but I’ve read that they use previously unreleased studio chat and out-takes extensively to make the experience of playing it more realistic. The makers had ready access to all the original master tapes and lifted off quite a lot of unique material. Some short grabs of that are used here I think.

Well, I guess if you are a mad keen collector you’d like to hear something else from the show.

This second extract brings us up to the “The White Album”, and the song “Helter Skelter”:

Well, as promised in an earlier post, here are some photographs of my “un-boxing” of the remastered Beatles In Mono. It’s a white box that holds 10 CDs – that is each original mono album released by the group, plus a 2 CD set called “Mono Masters”. This is like the “Past Masters” double that is available either individually or in the stereo remastered box set. However, “Mono Masters” has a slightly different track list with four different songs unique to this package. These are from “Yellow Submarine” and have never previously been issued in mono on CD: “Only A Northern Song”, “All Together Now”, “Hey Bulldog” and “It’s All Too Much”.

The box also contains a 44 page booklet with lots of great photos and text by Beatles aficionado Kevin Howlett.

Interestingly the small print on the removable promotional flyer that is tucked into the shrink wrap on the outside of the box says “Made in Japan” – so I guess EMI commissioned their Japanese pressing plant to produce these sets. It was reported that only 10,000 box sets were made. Such was the demand though that EMI quickly moved to create more. I read that another 3,000 were being produced, though this is unconfirmed. I know these box sets are expensive but given the interest, another 3,000 doesn’t seem enough for the whole world. If you have any more details on this let me know.

The packaging for the individual CDs in this set is different to the newly-designed stereo remaster covers, recreating down to the finest detail how the original UK LP record covers would have looked back in they day had you purchased them when they were first released. This includes the paper inner sleeve for the disc, all original inserts and cover art. Even how the cover was glued together is authentic. There’s also a resealable plastic outer sleeve for the cover and a small, protective plastic sleeve for the disc itself – just like those you get on LPs (at least in Australia!). You can see examples of these in photos below. Notice also that the CD labels printed on the CD echo what the original LP labels would have looked like (in the photo of “Please Please Me” below check out the very early Parlophone label).

The “Help!” and “Rubber Soul” CDs here also contain the original 1965 stereo mixes of these albums (which are different to the 1987 George Martin stereo remixes done for the first round of CD issues of the Beatles catalogue.  So, now we have three different versions to compare!) 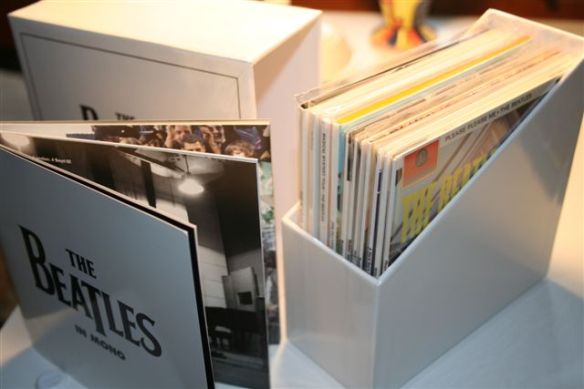 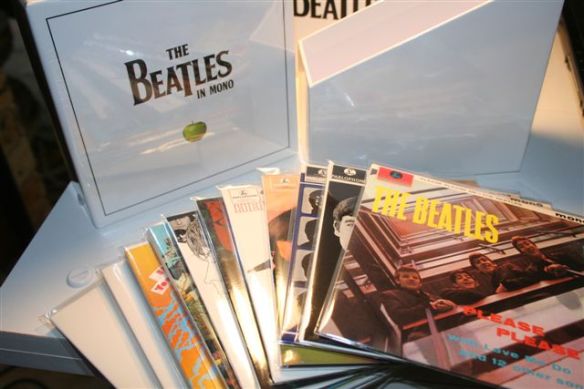 The Mono set (in their plastic covers) revealed

All the original inserts are included - like the famous "Sgt Pepper" cut-out card and the "psychedelic" pink-coloured inner-sleeve. You can also see the little plastic sleeve to help protect the CD

Detail of how they've striven to recreate the original covers. The old-fashioned fold-over tabs and even the original paper inner sleeves. Note the old Parlophone label printed on the CD

Happy Christmas Beatle people! Plus, a podcast to check out. Link in bio. #thebeatles #beatles #podcast
Beatles Blog
Create a free website or blog at WordPress.com.