The zebra crossing made famous by the Beatles has just been designated a site of national significance by the British government. Fans from around the globe flock to the crossing every day to have their photo taken walking over Abbey Road, just down from the EMI studios of the same name. The Abbey Road studios became almost a home-away-from-home for the Beatles and was where they recorded just about all their greatest songs.

The story of the heritage listing (which means it will be preserved forever from change) has been picked up by media around the world.

Here’s how the BBC World Service covered it this morning:

Paul McCartney says he’s pleased with the news, and that for him it caps off what has been a run of recent success: “It’s been a great year for me and a great year for the Beatles and hearing that the Abbey Road crossing is to be preserved is the icing on the cake.”

The photo-shoot for the album which put the pedestrian crossing on the map took just ten minutes to complete. On a sunny day on August 8th, 1969 photographer Iain Macmillan took what would become one of the best-known, copied, and parodied album covers of all time.

Getting ready to cross

People today can’t get the exact same look as the Beatles got for their cover for two reasons. First is that the crossing is not in exactly the same place it was back in 1969, and second is that Iain Macmillan was about ten feet up on a ladder. He took just six photos and it was the fifth one that was used for “Abbey Road”.

Starting the famous walk. Paul is in bare feet and getting nicely out of step....

There is a webcam (run by Abbey Road Studios) that looks over the crossing now 24 hours a day –  so even if you can’t get to London you can experience it virtually any time you like. The latest release to bear the photo that put a zebra crossing on the map is the remastered CD of “Abbey Road” – which came out last year in the new look with the white strip down the left-hand side. The legend lives on: 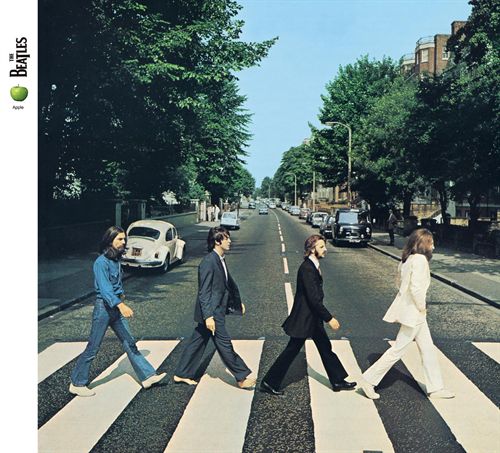 1 thought on “Abbey Road – Crossing to be Heritage Listed”