Since I posted Label Variations Part Six – Abbey Road  I’ve had a few people sending in some further great examples from their own collections.

First comes from Jerry Woods who wrote:  “Saw your blog featuring various record labels (I LOVE this stuff!!) and noticed that you didn’t have a MONO version of Abbey Road on display, so I thought I would share. Although, not a true mono mix (they never “officially” did one – and this LP sounds identical from start to finish to the Stereo version when the Stereo version is folded down to Mono) this is kind of an interesting oddity – but only a fold down to Mono from Stereo.”

Here are the labels – the record comes from Brazil:

Another nice one sent in was from a reader in New Zealand and it’s really quite unusual. It is Abbey Road on an orange Apple label – very similar (but not quite) to the orange labels used for George Harrison’s All Things Must Pass. VERY collectable:

Of course there were lots of green Apples from other countries. Nice examples here from France, Italy and a green vinyl pressing of the album from the UK: 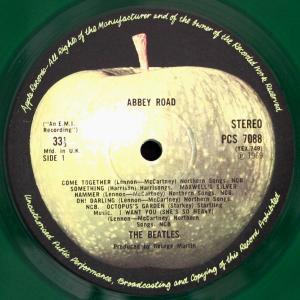 There were these two from Canada that were missed first time around. They include a couple of purple Capitol labels with two variations (one with a fairly obvious spelling mistake): 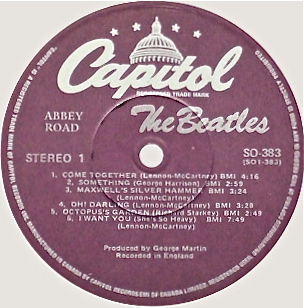 There were also a couple of other US pressings. The orange Capitol, and also the collectable Mobile Fidelity Audiophile pressing: 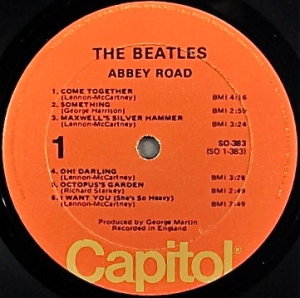 Finally, a couple of pressings of Abbey Road on a black and silver Parlophone label. This first one is from the UK:

While this other one, sent in by Andrey in Russia, is much more unusual. It is a rare UAR (Egypt?) label for Abbey Road:

(except for a couple, click on labels to see larger versions)

Ah, collecting….the variations sometimes seem endless. Thanks to everyone who emailed more labels.

You can see Label Variations Parts One, Two, Three, Four, and Five and Six, plus the Beatles Love LP variations here and here.

There’s a post on the variations of the McCartney/Fireman Electric Arguments release; McCartney’s Twin Freaks LP and singles; as well as his recent Kisses On The Bottom CD’s and LP. There is also a post on some George Harrison All Things Must Pass label variations.