For some reason today I started to think about all the different label variations there must be of Beatles LP and single vinyl discs – released over time and from a wide range of countries around the world.

Different countries have different labels of course, but there have been many label artwork changes over the years – from the original issues to the more recent re-releases. For some collectors this is a never-ending fascination. How many different label variations can they possibly find of a particular album or single?

For me as a collector it’s not the primary reason I’ll purchase an item – but for certain titles I already have it can be a factor. For some reason if browsing a stack of second-hand Beatles LPs I’ll always go looking for different labels or covers for Sgt. Pepper, Abbey Road and Let It Be. Don’t know why – I guess they where formative in my initial collection and mean more to me as records than the other titles in the collection.

As a result, over many years,  I have accumulated a few variations which I’ll share with you over the coming few weeks. (To see larger images just click on each picture).

First up – Sgt. Peppers Lonely Hearts Club Band. My very first copy of this on vinyl was the Australian pressing. Originally all Australian pressings were on Parlophone. By the time I was old enough to buy it the Parlophone label was a bright orange colour and looked like this: 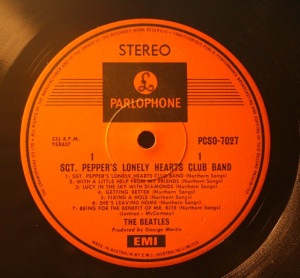 However, there where a couple of other Australian variations on the Parlophone label prior to it becoming orange like the one above. I think when Sgt. Pepper originally came out it was on a black and silver label like this: 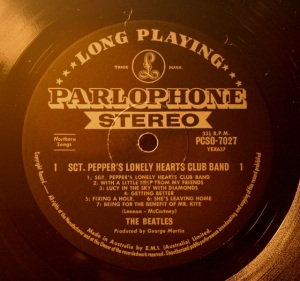 After the black and silver there was a further Australian variation (seen below) which was very much like the original UK release. It’s a black and yellow Parlophone label. Note in the picture below that this is the Mono version (denoted by the catalogue number PMCO-7027. The stereo versions are all PCSO-7027): 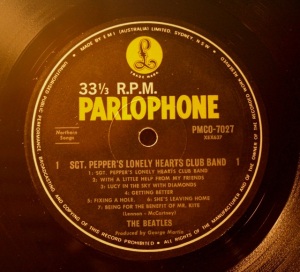 Across the Tasman Sea in New Zealand they had their own range of variations. An early NZ Parlophone was quite different to both the British and the Australian: 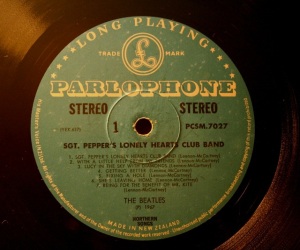 As you can see, the New Zealand version was unique. New Zealand later went on to release the entire Beatles catalogue on the Apple label, and again there are differences here to the “usual” Apple look – quite distinctive in its way and I reckon collectable for that very reason: 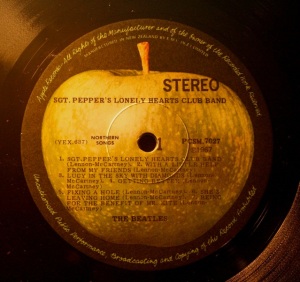 This Apple has some unusual features – most prominent among them the large STEREO lettering on the right hand side.

Back to Parlophone – on which most versions of Sgt. Pepper were/are released.  This is how the current UK version of the label looks today: 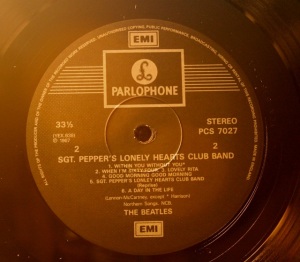 As you can see in the picture above, the Parlophone name and logo is in a large box, and the EMI label is also present twice on the label in smaller boxes. This is the label you will see if you go out tomorrow to buy a vinyl UK release of this classic Beatles record.

A couple of years ago EMI Australia re-issued Sgt. Pepper on the Parlophone label – and the label looked like this: 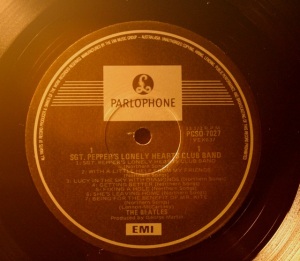 The label above comes from 1987 when a special 20th Anniversary commemorative edition of Pepper was released. The pic above is of the more common black vinyl edition, but the record was also released on limited edition red vinyl (same label though!): 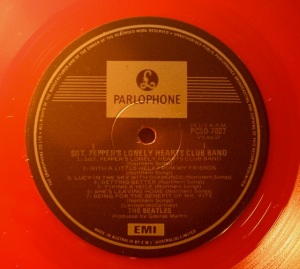 OK. On to the US now – and I only have two label variations – which is not that impressive as there are many, many more. In the USA Capitol Records, as an EMI/Parlophone US subsidiary, is the principal label you’ll find Sgt. Pepper released on. This version below is the traditional black and “rainbow” surround Capitol label: 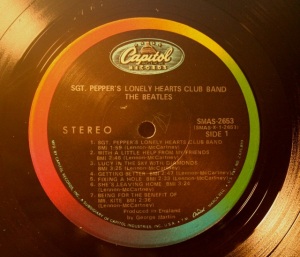 US Capitol – black and rainbow label

Later there were other Capitol variations. This one is the orange Capitol, which I bought originally in the late 1970s or early 1980s: 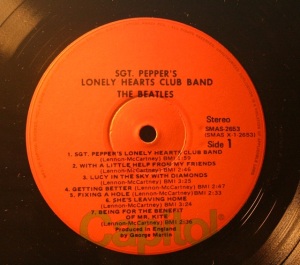 Another unusual US variation is the Sgt. Pepper released as part of the MFSL (Mobile Fidelity Sound Lab) company’s high fidelity “Original Master Recording” series. This has a different label, but also quite a different cover image as well. The series was released in a big boxed set of all the Beatles records given the MFSL treatment –  which you occasionally see come up on Ebay for many thousands of dollars. I don’t have the box set – but I do have an individual copy of Pepper – picked up at a second-hand shop for a few bucks!: 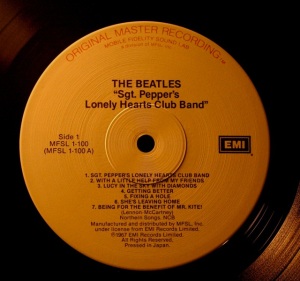 Finally, two foreign releases worthy I think of a pic of the labels. The first is from Singapore – interesting because it is so similar to the UK “black and yellow” edition: 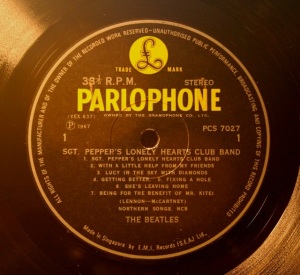 And a very different Sgt. Pepper label from Odeon, the subsidiary of EMI that released the Beatles’ records in countries like Germany and France. This one comes from Germany and is an early version fo the Odeon label there: 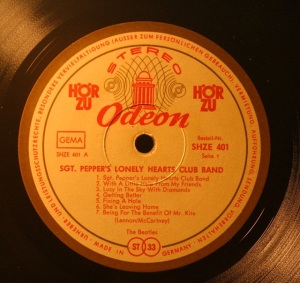 I hope you’ve enjoyed a peek at some of the label variations for Sgt. Pepper from my collection. These really only touch the surface of some of the different labels out there. If you have any other information or pictures or scans of Sgt. Pepper labels please leave a comment, or email me at: beatlesblogger@gmail.com