There are times at garage or yard sales when you are on the hunt for Beatles vinyl that the pickings can be pretty slim.

This was the case last weekend. After visiting quite a few, and with the prospect of going home empty-handed, I struck two very unusual and potentially rare items at the very last house I visited. Sitting in a box of old 45’s I found two New Zealand pressings. They’re both collectable – with this one probably being the most rare:

As you can see, it’s a copy of John Lennon’s “Imagine” – but on the NZ Parlophone label:

I must admit, despite seeing quite a few copies of this single in my time, I’ve never seen in on the black and yellow Parlophone label before.  Next post I’ll put up some of the great variety of label variations of “Imagine” from around the world.

Sitting with the John Lennon was another New Zealand single – a copy of the Beatles “Hey Jude” b/w “Revolution”. Unusually, it was in a UK cardboard outer sleeve: 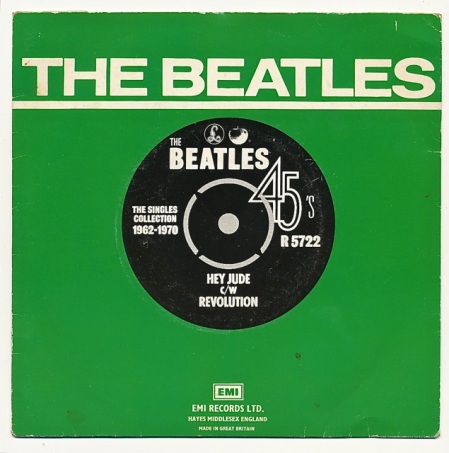 These covers were produced for the UK Beatles box set “The Beatles Collection” containing all 25 British single releases. However, inside this one there was a New Zealand Parlophone pressing of the single – again on the yellow and black Parlophone label:

In “The Beatles Collection” box set this single looks like this:

So, the copy I found is quite strange. I’m not sure if New Zealand EMI ever produced a version of this box set where they sourced the British packaging but inserted locally pressed vinyl. In some countries that sometimes happened. If so, my single has become separated from the rest of the collection at some stage….

These are the other versions of  the “Hey Jude” single in my collection. The record was released in that period just when Apple Records had first been created and so some copies in Australia also came out on the Beatles’ old label, Parlophone: 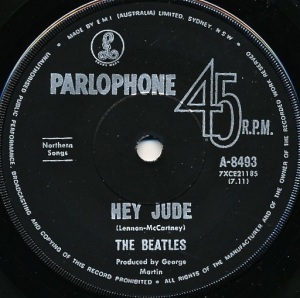 It was also released here on a standard Apple:

And here’s an example of some weird typography being used in the song title on a later Australian Apple pressing:

Finally an example of the original UK Apple version: 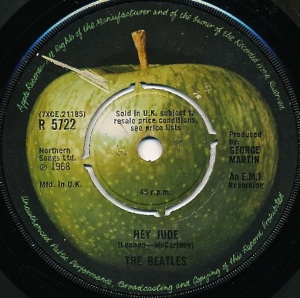 So, when garage sale hunting seems fruitless sometimes its worth going to just one more house….