Don’t know if there’s anything particularly new here – but Paul McCartney is in good form, open and relaxed in a video uploaded this week to YouTube. (It has subsequently been taken down).

McCartney was appearing at a small gathering in London, answering questions and being interviewed by British model, actor and activist Lily Cole for a global campaign called possible.

paulmaccartney.com called for musicians to submit their wishes to Cole’s possible website in order to win seats to the strictly limited-entry event. There are photos and info here. Their conversation event centred around Cole asking Sir Paul about his song ‘Hope For the Future’, part of the soundtrack to the new video game Destiny. You can read a transcript of what they talked about here.

What is possible? It’s described as a global community who help each other out. People share their time, skills and objects. Everything is always given or loaned for free.

For more on Cole see Lily Cole: From Vogue to the impossible

Cole is one of the many celebrity cameo’s in Paul’s ‘Queenie Eye’ video (you can see here and Johnny Depp pictured below): 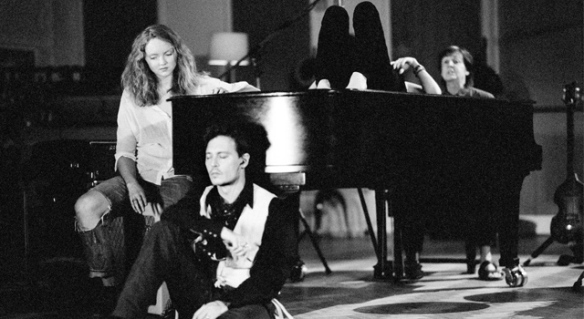 1 thought on “McCartney on Writing Songs with Lennon”