Those of you following the debacle around the 50th anniversary re-issue of the Beatles “Love Me Do” vinyl single will be interested to know of a further BIG mistake on the now re-called disc.

Not only did EMI stuff up the version of the song on the A-side of the disc (see previous post on this), it is now emerging that there is also another big mistake.

They have put the wrong catalogue number on the B-side…. 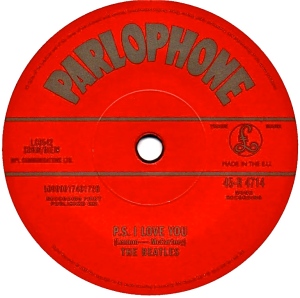 That R-4714 catalogue number actually belongs to the 1960 Matt Monro release “Portrait of My Love”:

Hence some people on Ebay getting a bit carried away with their pricing on this one….

Some are even claiming this this mistake is the 2012 equivalent of the infamous “Butcher Cover” all over again and stating that the value of the re-called “Love Me Do” will just grow and grow. What do you think? 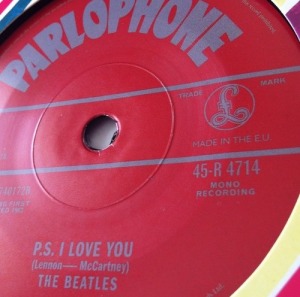 I’ve been away and out of circulation and so have missed the saga of the mis-pressed 50th anniversary single “Love Me Do”. But as reader Terry points out in the comments section for the post “Lots of Beatle Vinyl News – Part 2“,  EMI has ludicrously pressed up and issued the single with the album version by mistake.

Just before the day it was to be released they sent out messages to retailers telling them to return them to EMI. Apple ordered that all recalled stock be destroyed, which would make the single an instant collector’s item. 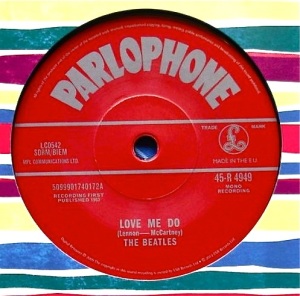 It’s apparently all due to an error in the manufacturing process where the anniversary single was pressed with the album version of the song featuring Andy White on drums and Ringo Starr relegated to tambourine. The original single version however featured Starr on drums.

I had my order for “Love Me Do” in with the HMV online store and have returned home to find no less than four confusing emails from them. The first says my order has shipped. The second says the product was faulty and was recalled. If I still want the product I should not do anything as once replacement copies are received by HMV they will be shipped to me.

Then a third email saying the order has been cancelled and the original charge has been refunded to my credit card.

“We have now received restocks, and we are currently in a position to replace your order”

This is all very confusing. The listing for the single has now disappeared from the HMV site.

Of course, some have got out and are on sale on Ebay. I’ve already seen one “Buy It Now” selling for a crazy £250 pounds (that’s over A$395!).  So, it is unclear at the moment if a corrected version will ever be issued.