Well, there’s been a lot of reportage of the remastered Beatles catalogue. And I have to say most of the praise is warranted. It sounds pretty good. More on that soon and in the next couple of days I’ll post an “unboxing” of both the Beatles In Mono box set, and the Beatles in Stereo. But first…

One of the advantages of having a contact in the record business is the occasional promotional disc coming my way. And when it comes to the Beatles, they really do it in a special way. For the release of the new Remastered series Apple produced a limited edition double CD that was sent to radio stations around the world. It’s kind of understated in that its fairly simple in its black and white packaging, but it fits with the look and feel of the big black box that contains the Stereo remastered set. The two CD’s contain a selection of 32 tracks (16 per disc) taken from across the 14 Stereo Remastered albums. Its a gatefold cardboard cover. CD 1 is printed with the old black and yellow Parlophone label. CD 2 has the Apple label. A nice touch.

The title of the CD is simple: “09.09.09 Sampler”. Copies are selling on Ebay right now for around the $100 mark, if not more. That’s the initial rush of interest price.  I reckon it’ll come back from that – but then the numbers available will slowly taper off and they’ll become increasingly harder to find. If you don’t get the chance to get one here are scans of the front cover, the inside of the gatefold, rear cover and the discs themselves. 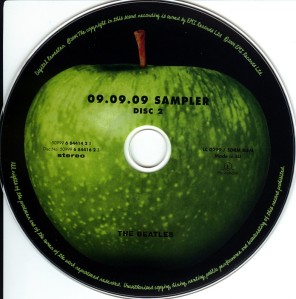