It’s the sequel to a previous title, “Fab Four FAQ: Everything Left to Know About the Beatles, and More!” This was released in 2007 and co-authored with Stuart Shea. It tells the story of the Beatles years in a new way – chronicling many previously unknown facts about the famous four and their recording career, friends, songs and lots of other stuff. It has its own dedicated web page. 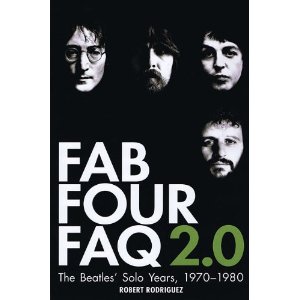 As the title suggests this one looks at the group’s solo output over a ten-year period, and like the first book you can dip into it to discover facts and info that either you forgot or never knew about the recordings and lives of the Beatles as four individual artists. As with the first book, Rodriquez has created a stand-alone web page to accompany the book release. It is really worth a visit because it has some exclusive content not published in the book – including a free chapter you can download called “You Think You’re A Groove: Album Packaging”. In it Rodriguez takes a walk through some of the album art for many solo Beatles releases. Quite an interesting read for collectors of vinyl records and the often fascinating cover artwork they contained.

(The website for the first book is worth a visit too – it has an additional four free chapters to download and read). Rodriguez is nothing if not prolific.

Check out the latest book at Amazon. And there’s a review here.