I needed to visit Australia’s national capital Canberra for work the other day and ended up staying overnight. That meant driving back to Sydney on a Saturday morning and so I had time to call into the large-ish New South Wales country town of Goulburn, which is just off the freeway on the way home.

Goulburn, I had discovered on a previous trip, has a very large second-hand book and record shop just off the main street called The Argyle Book Emporium. When I say big I’m talking an extensive old rambling period building with room after room literally filled floor-to-ceiling with books. One room at the rear is devoted to music. There’s a small selection of music-related books and magazines, and boxes and boxes of records and CDs. Its a bit frustrating as these boxes are just randomly grouped together. They’re not split out into Male Vocal, Female Vocal or Groups for example. Not even 50s, 60s ,70s and 80’s. Just everything mixed in together – making finding anything of interest a needle-in-a-haystack affair….

I didn’t have a lot of time and so I gave the LPs just a cursory flip through. I looked at a couple of boxes at the front which were easy to get to and didn’t find anything. What was more interesting was a very large pile of “Q” and “Rolling Stone” magazines. A collector had obviously off-loaded a lot of past editions that were no longer wanted. The “Rolling Stone” magazines had been pretty well picked over. Nothing really of interest to the avid Beatles collector. However, in the “Q” magazine pile I found these three editions:

The first dates way back to June 1987 – a time when we were all celebrating the 20th Anniversary of “Sgt Peppers”. Inside there are ten pages of photos and text:

Sadly, there was a “Sgt Pepper Part II” article that was due to be published in the following month’s magazine. It wasn’t on the pile of mags I found in Goulburn….oh well.

The next “Q” magazine I found featured an extensive article about Paul McCartney from July 1989. The headline on the front cover screams: He sings! He plays! He writes his own songs! For  PAUL McCARTNEY OPPORTUNITY KNOCKS! * Now available for live work! *.  Inside there’s a nine-page article about Paul. It begins: “He never expected to be doing this when he was 46 – “We thought 25 was the end of the line” – but Paul McCartney has stoutly refused to give up his day job. Engaged in rustic rehearsals for his first British tour in 10 years, and with a fresh solo album on offer [“Flowers In The Dirt”], he’s preparing once again to be public property. With mixed feelings…”. In the article there’s reference to the number of times McCartney makes reference to his father, Jim McCartney….”a Liverpool cotton broker and part-time musician who brought Paul up after his mother’s death (when McCartney was 14), and who died himself in 1976. One song on McCartney’s new album “Flowers In The Dirt”, is called “Put It There”, after a favourite phrase of his Dad’s”. 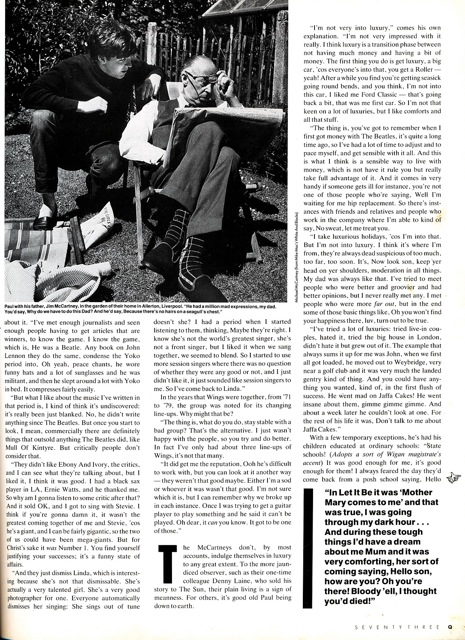 Finally, the “Q” magazine with that awesome David Bailey portrait of Paul and John on the cover. It comes from August 1999. Its a pretty simple premise on the part of “Q”. As the century draws to a close why not run a reader poll asking who are the 100 greatest stars of the 20th Century. According to “Q” readers back then the top ten are (were):

It is kind of fitting to look back and read a magazine like this (from 1999) in this year (2010) when Lennon would have turned 70, don’t you think? Kind of cements the fact that his presence could in fact be enduring. That now, a further eleven years down the track, his music is still around and he’s still held in very high regard by many. There’s an additional article right at the end of the poll headed: “John Would Have Been Proud”. It says: “Yoko Ono, the keeper of the Lennon flame and the Lennon vat of money, telephoned Q as soon as she heard about the readers’ tsunami-sixed endorsement of her late husband’s transcendental magic and generation-straddling stature….”. That article is illustrated with this beautiful photograph: