With COVID-19 restrictions now easing quite a bit in most parts of Australia (sadly still not for our friends in Melbourne, Victoria – we’re thinking of you guys!), some of the previously closed opportunity shops around Sydney are re-opening and getting back to normal.

One near us that’s been completely closed for at least six months has suddenly opened its doors once again, and so a forage there over the weekend turned up a couple of interesting items.

With what would have been John Lennon’s 80th birthday looming large this coming Friday, it was a coincidence that all three of the finds where Lennon-related.

We All Shine On – The Stories Behind Every John Lennon Song, 1970-1980 is by journalist and author Paul Du Noyer.

This is an original Australian edition paperback in a large format, dated 1997. It’s a book that’s been published and re-published numerous times over the years. According to Du Noyer’s website, the latest version is from 2020. The book is also available in German, Spanish, Italian and Czech language editions.

The title says it all: it is the track-by-track story of John Lennon’s last ten years, revealed through the music he made.

In fact we already had a revised and updated UK edition of this same title (in a small paperback format from 2010), but this earlier edition has a slightly different layout. Here are some images of what’s inside:

The second book is quite a fascinating account from former Lennon friend and personal assistant, Pete Shotton (as told to Nicholas Schaffner): 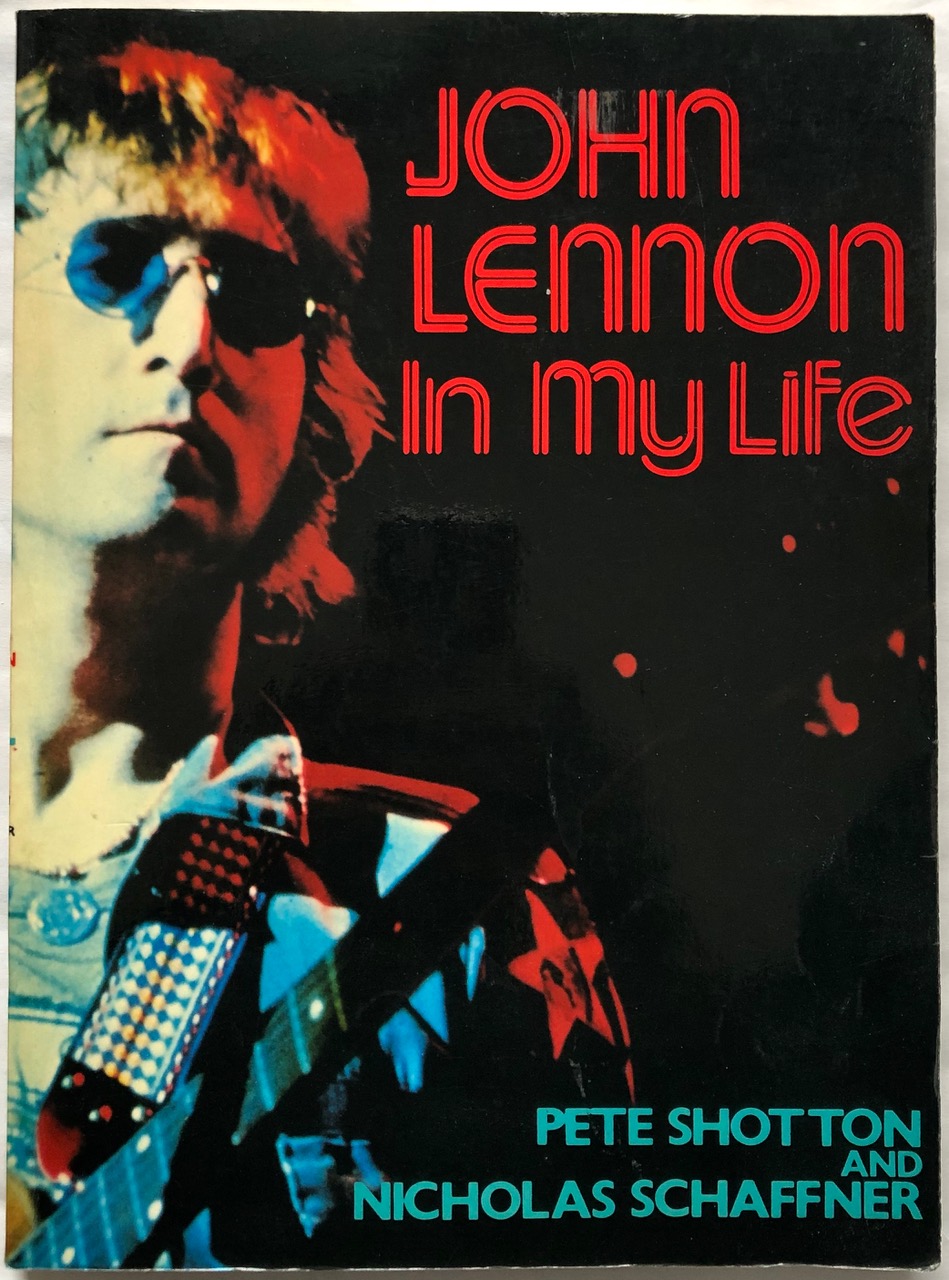 Pete Shotton’s friendship with John Lennon spanned more than thirty years, from the time they met as children in Liverpool to their last meeting in John’s Dakota apartment building in New York. They grew up together in the leafy Liverpool suburb of Woolton and Pete stayed close right through his friend’s rise to fame, wealth and stardom – not as a hanger-on, but as a trusted buddy or mate whom Lennon valued. He was someone who knew Lennon well and didn’t treat him like a star.

Nicholas Schaffner is an author and acknowledged Beatle expert – probably best known for his book The Beatles Forever. In this book Shotton and Schaffner reveal an insider’s view of many of the key public events in Beatle history, but also the private life of John Lennon throughout his career.

As you can see, the text is accompanied by many photographs and documents to help tell the story. This book is well worth seeking out if you haven’t got it already. It was first published in 1983. Here’s the rear cover (and yes, it’s a reverse image of the front):

Also in amongst the CD’s at the opportunity shop was this Apple recording. The photos are ‘as-found’ as they tell a bit of a story in themselves: 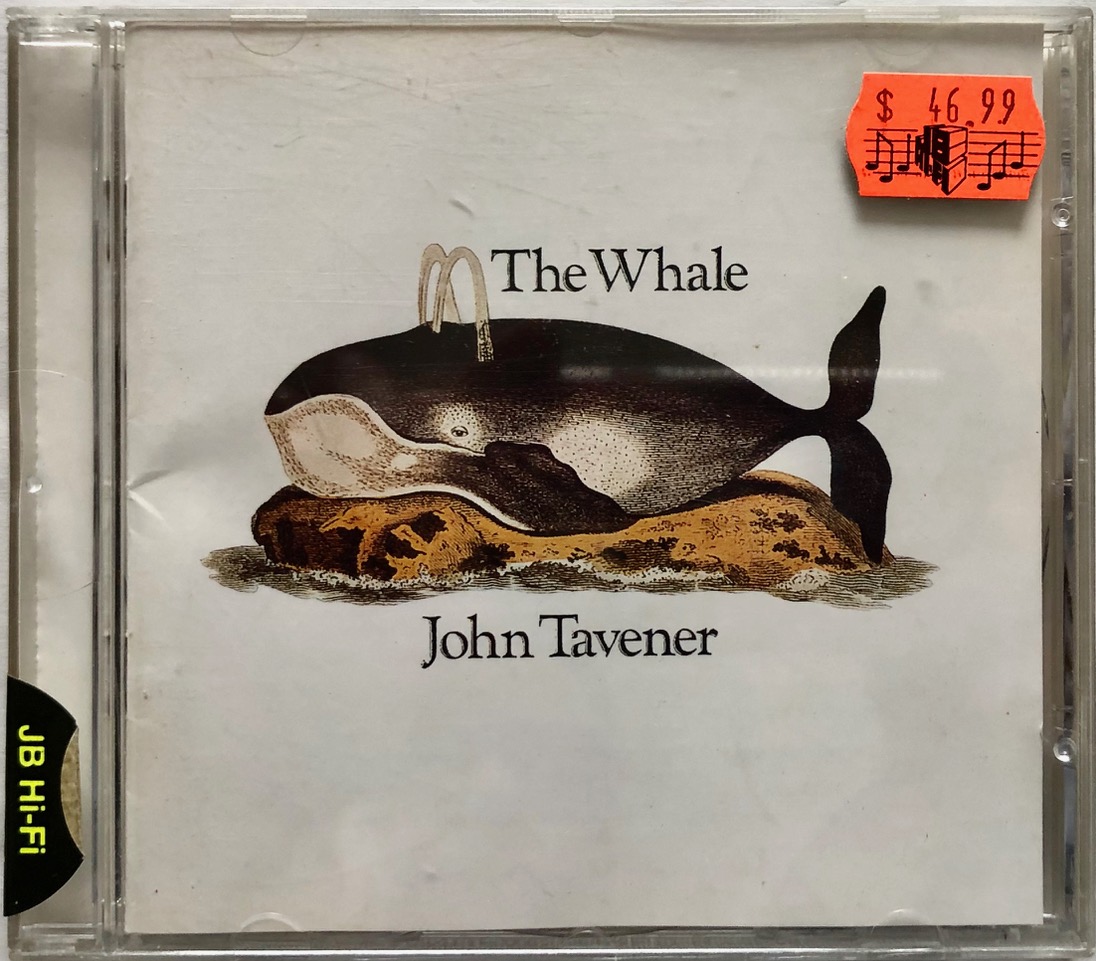 This is John Tavener’s The Whale. Tavener was a young classical composer signed to The Beatles’ Apple label in 1969. And it was John Lennon who was influential in making that happen. From the CD booklet:

“Although it was Ringo Starr who became Tavener’s main contact at Apple and who was responsible for getting The Whale onto disc, it was in fact Lennon – contrary to stories elsewhere – who took the first initiative and provided the composer with an introduction to the company. [They] first met in 1969, at a dinner party in London’s Hereford Square, and they marked the occasion by swapping tapes of their latest works. Lennon brought along his avant-garde experiments with Yoko Ono, whilst Tavener played extracts from his opera Notre Dame Des Fleurs, and the BBC recording of The Whale. On the strength of the opera, Lennon invited Tavener to join Apple, although it was The Whale which eventually sufaced on the label.”

The Whale is based on the the story of Jonah and the Whale, and has been described as both a ‘dramatic cantata’ and a ‘Biblical fantasy’. It is performed by the London Sinfonietta and the London Sinfonietta Chorus, conducted by David Atherton. It was recorded in 1970. This CD edition though came out as part of the Apple Records re-issue program in 1991/1992.

It’s interesting to note that the original purchaser of this disc (her name and address is on a sticker on the back) paid $46.99 Australian for it at the time! That’s US$33.74 by today’s exchange rate, or £26 UK pounds. That’s a lot of money – even today. It would have been a huge amount in 1992. The record store JB Hi Fi (it’s a big Australian music chain store) has put a “JB Hi Fi Special Import Sticker” on the spine of the jewel case. 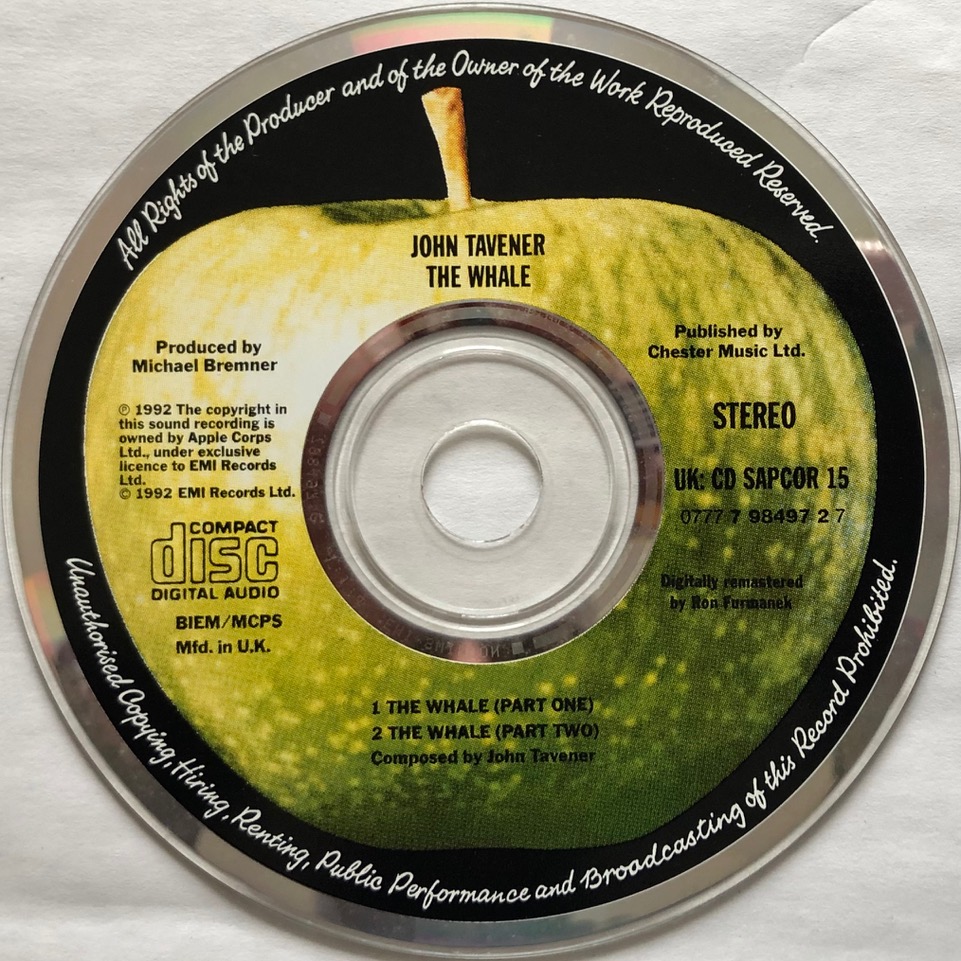 (As usual, click on any of the images to see larger versions)

Apart from the lovely selection of brand new gifts received for Christmas, we also checked out a couple of second-hand outlets while on holiday at Port Stephens on the New South Wales mid-north coast.

The first was a community-run recycling centre that turns people’s trash into income for the local community. In a couple of huge sheds they have a wide range of donated used goods for sale, including records, CDs and books. Just near the shelves full of LPs we found a box containing a large collection of old theatre and music performance programs and souvenir booklets – all in really good condition. Hunting through these we discovered this:

This is quite a thick tour magazine that was given away free at concert venues for the Paul McCartney New World Tour, which ran pretty much through the whole of 1993. It took in places like Canada, France, Germany, Denmark, Italy, Spain, the USA, UK, Japan, parts of South America, and Australia – hence this magazine/program being re-discovered in a shed in a little place called Soldiers Point! You can see one of the Sydney New World Tour set lists here.

The tour was in support of the Off The Ground album: 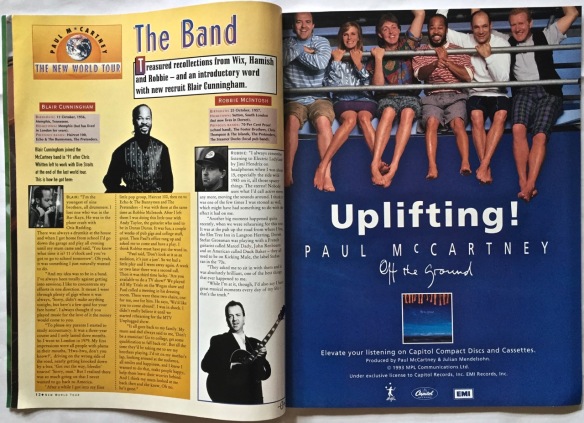 Inside the tour magazine there are some great articles and photos, including this shot below of the band at work in their rehearsal room – one which I’d not seen before. It also lists the range of instruments each person plays:

There are also short bios for each band member, articles on key members of the backstage crew, plus the content goes much wider with sections dedicated to raising awareness about causes close to the McCartneys’ hearts, including saving a local hospital, the environment, and animal cruelty:

In between are some interesting articles on previous projects, like this one on the Unplugged (The Official Bootleg) album from 1991:

All the content in the The New World Tour magazine is edited by Paul Du Noyer, who also featured in our Christmas list of books – and, coincidently, in another nice holiday find.

Every month the local church at Anna Bay just near Port Stephens holds a market where different traders can offer their goods for sale. One of them was a guy specialising in secondhand music books and CDs, where we found this book, also by Paul Du Noyer:

It’s a great reference book to have in the collection with the details and stories behind every song John Lennon released as a solo artist: 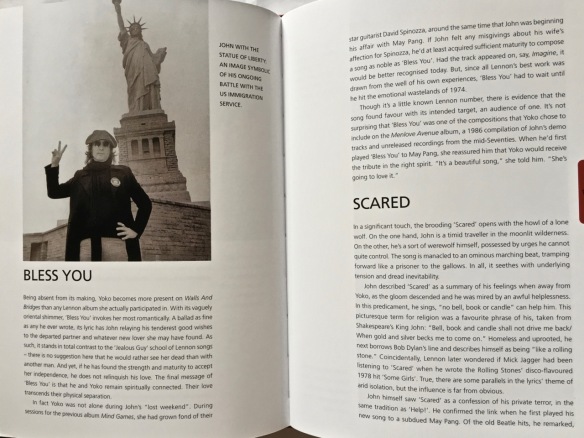 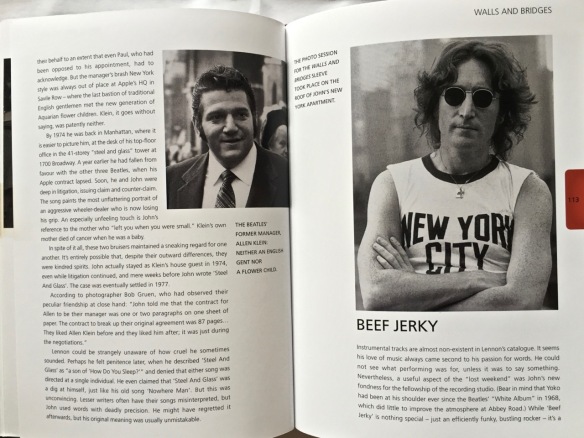 First published in 1997, this revised and updated edition was released in 2010. Each song entry is accompanied by some interesting photos, and it is a really handy book to have when researching the work of John Lennon. I believe there’s an even more recent update called We All Shine On.

We here at beatlesblogger received some nice gifts over the holiday season.

First up is Ringo Starr’s new book Photograph. It is a beautiful hardback book, in a larger format, coffee-table style: 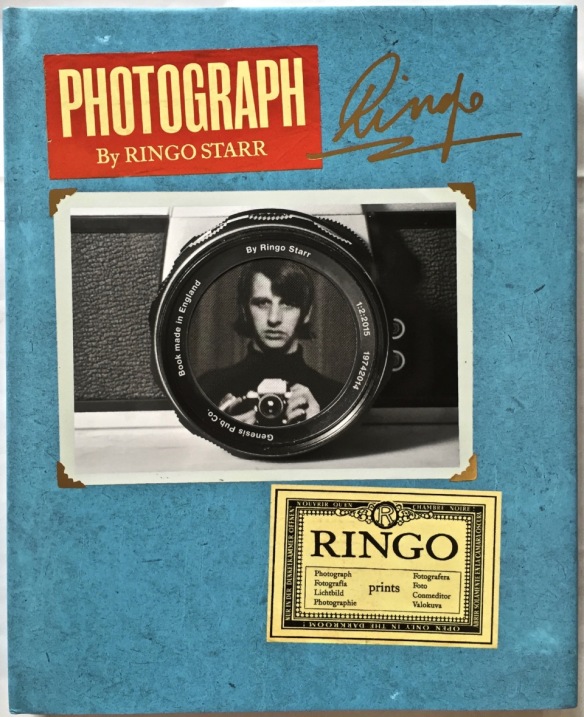 Initially released by Genesis Books in a lavish, strictly limited edition, the book has now been released as a more attainable “open edition” for us mere mortals.

That photo you can see of a young Ringo on the cover image above is actually him looking out of a neat cut-out hole around the camera lens on the book’s dust cover. It is a nice little extra production touch:

Inside are some fantastic photos taken by Ringo himself over many years:

When you see images of the early Beatles you sometimes see them carrying their own cameras – and there are lots of pictures out there of the band taking photographs of each other and documenting for themselves what was happening around them. Each Beatle therefore would have hundreds of their own great informal shots tucked away – just like we all do – in albums, in storage boxes, or in closets.

Ringo’s personal photos were thought to be lost forever – until one day he re-discovered them. “We finally found them in a basement in storage” he told Rolling Stone magazine. “I was shocked…..we even found two books of negatives.” So now he’s compiled them in this book, along with over 15,000 words of commentary on where and why each photo was taken. Many of the images have never before been published: 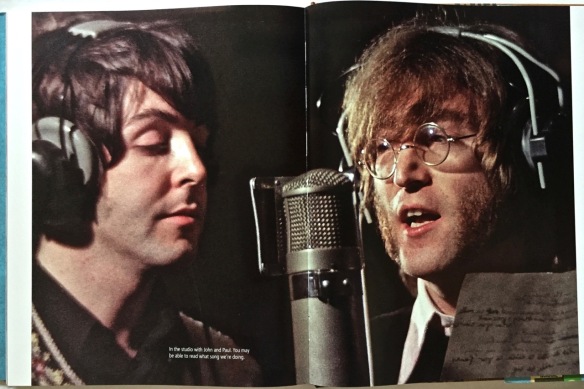 It is fantastic to flip through. Each page has a new surprise.

We also got a copy of the Barry Miles book The Zapple Diaries – The Rise and Fall of the Last Beatles Label:

Miles is a frequent Beatle biographer and author, and he’s something of an insider – having been the manager of Zapple Records when it was first (and only very briefly) established back in 1969. Zapple was one of the many subsidiaries of the original Beatles’ Apple Corps Ltd. It was a label responsible for releasing the more avant-garde and experimental bands, poets and performers that the Beatles hoped to champion. As label manager, Miles had a ringside seat observing the ructions of the company, and the Beatles themselves in the process of self-destructing. We read of the big plans he had for the label, and how they were bitterly thwarted.

The book is richly illustrated. It tells the story from the perspective of someone very close to the action:

This is probably more one for aficionados of the Apple Records label, its establishment, aims and objectives, and some of the more obscure of its releases, but I’m looking forward to reading this book, cover-to-cover:

As the title suggests, this is a new collection of Conversations with McCartney, over the period 1979 to the present. Du Noyer has spoken with him numerous times over that period – mostly for independently commissioned pieces for some of the best UK music magazines. It should be said however that Du Noyer has also been employed by McCartney’s MPL Communications company to produce content for them (tour magazines, album sleevenotes, etc.), and the book was done with the company’s assistance. Nevertheless, this looks to be a unique insight into what it means to be Paul McCartney and a very interesting work. 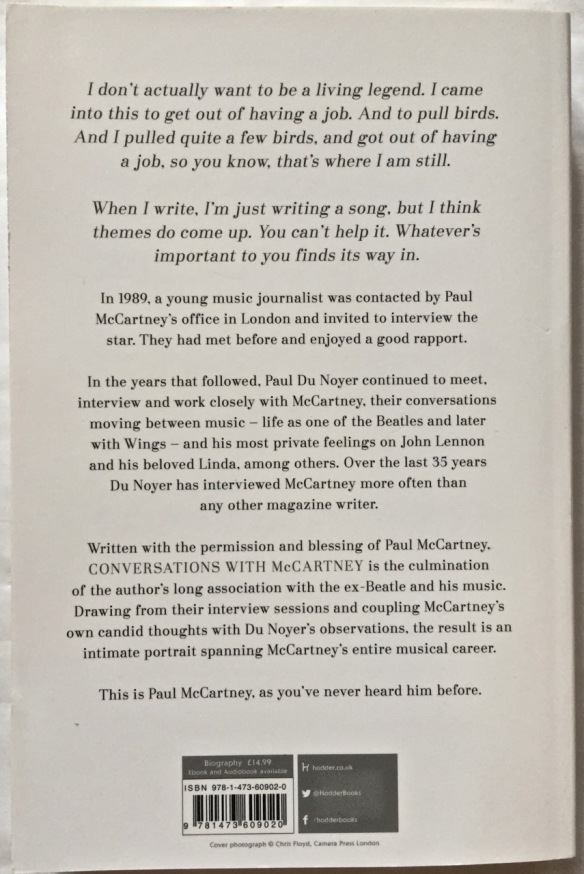