The fine art auctioneers Christie’s in New York will next month auction some pretty impressive and previously unseen Beatles photographs from 1964.

They come from a collection of photos of the group shot by photographer Mike Mitchell. At age 18 he was at the Washington Coliseum in Washington, D.C. for the Beatle’s first US concert, two days after their historic Ed Sullivan appearance.

Christie’s is calling the event “The Beatles Illuminated: The Discovered Works of Mike Mitchell“. Their website says it’s:

“….a sale comprised of nearly 50 lots of unpublished and never-before-seen photographs of the Beatles’ first hysteria-inducing visits to America in 1964. Shot in black and white by photographer Mike Mitchell when he was just 18 years old, the images have been filed away for nearly fifty years. The complete rediscovered collection is expected to realize in the region of $100,000.

Over eight thousand fans packed into the Washington Coliseum on February 11th, 1964 and they were treated to the Beatles at their very best. The Washington Coliseum was not only their first American concert but also by far the largest venue in which the Beatles had ever played. Its unique setup – it was often used for boxing matches – meant that the Beatles were surrounded on all sides by an adoring, cheering audience. The Beatles were clearly delighted and having a great time on stage, sharing all of the enthusiasm of the crowd. Here they were, performing in America, the land of their musical heroes and cultural icons, the home of Elvis and Chuck Berry – who’s “Roll Over Beethoven” was chosen by the Beatles to begin the show – and Little Richard, who’s “Long Tall Sally” was chosen to end it. The concert given at the Washington Coliseum was part of a defining moment in the Beatles’ career, and it remains both an important event and a notable place in their story. And Mike Mitchell was there to capture it.”

Yahoo has quite a nice photo gallery here. There’s an absolute ripper shot of Ringo in full flight and absolutley enjoying himself: 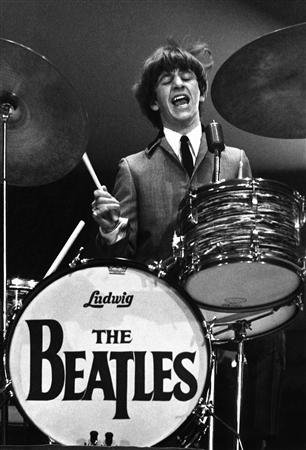