How does Paul McCartney write a song? What goes through his mind when he’s at the piano? What’s an “oobley” chord? And where do the lyrics come from when he’s noodling away?

Those were some of the questions Alan Alda asked Sir Paul when they sat down together for a lengthy chat recently on Alda’s regular podcast called Clear+Vivid: 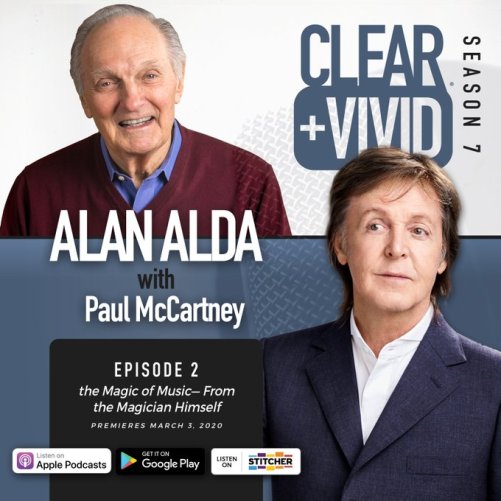 McCartney has been interviewed more times than most people have had hot breakfasts, and so he can at times resort to re-telling the same, oft-told stories from his past. Frequently when you hear him interviewed there’s very little new or interesting on offer.

But, for the most part, that’s not the case here. In this podcast its more of a discussion, a meeting of the minds and Alda puts McCartney at ease. He sounds relaxed and at times unguarded. As the PR blurb says, we “…learn some of the never before heard secrets behind this legendary musician’s magic.”

Since the terrifc Something About The Beatles podcast became Robert Rodriguez presenting solo (with frequent guest co-hosts), we’ve been wondering what happened to his original partner, Richard Buskin – who mysteriously disappeared from the show a while back.

Well, it turns out he’s struck out in the new direction with a new co-host and has launched an equally clever and entertaining Beatle-related podcast called Swinging Through the Sixties.

Swinging Through the Sixties sees the knowledgable and funny Buskin joined by Beatle fanatic and collector Eric Taros. Together they present a quirky romp through the music of the 1960s. Some episodes are purely about the Fab Four while others range more widely, but always with an ever-present undercurrent of how The Beatles fitted into whatever topic they have chosen to cover.

It is good stuff and worth checking out.

We raved about a new podcast called Something About the Beatles back when it first came out. SATB is hosted by two Beatle experts and authors Robert Rodriguez and Richard Buskin.

If you need any convincing to make this a regular download, have a listen to Episode 11.

It’s a great example of how interesting this podcast is. The two look into the instruments that the Beatles used on stage and in the studio – and how these directly impacted the sound and their creative push to always try new ways of making music. Buskin interviews Andy Babiuk, author of Beatles Gear (and the newly-published Rolling Stones Gear), but also talks with his co-host Rodriguez, delving into their own extensive knowledge and understanding of the music. Great stuff.

It is episodes like this that make it well worth subscribing to this podcast – which comes out roughly once a month:

In newspaper terms this is called ‘burying the lead’. Much fuss being made about an IMAX hour-long cut of the rooftop concert to be screened only in the USA when the real news is that the full version of Peter Jackson’s #thebeatlesgetback film is to be released on Blu-ray and DVD in early February. Link in bio for more. #beatles #thebeatles #peterjackson
Loading Comments...
%d bloggers like this: